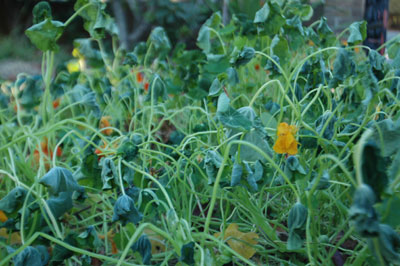 The first frost has killed my nasturtiums. There is a sadness to farewelling these beautiful flowers but also a huge sense of relief. At last winter is here. In Ian Lowe’s book “Living in the Hothouse” he lists climate predictions for a range of weather events around Australia. These include a reduction in the number of frosty nights. In Orange, where I used to live, and which relies heavily on sub-zero minimum temperatures for many of its crops, the prediction is to go from the current average of 38 sub-zero days to as low as 18 – LESS THAN HALF – by 2030. (At the top of the range, 32 sub-zero days is not quite as scary.) It was Ian Lowe’s book that had the same life-changing effect on me that Tim Flannery’s “The Weathermakers” has had on other people.

Disturbingly, as the globe is warming, we are having more extreme weather events of all types. It is, for example, difficult to comprehend that in a warming world we are also having some of the coldest temperatures on record. Warming leads to a disruption of ocean currents, wind patterns, more severe evaporation and then much heavier downpours, more electrical storms … essentially to climate chaos or “global weirding”.

The lowest recorded temperatures in Australia have been in the Snowy Mountains of New South Wales. Charlotte Pass recorded -23.0Â°C on the 28th or 29th June (depending on which report you read) 1994, with a number of other locations recording temperatures below -15Â°C.

Interestingly these low temperatures occurred within what has been described as the 14 year period which contains the 10 hottest years on record.

In my researching of weather records I found out that the lowest recorded temperature in Antarctica was at Vostock. It went down to -89.2C in 1983. OMG!!!!!

On Mother’s Day, the day after I wrote my blog “Murder as Therapy” (May 12) I bumped into some friends outside the Growers Market who were horrified by my murderous attacks on snails and cabbage white butterflies. Today Alex sent me a cartoon he made in response to what I said and I’ve been laughing my head off all evening. Humour really is the best antidote for the bad news we’re receiving daily. 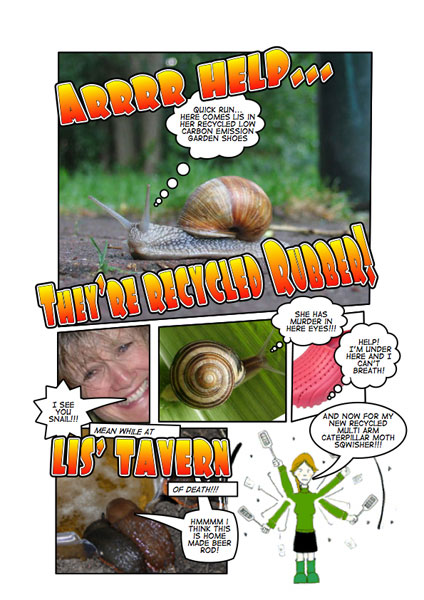 He also sent me some beautiful photos of his and Chris’s garden in Blackheath from which he’ll be bringing fresh veges to the Community Market on Sunday. There is something really special about knowing that your food has been grown by really nice people in a really beautiful setting. 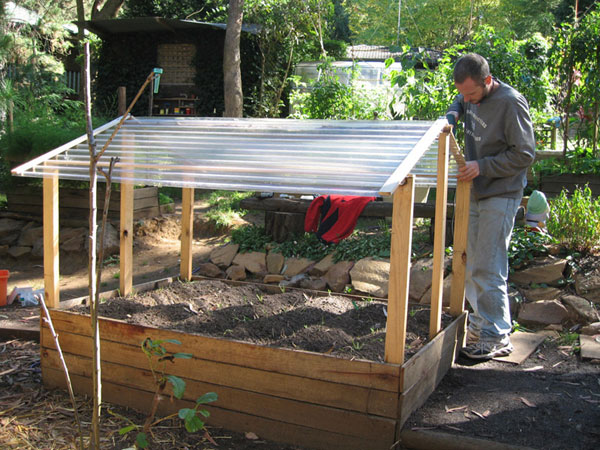 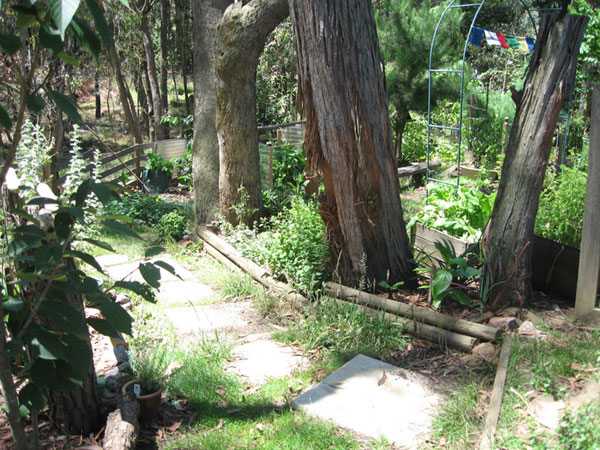 This morning Ian said he was fantasizing about a traditional German dinner with potato dumplings. In the past I’ve only ever made dumplings out of a packet. Today, for the first time, I gave it a shot and used some of the potatoes we still had left out of the garden to make real potato dumplings.

I really am turning into my mother. I even found myself sitting on the couch with the boys helping them to knit their own scarves this evening … just like she used to do with me. Helping the boys learn to knit, despite the fact that I was achingly tired, made me feel like I was being a “real mother”… in the sense of passing down learned skills from generation to generation, and also just simply because I was making the time to be together with them.

On the political front I sent out lots and lots of emails – to Get Up, The Sydney Morning Herald, to lots of new “Green” organisations, to Blue Mountains City Council … and to my mailing list.

I also wrote a letter to Mr Howard because I was so upset that he was not acting more urgently on a carbon tax or cap and trade emissions scheme. Not sure if I’ll send it yet. Might need to take a deep breath and think it over.

You have finally acknowledged that global warming is happening but I am very concerned that you aren’t acting far more quickly to introduce emissions reductions schemes. According to James Hansen from NASA we have only 8 1/2 years to a tipping point beyond which leading scientists and the IPCC believe we will no longer have any control over catastrophic climate change. If, as happened with the EU, your scheme does not immediately deliver the necessary reductions, we will have lost the window of opportunity to correct errors by having left our run too late.

In the period leading up to the disaster of Hurricane Katrina the estimated cost of fixing the levees was 59 billion dollars. The clean up bill after the Hurricane has been reported as being as high as 200 billion dollars. In retrospect 59 billion would have been cheap. This figure does not take into account human suffering and the ongoing dislocation of society. Most economists are arguing that it would be cheaper to act now than to wait too long.

Straight after Cyclone Larry hit Queensland, Cyclone Monica passed across Northern Australia. Cyclone Monica was bigger than Hurricane Katrina. What have you put in place for similar occurrences?

According to our local MP Kerry Bartlett (30th May, 2007 BM Gazette, p. 40) the mining industry generates only 5.6% of our GDP and provides only 1.3% of Australian jobs. If this is the case then I cannot follow your argument that to act on climate change would greatly damage jobs. Surely the many new jobs and investments associated with the growth of renewable energy industries could easily compensate for losses in an area that is only 1.3% of Australian jobs.

As I know from every area I have ever worked in, aspirational targets rarely lead to desired outcomes. It is essential to make targets mandatory for real action to happen. We have 8 1/2 years – not to start action, but to have completed our emissions reductions. It is not a long time. Please act immediately to introduce a carbon taxing policy or cap and trade emissions scheme that