I started the day reading about how Earth Day Volunteers in Washington yesterday were left with a sickening feeling after their annual cleanup of the Anacostia River.

“I feel sad to see the water like this,” said Malik Fitzgerald, 15. “The water is just a reflection of us. The way we treat it is how it’s going to turn out.”

“The amount of Styrofoam was amazing,” said Cornell Club member Cheryl Martson. “I will never use Styrofoam again.”

According to the National Oceanic and Atmospheric Administration the key is getting more residents to care about the river.

“I must have picked up 300 soda bottles this morning,” Barton said. “People see trees and green and ospreys here and say, ‘Oh, the river’s fine.’ But what they don’t see are the contaminants in the sediments . . . the tumors on the fish here. . . The more people recognize what a beautiful place this can be, the more they’ll be upset about the trash.” 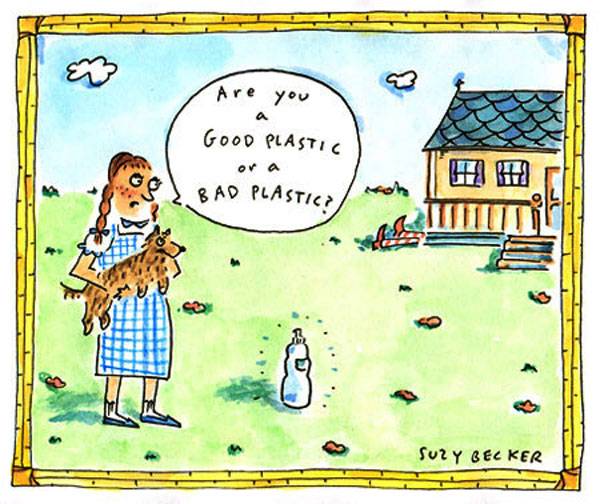 Ian and I decided today that we would no longer buy our milk in plastic containers. While I doubt that we’ll be able to keep up with Envirowoman in her battle against plastics (thanks to her for this cartoon) we’ll at least start by trying to find alternatives for all our food packaging. There are a multitude of reasons for this – not least of which are the health problems associated with plastic, the waste disposal problem, the energy required to make the plastic and the fact that 8% of the world’s annual oil production goes into making plastics. The amount of petroleum used to make a plastic bag would drive a car up to 11km – Australians use 3.92 billion plastic bags each year so that’s almost 44 billion miles in a car! Making bottles to meet Americans’ demand for bottled water requires more than 1.5 million barrels of oil annually, enough to fuel some 100,000 U.S. cars for a year. Worldwide, some 2.7 million tons of plastic are used to bottle water alone each year.

The first step really is to try and avoid buying anything with packaging – the trouble is that even the local butcher puts the meat into a plastic bag and then a paper bag as well. At least I resisted the plastic bags for collecting food at the fruit shop today and I’ll have to look for containers to take along with me to the butcher and deli.

Trying to find the best alternative packaging for foods that NEED to be packaged has been much harder than I could possibly have imagined. I’d initially assumed that milk in cardboard cartons would be the better option but subsequently found out today that milk cartons are now coated in plastic, not wax, as I’d always assumed.

Butter was easy – I found a beautiful old glass butter dish at the local secondhand shop so now we’ll just buy butter in greaseproof paper as we did when I was a kid. (I’m saving the wrappers for greasing baking trays.)

Metal cans (eg for olive oil) are not as good as they seem, as most are now lined with plastic and even the plastic bags that are being described as biodegradable, turn out to be plastic combined with tapioca. Tapioca is easily broken down by micro organisms in landfill, but than seeds the area with the polyethylene fragments that no micro organism will consume.

I’m hoping that if I can find enough old glass butter dishes and lids in second hand shops I’ll also have a good alternative to gladwrap. Apparently we use enough plastic wrap to wrap all of Texas every year. Well not me anymore – this is the last roll of gladwrap that’s coming in our door!

Tetrapaks are also hard to recycle as they are a mixture of aluminium, cardboard and plastic but apparently you can make your own soy milk??

Researching the health aspects of plastics has turned me off them for life. Polycarbonate water bottles (labeled #7) contain bisphenol A (BPA), which leaches from the plastic even at room temperature and has been linked to chromosome damage and hormone disruption. These are the types of plastic Nalgene water bottles found in sports stores. Commonly, the bottled water you purchase is in #1 PET or PETE bottles (polyethylene terephthalate) , which may leach DEHA, a known carcinogen, if used more than once. Additionally, when refilled, either type of plastic bottles are likely to contain potentially harmful bacteria. Washing bottles with hot water and detergent or a rinse with bleach will sanitize them, but also leaches harmful chemicals out of the plastic.

How do you know which ones are safe?

Never use
Food or drinks heated in plastic containers in a microwave.
Styrofoam cups (polystyrene #6), especially for hot liquids.
#7 polycarbonate (Nalgene) water bottles
Plastic baby bottles. If you must use bottles, use only glass baby bottles with silicone, not latex, nipples.
Do not reuse plastic water bottles.

Polyvinyl chloride (PVC, Vinyl) creates dioxins during manufacture, during the useful lifetime of the product, and upon disposal. Dioxin is a long-lived known carcinogen that settles in our fatty tissues and the fatty tissues of other animals. It also disrupts our hormonal systems and may cause reproductive- and immune-system damage in our bodies and the bodies of our fellow living beings. Dioxins cause particular harm to people living near PVC plants and waste incinerators.

Some goes into landfill, where it leaks toxic waste into the soil, as well as damaging the quality of life for local communities. Who wants a large, smelly landfill site near their home? Some is incinerated, releasing CO2 and other pollutants into the atmosphere, and requiring energy – more greenhouse gases – to run the incinerators.

But it gets worse. A good deal is sent abroad, to towns like Lian Jiao, in Southern China, where migrant workers fleeing rural poverty are paid $4 a day to work – with their children – sorting through rubbish.

Babies are fed by their mothers in grimy workshops surrounded by piles of British refuse. The local environment is toxic, air and water polluted by the by-products of the recycling industry.

And this is a small example of the true cost of our obsession what is viagra soft tabs with prepackaged food.

As my political action I voted in a Sydney Morning Herald poll for the first time because I was so upset about what Prime Minister John Howard said about renewable energy:

“The idea that is floated by the Greens and some sections of the Labor Party – this fuzzy warm idea is that if you have a lot more renewables you could run power stations. That is ridiculous.”

I then emailed friends and drew their attention to the article and the poll too.

I also rang our Local Councillor Terri Hamilton to ask her about where plans were at for a bike track linking villages in the Blue Mountains. Offered her my support to work towards this, then rang the person she suggested at Council and offered her my support as well. We’d discussed this at the C.A.N. meeting and were in agreement that we really need a biketrack from Mt Victoria to Katoomba – the roads are far too unsafe to ride on. The more people that can get involved in this the better chance we have of making it happen.

5 thoughts on “What did we do before Glad came along?”