Still upset about Howard’s comments on Renewable Energy I sent a letter to The Editor of the Sydney Morning Herald for the first time. Emails make it so easy to do and I was inspired by all the other responses that came from people around the country:

PM’s speech a triumph for the nay-sayers
John Howard says “Australia emits less greenhouse gases in a year than the United States or China emit in a month” (“Moral challenge is to build a prosperous, secure land”, April 24). Given the disparity in population between Australia and either of those countries, if it were any closer I would be horrified. He then says this disproportion means that climate change is not “the overwhelming moral challenge for this generation of Australians”. This from a man who has overseen failure in so many moral challenges – involvement in an illegal war, the abuse and dispersal of refugees in need of assistance, the locking up without trial and deportation of Australian citizens, the disowning of David Hicks and the destruction of workers’ rights to name but a few.

For Mr Howard, after so many moral failures, to then postulate that the real moral challenge is for Australia to be “at ease with the world and with itself” is to show how insular he is, how lacking his grasp of the reality of global warming, how desperate he is to hold office and how utterly unsuitable he is to do so.

I received this cartoon by The Age Newspaper’s Ron Tandberg via email today: 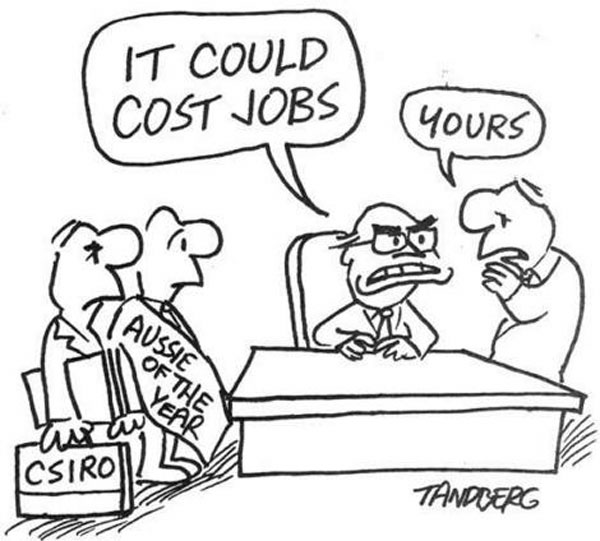 John Howard’s constant endeavours to downplay the importance of global warming reflects badly on his morality. Surely, a threat to our existence requires those who have political power to take it terribly seriously and prepare the nation for the very significant adjustments required.

A crucial question which Howard has failed to answer is how will an increasingly inward-looking nation engage effectively with an integrated and globalised world.

Ethics 101 according to Howard: it’s OK to pour, say, cyanide into the ocean, as long as the other guy is pouring in 12 times as much.

So John Howard now has a vision for how Australia will be in 2020. Pity he couldn’t have given more than eight weeks’ notice that the rivers were going to run dry.

While we admire the PM’s enthusiasm for protecting our economic interests, isn’t the economy a wholly owned subsidiary of the environment?

We had a good laugh in our house this morning about John Howard’s “trust me on greenhouse target” act. Apparently he’s switched to vaudeville.

I love a sunburnt country, With dusty desert plains, Of dry and arid river beds, Because there is no rain. As long as there is coal to burn, And profits that I can see, My vision doesn’t see the need For renewable energy.

My letter wasn’t as witty as these, so it is unlikely to be printed, but I feel really good inside myself that I actually wrote and sent it:

I am shocked and horrified by Mr Howard’s referral to the “fuzzy warm idea” of renewables (SMH 23/4/07). I am the mother of 6 year old twin boys and very concerned about their futures. Mr Howard is advocating non-renewable energy which is, by its very nature, a finite resource. When current reserves run out, what then for my children? We are currently in an extremely prosperous position which most commentators believe is unlikely to last indefinitely given global economic and climate predictions. If we cannot afford to build renewables now, how will we possibly be able to afford to build them in 30 years time? If we build renewable energy now we can give our children hope for the future because they know that the sun and wind will never run out and wars won’t be fought over them.

I think Mr Howard’s thinking is very fuzzy if he believes we will vote to keep him in office now rather than our children alive in thirty years time.

For years I’ve observed people who are letterwriters but never really felt that it was the sort of thing I could or would do. When they started offering prizes in Good Weekend I was very tempted to try to write a letter then, but, as usual, never actually got around to it. Now I know why people do – when something matters as

much as our response to the threat of climate change does, you have to know deep inside yourself that you’ve done everything possible for your voice to be heard – if you don’t then you can’t turn around one day and say “how did this happen” or look your children in the eye when they ask you why you didn’t do something when you had the chance. After writing my letter I read Sharon Astyk powerful blog entry in Casaubon’s Book (24/4/07). She compared what happened in Nazi Germany to what is happening now and it made me want to resubmit my own letter:

“We tend to think of evil as psychopathic, recognizable, like a cartoon villain. Arendt pointed out that evil happens when ordinary people choose not to recognize the moral qualities of their actions.

It is a painful thing to recognize, as we must, that right now, Adolf Eichmann lives in our houses. He is us, and we are he. That is, the ordinary life that we are living right now is the cause of more harm than any Nazi ever committed. We are committing genocide all over the world by warming the planet. 1.5 billion people stand to lose their drinking water over the next century. Up to 2 billion risk famine. More than 2 billion will be displaced. We can expect 30 million to die of diseases that are gradually moving north. The people most at risk are mostly poor, many women, many non-white. Whole nations of people stand to be killed or turned into refugees. The Nazis managed to kill only 11 million people. We stand to make them look like pikers.

And we do it every day in our living rooms, in our cars, in our schools, at our jobs. Over the second half of the 20th century, there has been the gradual increase of the notion that beaurocrats, those who kill people with a pen and never have to dirty their hands are not less morally responsible, but more so. There is a special circle of hell for those who do not dirty their hands.

And for every one of us who deplores an Eichmann, ordering Jews to the gas chambers, or Clinton watching Iraqi children starve to death, or a Rumsfeld ordering torture, should look carefully at ourselves, and think about how we are different. We too are killing people. We are doing it every morning as we drink our coffee. We too are killing people when we get into our cars to go to work. We are killing people as we do our jobs. We wonder what we have done to deserve this government that we have. And the answer is this – we have the government we can expect. For those who wash their hands of the acts they are responsible for, there is a special circle of hell indeed.

What is the answer? The answer is to stop obeying the law, the custom, going on the way we are. Arendt pointed out that Eichmann missed the whole point of Kant – he thinks the law is good because it is the law. But the law (or the custom, or the way we live) is only good if it is good, and it is moral, and if each man and woman allows their conscience, their moral sensibility to do a true accounting and judge, and take real responsbility.

There is no excuse for us to fail to resist.”

As I’ve been writing Ian has been watching “Little Miss Sunshine” and I heard the grandfather in the movie say something that is coincidentally appropriate in response to our fight to stop carbon emissions rising:

When the writer Harold Pinter won the Nobel Prize in 2005 his Nobel Lecture: Art, Truth & Politics finished with the following challenge:

When we look into a mirror we think the image that confronts us is accurate. But move
a millimetre and the image changes. We are actually looking at a never-ending range of
reflections. But sometimes a writer has to smash the mirror â€“ for it is on the other side
of that mirror that the truth stares at us.
I believe that despite the enormous odds which exist, unflinching, unswerving, fierce
intellectual determination, as citizens, to define the real truth of our lives and our
societies is a crucial obligation which devolves upon us all. It is in fact mandatory.
If such a determination is not embodied in our political vision we have no hope of
restoring what is so nearly lost to us â€“ the dignity of man. 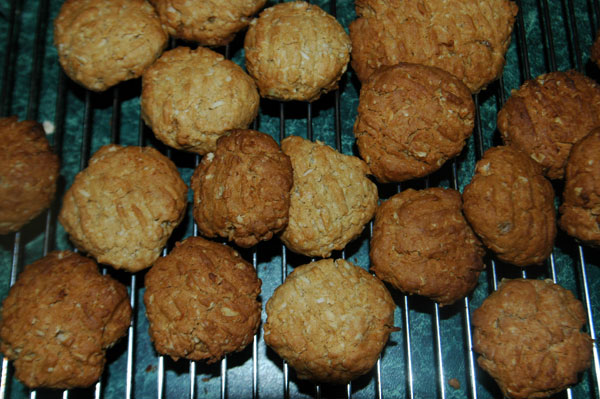 On a personal level today it was a freezing cold Anzac Day so I made Anzac biscuits with the boys – don’t like going to the March because I can’t bear to glorify war in any way, but we did think about the soldiers whose lives were so sadly taken from them and their families.

I’m not sure how making biscuits rates on the carbon scale? All the ingredients come in packages and have to be transported in order for me to make them in the first place, but perhaps if my next batch of ingredients comes bulk and unpackaged from the C0-op? Anyway, I’m sure they’re healthier and definitely tastier and the oven did help warm the house for a while. The boys love homemade biscuits. I also used more of my tomatoes and made my first ever batch of tomato sauce, recycling all the bottles I’ve been collecting and ending up with 7 and a bit bottles of sauce based on the Narromine CWA recipe given to me by Liz – absolutely delicious. Added them to my autumn harvest shelf. 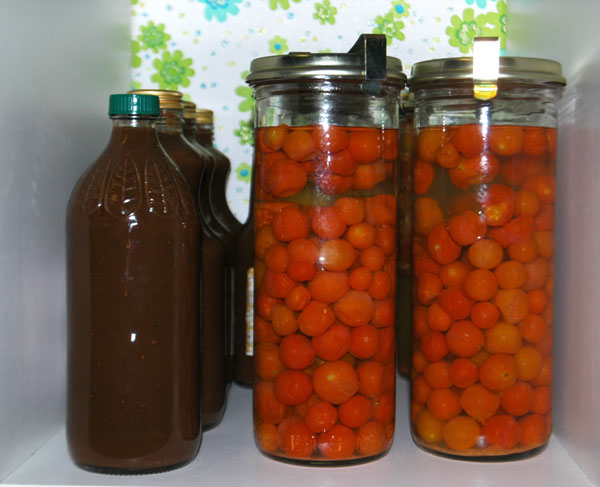 Boil together for 3 hours. Strain through a colander to take the skins out. Boil for 10 minutes and bottle while hot. Cork tightly and seal with wax. This never ferments (I actually blended it rather than pushing through a colander and put it in recycled screw top bottles sterilised with boiling water. Mine made about 4 litres)

Because it was so cold I made a point of putting thermal underwear and jumpers on the children and a huge jumper on myself so that we could turn the thermostat down 2 degrees – apparently this is a 6% reduction. Success. No-one complained all day. It helped that the house was full of yummy cooking smells.

I also picked our first 4 small heads of broccoli – delicious! 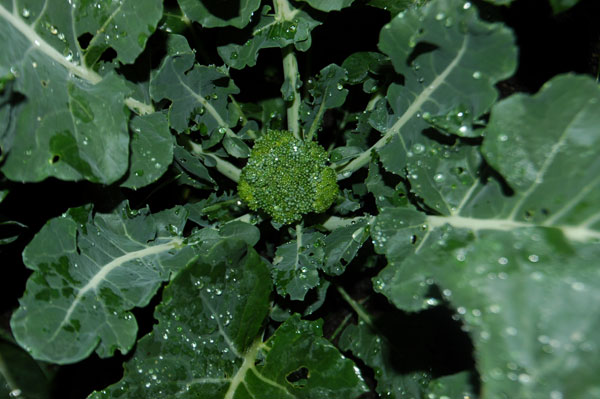