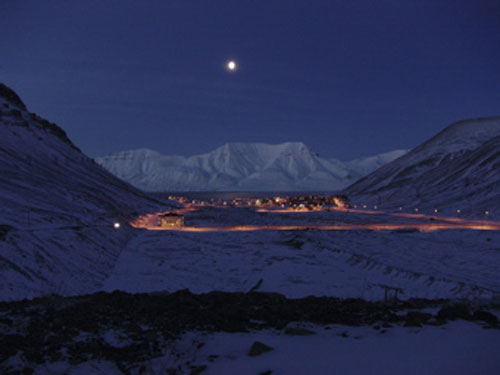 Today I stumbled across this amazing photograph taken by Maria Tefre for the Global Crop Diversity Trust. It’s of the Global Seed Vault being built into a mountainside cavern in Longyearbyen on Spitsbergen island around 1,000 km (600 miles) from the North Pole. Its goal is to store the world’s crop seeds in case of disaster. Starting with 200,000 samples when it opens in February, the vault will have the capacity for around 4.5 million bar-coded seed samples in all.

Well, in the event of disaster, I can’t imagine them giving ME any seeds so, when the sun came out and surprised us all with a hot dry day today, I made sure to do a round of the garden and collect as many seeds as I could find. I filled paper bags with mixed lettuce and salad green seeds, coriander seeds and dill seeds.

I then started thinking about my potatoes and saving some for next year! Last year I was told that it’s really good to store potatoes in sand over winter but, of course, as the weather gets cold and wet at the end of Autumn it’s hard to find dry sand. So today I took advantage of

the sunshine and spread sand into large flat containers to dry it out. I’ll store it in a couple of eskies until my potatoes are ready to harvest.

There were good reasons for making this The International Year of the Potato . Potatoes are a good source of food, particularly for the poor, but they’re also very susceptible to disease and damage with climate change … flooding in particular! and, as I can vouch with my garden, they’re very prone to attack by slugs and snails in wet weather.

This year I planted around 8 varieties of potato and I’m so glad I did – it’s been a real argument for biodiversity. Here are some of my healthy plants (purple congo on the left and New Zealand yam on the right) 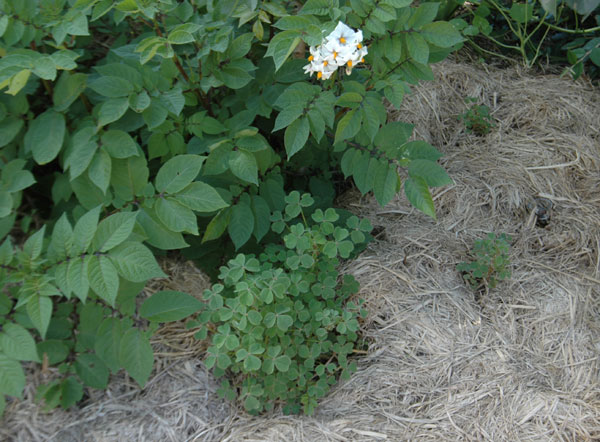 and here’s a bed where more than half were wiped out by slugs and snails! 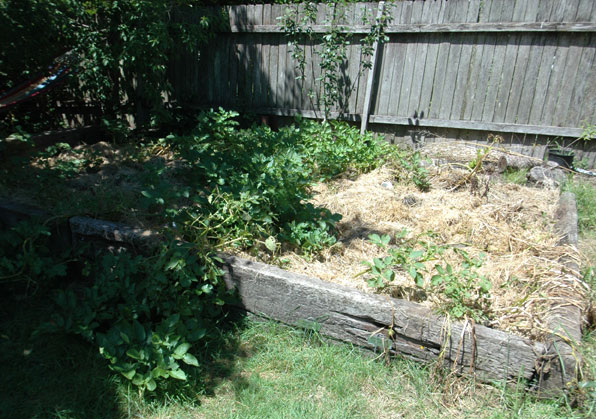 The potatoes that were the most vulnerable were the kipflers and the ones in the middle of this bed that seemed to have survived everything going on around them were the Green Harvest Red la Soda. If I’d only planted kipflers I’d have been very very miserable! My sweet potatoes are also growing well and only received minimal damage from a hailstorm. 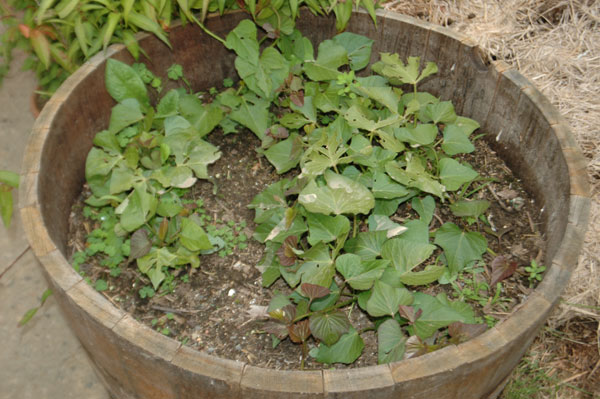 One of the main reasons I’m focussing on growing so many potatoes, apart from the fact that everyone in the family loves them, is that they’re one of the dirty dozen – the top 12 foods with the most pesticide content and therefore to be avoided, unless you buy organic or grow your own.

I was surprised that apples had the second highest pesticide count! …. and relieved that we’ve been able to scrounge apples from the trees in the vacant lot next door. Our dwarf Gala apple also produced its first four apples which we picked today … yum. 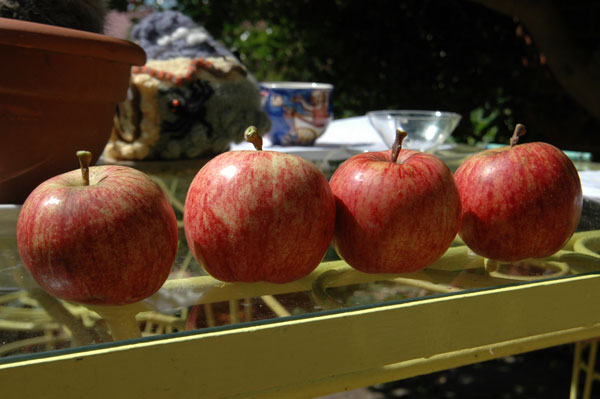 Also high on the list is celery at no. 4 …. I was stunned. Fortunately I tried growing celery from seed this year and have had a huge amount of success. 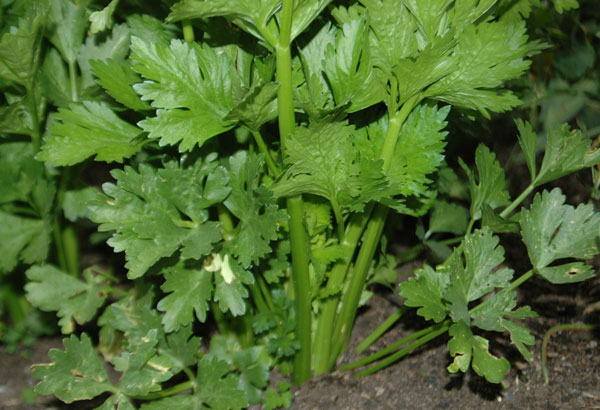 We’re harvesting it every day at the moment to make carrot, celery and apple juice and to add to salad. Speaking of salad, lettuce comes in at no. 8 in the dirty dozen and our all time favourites, strawberries, come in at no. 6. 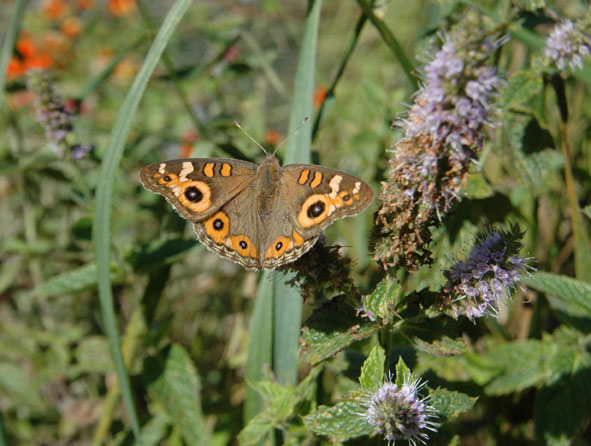 and a bee enjoying the red clover: 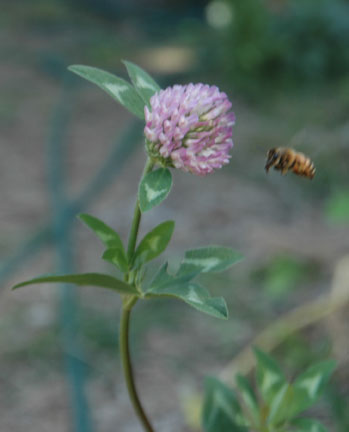 To reduce my energy consumption I stretched tablecloths that I’d washed straight onto the tables they’ll go on, and put them into the sun to dry – they dried so tightly on the tables that they don’t need ironing.

My political action was to finally turn my back on the world that has made me lust for one of those large stainless steel gas stoves…. the ones in all the gourmet magazines. We’ve been wondering how we’d go about switching to gas cooking because of its lower energy consumption and today the people next door threw out their old gas stove. It’s very, very, very unglam but it will work and will not require any new materials to be produced. We immediately picked it up and brought it home. Sigh. Sigh. Sigh.

9 thoughts on “The Year of the Potato & the Doomsday Vault”