Whenever I give a Slide Show presentation about Climate Change, as I did to staff and students at Nepean TAFE today, the slide that seems to appeal to people most is this one that I found on the Cool Hunter Site. It’s the ‘Canoe Dress’ by designer Yael Mer. Inspired by the New Orleans evacuation, this emergency inflatable skirt can double as a life-saving canoe in a flood prone area.

It’s the perfect antidote to the deeply disturbing news about climate change that makes up most of the presentation. It’s also the only way we can really cope with what’s ahead of us – lots of innovation, creativity and a good sense of humour.

The “Use Only What You Need Campaign” to help save water in Denver is another example of how creativity and humour can capture people’s imaginations and inspire them to act, while literally using less materials at the same time.

The drive to and from the TAFE was quite a challenge. I kept automatically speeding up but managed to correct myself and stay 20km below the speed limit most of the time … watching “Crude” tonight I was so glad I did.

When I got home I did a very easy political action by clicking on The Herald Sun’s poll about whether we are, or aren’t worried about climate change. I was surprised by how many people registered that they weren’t worried but, given that the poll was right underneath a photo of Andrew Bolt, one of Australia’s most vocal climate sceptics …

Bolt was interviewed on the ABC tonight supporting the screening of The Great Global Warming Swindle… a show that’s been debunked by scientists around the world. Fortunately a lot more people on the poll said they WERE WORRIED about climate change.

In response to the ABC deciding to screen the documentary, George Monbiot wrote a piece in The Sydney Morning Herald, Too much at stake to let climate-change sceptics bluff the world.

If you click here you can download a lecture which works through the actual footage and format of the “documentary” and explains what is fundamentally wrong with it. The lecture (with visuals) is about 40 mins long and is very clear and easy to watch

This has been a very controversial decision made by the ABC. To read what The Australian said, click here.

Rebuttals have come from David Miliband (UK’s Secretary of State for Environment) after the channel 4 screening in the UK, and from the University of Cambridge.

But back on the home front:

Today I finally found and bought safe drinking bottles for the boys. At one of the camping and adventure stores in Katoomba I discovered Stainless Steel drinking bottles. They’re not aluminium, and they’re not coated with plastic inside. (Check out my blog

on 23rd April – What did we do before Glad came along). I’m trying to avoid buying anything with plastic (a petrochemical that leaches bisphenol A) or with aluminium, because aluminium has been described in the industry as “a brick of electricity”… aluminium objects create huge carbon emissions because they require so much energy to produce them. The lids of these are plastic but they still seem to be the best option. 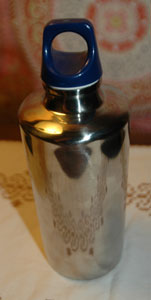 4 thoughts on “The Great Global Warming Swindle … not!”