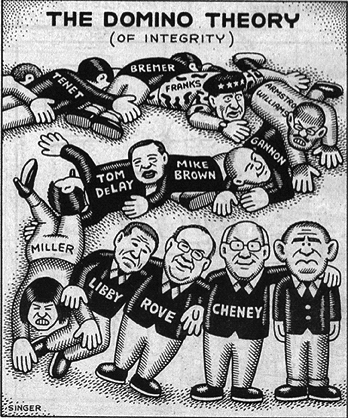 Great domino image from the boblog

One of the most common responses to discussions that arise about global warming is the one that has people saying, I’m only one person – what difference will it make if I do or don’t drive my car? … if I do or don’t buy more books? … if I do or don’t fly? There is also a strong feeling, which was argued vehemently by the young people I was with today, that most people, including themselves, aren’t willing to change. They seem to think that someone will wave a magic wand and suddenly everything will be all right and they can keep living the life they’ve always lived.

Firstly, there seems to be a lack of awareness that another life style might make them even happier than this one.

Secondly, things are getting worse not better, we’re running out of time and they’re the ones that are going to cop it.

Thirdly, there is no wand Dorothy.

The only thing that can save us is the superhuman effort of looking change in the eye and embracing it, and very quickly – something that, I was told today, no-one wants to do. Strange really that people believe this so deeply – I’ve been making changes every day now for around 30 days and it’s getting easier and easier, so much so that I can’t wait to come up with other things in my life that I can change. Once you deal with the psychological unwillingness to change, once your surival instinct kicks in and you become fierce with the desire for life to go on into the future, the actual act of changing is one of the most exhilerating things you can do.

I also believe that each individual is a domino in the grand sweep of the game. A few dominoes are currently standing but there are huge black holes in between them. The key to winning the game is to get as many dominoes standing as possible so that when the tipping point nears and the dominoes start to fall, there are enough close together to allow them to touch one another and start one large movement that will continue and reverberate around the whole planet. Perhaps Murdoch will be able to pull it off through his media. In the meantime I’m doing my darnedest to get as many dominoes as I can up and standing around me.

Even though I’ve started to catch the train on trips to Sydney I almost feel that today’s trip can be counted as a NEW personal action. The trains weren’t running so the trip to Sydney required a bus trip to Bankstown, a suburban train to Central and then another bus trip to Paddington. Everyone I knew told me not to do it – that it would be much easier and far quicker to drive. In a first for me I persevered, and while I ended up doing around 6 1/2 hours of public transport today I’m starting to feel quite Pollyana-ish about it. Glad to be able to experience the issues everyone talks about and glad to be able to make the trip and survive without too much difficulty. If anything, it was quite enjoyable.

Another minor action involved a purchase. Had I gone to lunch at a boutique pub prior to starting this blog, I would have tried an unusual bottle of beer (or two) with my lunch. Today I chose to have a Stella Artois on tap so that the need for another bottle to be made and recycled was eliminated.

The discussions over lunch about driving surprised and disappointed me. When I mentioned that I’m now driving 20km under the speed limit to try and reduce carbon emissions I was met with very angry responses:

Both the young women arguing this with me were REALLY ANGRY – I was so disappointed in their response because it indicated that they really hadn’t grasped the seriousness of what’s going on with climate change and that they were very convinced of some very wrong information.

There is nothing in the RTA traffic rules that talks about driving too slowly. There is only information about adhering to an upper speed limit.

With regard to lowering carbon emissions and safety I found two reports which I will now use to write letters to the State Government about reducing speed limits in NSW. I’ll also write one for local government.

The added benefit of course in reducing speed is that there is also a huge financial saving.

The company has produced a performance chart illustrating the effect of driving a cross-section of Transit models at governed speeds of 60 and 65mph. A road speed limiter (RSL) â€“ costing Â£25 – potentially can deliver useful savings in fuel consumption and carbon dioxide emissions.
On a Transit 260 or 280S 2.2-litre 85PS low-roof van, for example, driving 10mph below the motorway limit could save more than 19 per cent on fuel consumption at cruising speeds â€“ alongside a similar percentage cut in CO2 emissions.
By limiting speeds to 65mph, a saving of more than 10 per cent at cruising speeds is possible on the same model, again with a corresponding 10 per cent-plus reduction in CO2 emissions.

On a Transit Jumbo, a cruising speed saving of almost 13 per cent is achievable by governing top speed at 60mph compared with 70mph.
â€œMany operators have been asking us about achievable ways of limiting their impact on the environment as well as reducing costs,â€ says Fordâ€™s fleet operations director Kevin Griffin. â€œ…. we believe use of RSLs to be one of the most cost-effective approaches.â€

LETTING THE GENIE BACK IN THE BOTTLE:

In January 2006, Anable, Mitchell and Layberry, in a joint initiative of the Environmental Change Institute at Oxford, the UK Energy Research Centre, The Centre for Transport Policy at The Robert Gordon University and others, set themselves the challenge to limit speed to reduce carbon emissions.

They demonstrated that a lower, or even merely better enforced, top speed limit should not be ignored as it is one of the most certain, equitable, cost effective and potentially popular

routes to a lower carbon economy.

1. A properly enforced 70mph speed limit would cut carbon emissions from road transport by nearly 1 million
tonnes of carbon (MtC) per annum, or nearly 5 MtC over 5 years.
â€¢
2. A new 60mph limit would nearly double this reduction, reducing emissions by an average 1.88 MtC a
year, or approximately 9.4 MtC over 5 years.
â€¢
These savings, which are based on low projections of traffic growth, represent between 15% and 29% of
the total savings expected from the transport sector by 2010, as stated in the 2006 Climate Change
Programme Review (CCPR).

A better enforced 70mph limit on motorways would prevent over 300 deaths and serious injuries per annum on motorways alone. A 60mph limit would prevent over 600 deaths and serious injuries.
â€¢
Lower top speeds and the safety benefits would incentivise the market for lighter and less powerful cars,
thus increasing the carbon savings further.
â€¢
Initial indications of cost are that this would be one of the cheapest carbon abatement polices, across all
sectors, especially when ancillary benefits such as casualty and congestion reductions are considered.
â€¢
Of all measures to manage the demand for travel by car, speed limits are simultaneously the mildest,
most straightforward, the least intrusive and most egalitarian in their impacts.

The Commission found that a reduction of the speed limit on inter-urban roads to 55mph would achieve a further
reduction of 3%. Our figure is also consistent with a recent assessment of the potential of a 55mph motorway speed
limit to reduce oil demand in the case of a sudden disruption in supply. It is estimated that this measure would achieve
a 3.3% reduction in transport fuel use in European countries
Under the 70mph enforcement scenario, moderate restraint results in an additional 3% less carbon emissions from cars and taxis on these roads, and 7% under the 60mph scenario.
DEFRA 2006 Climate Change The UK Programme 2006 available at
http://www.defra.gov.uk/environment/climatechange/uk/ukccp/index.htm