Every day I angst about our car. We bought it new before I had any idea of how “they” had let the pollution of our world get away from us. Back in the days when I still honestly believed that “they” would always look after us. Now “I’m” stuck with a car that has higher CO2 emissions than I feel remotely comfortable with. Its value dropped as soon as we left the showroom and we can’t afford to trade it in on a Prius. So, every day I angst about our car.

Of course I’m doing the obvious like trying not to use it, using public transport etc, but when you live outside the capital cities there are far fewer public transport options. Like most people I’m waiting for a magic bullet. If a new electric car, or car that ran on air arrived, I’d buy it in a flash. In the meantime I don’t want to rush in to buy what’s currently on the market because I really want to be able to afford the “magic bullet” when it arrives. If only the government would drop the sales tax on the Prius and give rebates for buying them like they do overseas.

Basically I think everyone’s hanging on with bated breath for our governments to take action. We know everything’s going to get very expensive (food, electricity, water) so we have to be careful now of every cent we spend. We “nearly all” want non polluting cars, solar panels, water tanks … but we also know that they’re going to have to become cheaper and more accessible in the very near future or “bye bye baby”. So, in the meantime, every day I angst about my car.

A few weeks ago somebody said something to me which I couldn’t get out of my head – going vegetarian can reduce your greenhouse emissions more than buying a Prius!

I tucked that one away in the back of my head as something that I would look at “some day”. Well, as my angst over the car increased I realised that life isn’t a Judy Garland song and that I won’t wake up one day with the clouds far behind me unless I do something now. So today I bit the bullet (is biting the bullet actually the magic bullet?) and decided to commit to 4 vegetarian meals a week. I know this isn’t perfect but it’s realistic, given that there’s no way I can convince Ian to become vegetarian yet and I’m not ready to give up on his “turn to cook dinner.” Apparently the worst methane emissions come from cattle that are fed in feedlots so while we’re still eating some meat I’ll at least try and source organic pasture fed meat. I broached this with my local butcher here in Blackheath and turns out that he refuses to buy feedlot meat … yeah Bruce.

Apparently another benefit of vegetarianism is that it has a much smaller water footprint.

It’s not as though I’ve never tried it before. In 1978 (according to the inscription, not my memory) my mum gave me “Diet for a Small Planet”. Somehow between then and now, I (and much of the world with me) stopped reading the writing on the wall, even though it was spelt out very clearly. I’m older now, and need glasses, but I’m reading it loud and clear. So here goes: DAY ONE.

Today I spent all day doing my political actions (ie. interview with the local paper about the solar panel project and then launching this blog by email) so I had very little time to think about dinner. Nevertheless this was our first meal using what we had at home: 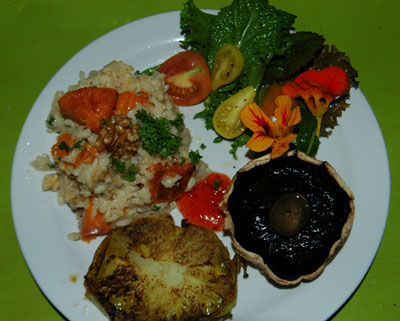 I’m going to search out the most delectable vegetarian ideas I can find to lure Ian down the garden path with me. If anyone out there has great recipes they’d like to share please send them this way. 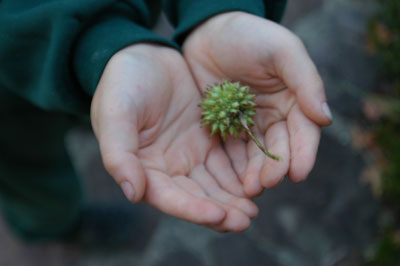 While Oscar and I were out walking we were fascinated by all the drunken cockatoos having a party in the plane tree. They were stuffing their faces with the seedpods and Oscar immediately wanted to eat one. It was something that had never remotely occurred to me before … 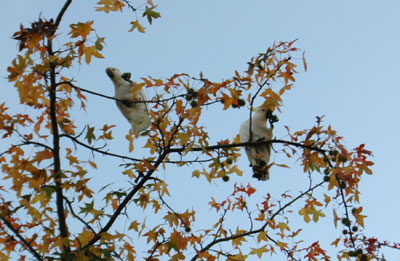 I didn’t dare let Oscar try one so we came inside and made gingerbread men and soccer feet instead. This is a really great recipe that I got from Antonia:

Combine dry ingredients. Cream butter & sugar until light. Add egg, molasses & lemon juice, beating well. Add dry ingredients to make firm dough. Roll onto lightly floured surface and cut with gingerbread man or other cookie cutter. Bake 10-12 mins at 180C. Allow to cool on wire rack. Decorate with lollies stuck on with icing. Make this by beating one egg white until frothy then gradually adding icing sugar (1-2 cups) until it slips slowly from a spoon when held up.) 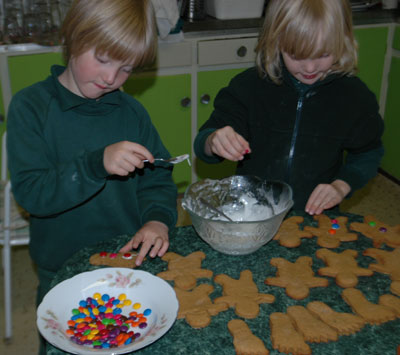 As a mother of small children it is sooooooo hard juggling everything so that you can make conscious responsible decisions at all times, but the payback is soooo worth it – I’ve never felt so alive, so connected to my boys and “he who must obey”, so happy and so fulfilled. It is strangely like the phenomenon that seems

to happen to people who get cancer – some people just give up on life; others get stuck into meditation, exercise, healthy eating, changing their thinking … this may, or may not “conquer” the cancer (and lets face it, no matter what happens with cancer or climate change, each of us will be extinct one day and that’s the crux of what we have to learn to live with) … but getting back to my thought before I so rudely interrupted myself …. when people choose to “act” rather than give up, they nearly all turn around at some point and say that the cancer (or whatever) was the best thing that ever happened to them because they actually “woke up” and started living. Since I started “A Year In A Day” I’ve become so involved in “choosing” how I live, rather than being swept along by how other people want me to live, that my despair over climate change now has an equally powerful companion who is a lot noisier and chattier – MRS JOY AT BEING ALIVE NOW!

“The price of freedom is eternal vigilance” – Thomas Jefferson

5 thoughts on “Some day over the rainbow…”