Well, today I discovered that just buying a bike is no preparation for peak oil! After clearing out my front room yesterday I put my bike in an easy to access place and finally, after owning it for 5 months, went for my first ride in Blackheath. I told Ian he was a wimp for driving, not riding, as I put on Maxie’s helmet and launched off to my permaculture class on the other side of Blackheath. I was feeling as cocky as Kevin Rudd. Well! I had no idea how many hills there were between here and Wombat St and by the time I got there my legs were jelly and I felt like I was about to have a coronary. I couldn’t believe it – it’s taken me the whole day to recover. Now

I realise that preparing for peak oil, global warming etc is not as easy as consuming less, buying solar panels or planting food to eat. It’s also going to require building up a huge amount of fitness – eeeeeek. Oddly enough this has not been something I’d considered before and it has been a huge shock to me. I’d had a vague notion that I was fairly fit but today showed me that I’d be stuffed without a car or train to get me around.

Riding made me think even more about how environmentally friendly a bike is – not just for the obvious reason of not using fuel, but also because speeding cars kill so much wildlife. Slowing down in all aspects of our existence, including working less, really is the answer for preserving life.

Scouring the web for more information on one of my favourite photographers, John Reid (photo above), I discovered a fantastic source for Australian Blogs – The Australian Index – Exploring Australian Blogs . I’ve just added the most amazing recipe site that I found there to my blogroll – Cook (almost) Anything and discovered that it’s 40 years ago today that Sgt Pepper taught the band to play!

I also came by chance upon this photograph of Al Gore in his office on Vincenze’s Pit . It was followed by a discussion of how people will read what they want to read into the picture. 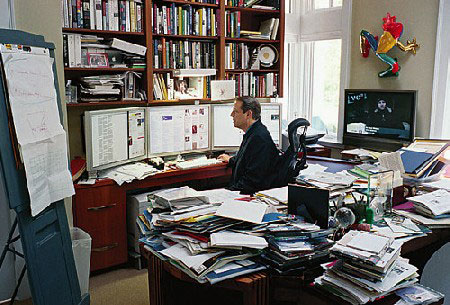 I immediately thought, “yeah, he’s as messy as I am!”. The next thing I noticed was that the artwork on his wall is a sculpture of a frog … a species that’s already 75% extinct. I reckon his awareness of the alarming rate of species extinction would be a very valid explanation for why Al Gore pushes himself as hard as he does. 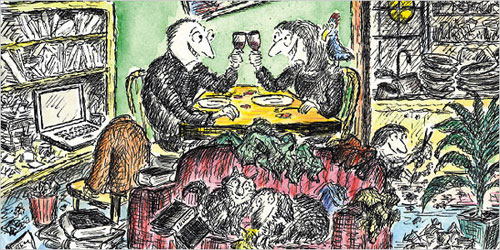 Cartoon by Edward Koren in the NY Times

“… contrarian voices can be heard in the wilderness. An anti-anticlutter movement is afoot, one that says yes to mess and urges you to embrace your disorder. Studies are piling up that show that messy desks are the vivid signatures of people with creative, limber minds (who reap higher salaries than those with neat â€œoffice landscapesâ€) and that messy closet owners are probably better parents and nicer and cooler than their tidier counterparts. Itâ€™s a movement that confirms what you have known, deep down, all along: really neat people are not avatars of the good life; they are humorless and inflexible prigs, and have way too much time on their hands.”

I’m not quite sure about “humorless and inflexible prigs” but it is a relief not to feel so bad about having a desk like Al Gore’s.

For my political action today I wrote a few letters for news sites on the web. One that did get printed was the one in response to this On Line Opinion article: Coal mining will outlast Green Hysterics