How can we look our children in the eyes and not feel ashamed when Australia’s carbon emissions per capita are this high! The main excuse the government uses for not signing Kyoto is that we are meeting our targets anyway (both our local MP and the Prime Minister’s office told me this when I rang) but in new information released by The Climate Institute today it looks as though Australia is not reaching its Kyoto targets after all ….

Australiaâ€™s energy consumption emissions have increased by 22.5 million tonnes. This is the equivalent of adding more than five million cars to Australiaâ€™s roads, or nearly 50% of the national car fleet. Â· Greenhouse pollution increases in 2005-2006 and 2006-2007 are above Australian Government projections over the same period indicating current government policies are not having the desired impact. Â· Even with Government projected trends, total emissions in 2010 will be more than 110% of 1990 emissions and it is looking increasing unlikely that Australia will meet its goal of meeting its Kyoto target of 108% of 1990 emissions.

that’s why I’m doing this blog – without targets you simply don’t do it! … and without pressure from us “they” simply won’t do it either. Trying to stop the rising anger in the community is leading government to strike back as evidenced in a Sydney Morning Herald article today: “Greenies told to can the spam” , which reveals that Morris Iemma’s office is trying to get lobbying emails classified as spam.

But leaving aside the political and getting back to the personal:

My biggest indulgence has always been books and magazines – I love them. I could have bought a house with the money I’ve spent on them in my lifetime so far. The bad news is that because of its consumption of energy, the paper industry emits the fourth-highest level of carbon dioxide among manufacturers, according to a 2002 study by the American Energy Information Administration. According to Time magazine the industry follows the chemical, petroleum and coal products, and primary metals industries.

The paper problem
From the first step of cutting down trees in forests to the burning or recycling of old books, the most harmful part of the process is paper production. A huge amount of energy, usually from coal-fired power plants, is consumed to break down wood fibre to make paper.

All virgin paper causes loss of forests and forest soils which are our largest â€˜carbon sinksâ€™-absorbers of carbon from the atmosphere. Clearcut logging is the worst culprit for destruction of topsoil-destruction that releases stored carbon that would not otherwise have been released-and the reason it is important to only use wood from Forest Stewardship Council (FSC)-certified forestry.

I still don’t think I’ve fully recovered from the shock of this news and it’s forced me into a major rethink of how I get the information I need. Fortunately, becoming a blogaholic has distracted me from the pain, but I still have to be physically torn away from bookshops and newsagents , weeping and gnashing my teeth at the unfairness of it all. I guess, though, the Inuit and the Bangladeshis and

the Darfurians have more to complain about when it comes to the unfairness of it all … especially if they were able to see my house groaning under the weight of all the trees that have been amputated from this feverish world to make books that haven’t been read, or magazines that are flicked through and then discarded. How unfair is it exactly when almost every bit of information I could possibly need is available on the Web or in the library and I can even take my laptop to bed with me. I’m part of a culture that has taught me to abhor the word “should” – freedom of choice is paramount and its important to avoid “limiting” behaviour. Tell that to a mother whose children are dying because the Western World “chose” not to help.

After a trip to the newsagent where I picked up and fondled every Organic Gardening, Grassroots, Renew and yes, Vanity Fair, I decided the only “choice” I had was to go to our local library.
This led to “marital eco-fight” number one (and I won’t even begin to bore you with 2, 3 & 4). Ian was thrilled to go on an outing with me but was in the car before I could say “have you got any chocolate?” I diplomatically responded with “What the …. are you doing in the car! It’s only 2 blocks away! The world’s doomed if everyone acts like you do.” Big mistake. It was cold, raining and, even though he got out of the car and then walked to the library with me, he was VERY GRUMPY. 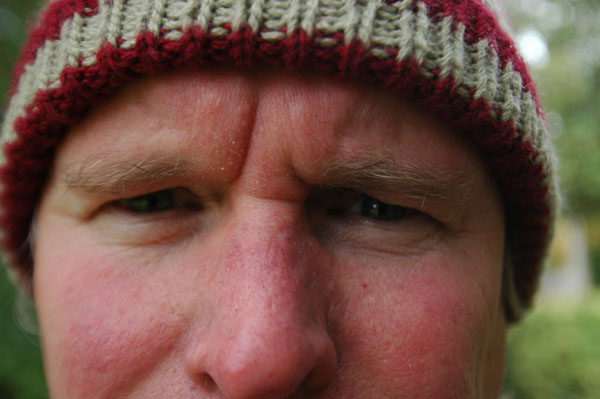 No-one likes their liberties being taken from them. As you all know, it’s better to “let him think it was his idea.”

Anyway, I had enough self awareness to realise I’d stuffed up big time and I put on my cutest smile saying “start again, start again.” I then succeeded in embarrassing him by cornering the librarian and giving her a list of all the alternative energy and gardening magazines that I’d really love to read and that are tempting me most at the newsagent. Fairly presumptious since she’d started at the library 3 months ago and it was the first time I’d come in! To her credit (she was wonderful) she quickly tried to add all the magazines onto the order she sent in yesterday. She’s won me … the library is about to become my home away from home. The added bonus was that we came home with a pile of videos that the boys were thrilled with and that didn’t cost us a cent.

I’m also on the lookout now for anyone who’s finished with magazines or good gardening books so that I can build up a good section for her in the library. I’ll cull them so that her tiny space isn’t inundated and will sell the rest at the local community recycling market.

Now time to put my feet up with the laptop, drink a homebrew and read the paper! Not so unfair after all.

Later I headed down to Sydney to the “10 Years to Change” Labor Environment Action Network meeting at the Labor Party’s Annual Conference. I was impressed that they allowed non-party members to attend and met a lot of Australian Conservation Foundation and Friends of the Earth staff there – all lobbying against nuclear and for renewable energy. As Don Henry from the ACF said in his speech, he didn’t want to offend anyone but he’d be even more pleased if he could be giving his talk to a Liberal Environment Action Network meeting.

Spoke to David Worth from the Western Australian Sustainable Transport Coalition about biketracks.