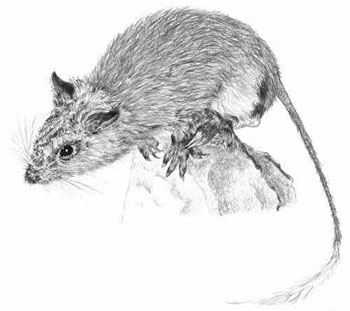 Rats! I got really excited when I heard the Budget announcement of the $12,000 rebate for solar panels in schools and community buildings. After hours of research, however, I’ve found out that it’s still not going to be easy to get the panels. Firstly, we’ll have to find $24,000 upfront in order to get the $12,000 rebate. This would probably be enough to cause most schools to give up, as they’re usually struggling to get enough money as it is. Raising even $12,000 requires a lot of cake stalls!

Fortunately we’ve started the fundraising initiative with Green Alliance to get $5 for every person we sign up to install free energy efficient lightbulbs and showerheads. Volunteers have been at the school today for Education Day and we’ll be in shopping centres this Saturday. I’ve also started approaching the Chamber of Commerce and Service Clubs for donations. Knowing what a fabulous community Blackheath is I’m sure we’ll raise the money in a flash but it takes mega-commitment to pull something like this off. The announcement really is a drop in the bucket in terms of action on Climate Change – fine, perhaps, in theory ….

Even just finding The Guidelines for the rebates is a skill in itself.

When you finally get through the Greenhouse Office maze and read the Guidelines, you then have to go to the New South Wales – Department of Energy, Utilties and Sustainability (DEUS) and speak to Paul Maddocks … if you can get through (I haven’t been able to yet) on 8281 7701

I’ve summarised the most important parts of the Guidelines at the end of this blog, but getting back to how I opened today’s blog …

My personal action for today was to tackle our rodent situation. Despite the fact that I illustrated Wild Neighbours and honestly would love to deal humanely with the many little mice and rats that move in on occasion, I’ve also read The Plague by Camus and hate the fact that rats are vectors for disease and cause huge amounts of damage … like chewing through our wiring! (Interestingly Camus’ allegory of the rise of Fascism has a disturbingly contemporary feel to it!)

But getting back to our rodent situation. A couple of months ago, attempting to be humane, we tried a new trap I found – the Elite Pet Wind Up Multiple Catch Mouse Trap. 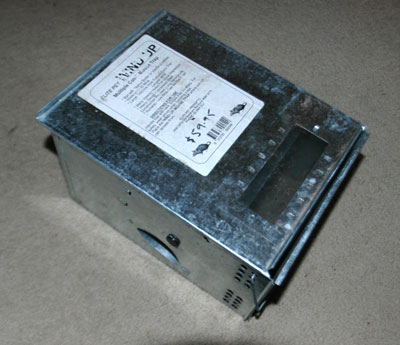 This works brilliantly. You use vanilla essence or peanut butter as bait and it can, apparently, hold up to 30 mice. When we caught the first ones (very quickly) the boys wanted to keep them as pets. Within a few hours of putting them in a cage we had 7 new babies as well … GREAT!

The only problem with this trap is that it’s very expensive if you need traps in more than one place, and you also need to constantly go and find somewhere to empty it… as far away as possible. It’s a good trap, though, that lets you check if you’ve caught a native mouse or rat as opposed to the more troublesome introduced species. Because we spent so long trying to be humane (but could only afford one of the traps) the “rodents” went forth and multiplied at an alarming rate. At the point where they reached plague proportions and started to do my head in (and my pantry, and my wiring, and my books, and …. oh I just can’t bear to think of the consequences of being humane … ) I just stormed down to the hardware shop, stocked up on ratsac and began my offensive.

Now that the numbers have dropped substantially, and my nightmares have stopped, it’s easier to think kindly of rats and mice again (after all, they’re all dead now). But of course, there’s plenty more where they came from and now that the numbers are manageable again, I’ve made a pact today to really try to tackle this differently. Our house is very old and it’s impossible to block all holes to prevent mice and rats coming in. Fortunately bush rats very rarely come inside … theyr’e more interested in the garden. My goal now is to stop using ratsac – not because I want the mice and rats to live (I don’t want them living inside my house) but because mice and rats that have been poisoned move more slowly and are likely to be eaten by predators (eg birds) which will then also die. I’m intensely conscious of this so know I have to do something. I also don’t want to be responsible for more poisons being made and distributed.

So today we bought half a dozen old fashioned mouse traps and I’m placing them in every nook and cranny …. I’ll probably buy another dozen or so in case, as Al Gore says, global warming will continue to increase the numbers of rats and mice in the future.

My guilt over killing mice made me keen to have another vegetarian meal tonight and, fortunately, even Ian is getting the hang of it. He made us a delicious fresh pasta dinner which I dubbed:

Boil pasta and just before serving add parsley, rocket and marinated chevre(goat’s cheese) to the sauce.

Season, toss through pasta and serve with a spoonful of chilli jam. 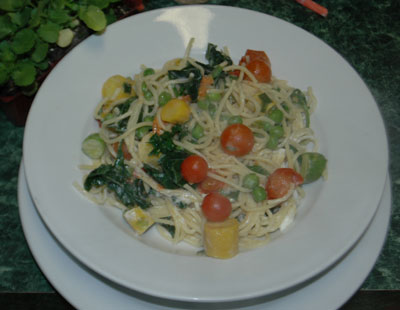 Listening to the Simpson’s after dinner it felt very close to home when Homer said to Lisa, after she mucked up his barbecue because of her vegetarianism:

I used to believe in things too…

thank goodness for Crikey.com who’ve reminded us about the Government’s backflip on solar:

THE Federal Government has slashed solar electricity rebates to community organisations and schools and will phase out financial incentives for residential and commercial solar power installations by the middle of next year.

generate electricity, quietly halved the maximum rebate to community organisations on January 1, from $8000 to $4000. Rebates available to private home owners will be gradually reduced until the program is closed in 2007.

Mr Speaker, one of the great challenges we have is to maintain the beautiful, diverse and precious natural environment we have in Australia.

Our responsibility is to manage the environment for future generations. One of the serious long term threats is global warming…

We want to encourage homeowners to install solar panels across Australia. The current rebates will be doubled so that households will receive up to $8,000 for installing an average system, which costs around $14,000, a rebate of over 50 per cent. Grants of up to $12,000 will be available for solar panels in schools and community buildings.

Check out www.crikey.com.au for independent, questioning and quirky news and commentary.

From the Solar Panel Rebate Guidelines:

The new competitive grants element of the programme will enable schools and community groups to apply for a grant of up to 50 per cent of the cost of a solar power system, with an upper limit of 2 kilowatts.
The level of demand will determine if the programme closes before June 2007. Demand will be managed by progressively reducing the rebate level by small amounts over time. It is expected that 10 cent steps will reduce the rebate level for households from $4.00 to $3.50 per peak watt (ppw), capped at $3,500 (1 kW), in 2007.

The Australian Government retains the flexibility to adjust the size of the steps and their duration in response to demand on the programme funds.

Applicants should not assume that they will receive a rebate on submitting an application.

PVRP applications for schools and community buildings are subject to an assessment of the educational and interpretative merits of the proposal.

Applications will need to specify, in detail, how these criteria will be satisfied. Assessment of educational merit will be based on the education, extension, promotion, interpretation and demonstration activities to be undertaken by the applicant. A scoring system is used to assess applications and determine eligibility for the rebate.

The Australian Government encourages potential applicants under the PVRP to enter into a partnership arrangement with an electricity authority or other organisation to provide PV systems and to develop education or extension proposals. Advantages of partnership arrangements could include benefits arising out of combined actions, access to technical advice and financial benefits.

In addition to the PV system installation, full details of education, extension, promotion, interpretation and demonstration activities must be provided. For example, this could take the form of a media launch of the newly installed solar system, on-site interpretation, newsletter or newspaper articles, web site information, presentations, a solar energy course integrated into school curriculum, use of solar kits to demonstrate the technology, use of special instrumentation or educational computer software to monitor energy generated, use of videos, publications, displays etc as appropriate to the organisation. In schools, integration of PV educational activities into the curriculum will be mandatory.

Assessment will be based on allocated scores according to the following groupings:

1) Public relations and awareness
2) Communications and partnerships
3) Education and interpretive merit
4) Other (innovation).

One of the expectations is that the school will form partnerships with electrity suppliers or other groups within the community (such as local council supporting a local school) to promote ideas, functions and activities. This may include the establishment of an environmental partnership agreement between the parties.

I explained to the man at the Greenhouse Office how dreadful it was that schools still have unflued gas heating, which is illegal everywhere else in the world (as far as I know). A Public Health Physician in the Health Department told me last year that the biggest public health risk if Bird Flu came to Australia was the unflued gas heating in our schools. I told him how we’d been demanding the Education Department do something about this and, unfortunately, what they’ve chosen to do is to replace all the unflued gas in our school with old electrical heaters. This will be much healthier for our children in the short term but will dramatically increase our greenhouse gas emissions, and thereby be worse for them in the long term. I won’t even start here on the air conditioners that have been given to schools in the last year, and the fact that our school has absolutely no insulation ….

I explained to him how we really needed solar panels to counteract the Greenhouse Gas emissions that our electrical heating will produce. He suggested I keep an eye on the State Government to see whether they’d re-introduce funding assistance that we could combine with the Federal Rebate.