How can I suck thee in? Let me count the ways.This ad went to air in America during May last year. It was put together by the CEI (Competitive Enterprise

Institute) – the same Exxon Mobil funded think tank that put out the press releases about Al Gore’s electricity bill. These appeared in papers around the world the day after An Inconvenient Truth won the Oscar.
Hand up if you were sucked in.Of course they didn’t mention that Republican zoning changes didn’t allow Al Gore to put up the solar panels he’d applied for. To really understand how the Competitive Enterprise Institute operates it’s worth reading an article in this year’s Green Issue of Vanity Fair called A Convenient Untruth

I read it on the train yesterday when I went down to see our Federal MP Kerry Bartlett to express my concerns about governmental inaction on Climate Change. I made it very clear that a lot of people want a lot more action than we’re getting – a 25% renewable energy target & a 30% decrease in emissions by 2020, & the signing of the Kyoto Protocol so that the world can work together on this. It’s easy to talk about setting up alternatives but it took 6-7 years to get all the countries of the world to work together on the Kyoto Protocol. It has consecutive commitment periods which allows it to be developed over time and, unless Australia ratifies it now, our country can’t be involved in negotiations for the second commitment period. We don’t have time to waste another 6-7 years setting up another legally binding framework. Everyone has been making mistakes on this … that’s why we can’t afford to wait to act – there’s no leeway for more mistakes.

I also took the opportunity to ask for Federal Government support for the bike/multi-purpose rail trail that we’ve been working on. So many people just think of the “bike trail” as a recreational facility. There seems little recognition that Australia’s transport emissions are currently 30% over target. This is very serious. A bike trail would encourage more people to use bikes recreationally but it would also mean, for example, that thousands of school children could safely ride their bikes to school (impossible to do so on our highways), people could travel to work locally and if power to trains failed at any point, people could still get around safely.

On the way home I stopped in at Katoomba to buy the new Naturale 100% recycled tissues I’d heard about. I don’t use tissues myself anymore but Ian and the boys do – Maxie, in particular, uses a lot when he’s sick. Unfortunately Coles didn’t have any so I spoke to the Manager and he said he’d see if he could get them in. If you’ve seen them anywhere please let me know. As far as I can tell they’re the only recycled tissues on the market. Many of the others only have boxes made of recycled cardboard.

In the evening I attended the Local Council Meeting and stood up to protest against the recommendation in their Open Burning Policy to loosen restrictions on burning (thankfully just in the short term I hope). It’s simply not enough just to do what the EPA approves (Environmental Protection Authority) because if you look at their policy they don’t even look at the CO2 emissions of burning – all they’re interested in is the air quality, not the greenhouse gas emissions and its impact on global warming. 25-30% of carbon emissions are caused by fires.

I didn’t succeed in getting them to change this but I do think a number of people listened to the comments I made, including the news that a petition was going to the meeting of the World Heritage Committe in New Zealand this week to put our National Park on the World Heritage in Danger list. Fire has a big part to play in this, as does the movement of the world’s plants and animals. As it is getting warmer plants and animals in Australia are moving towards the south pole or upward. Where, however, do the plants at the top of the mountain go?

But back to the personal. 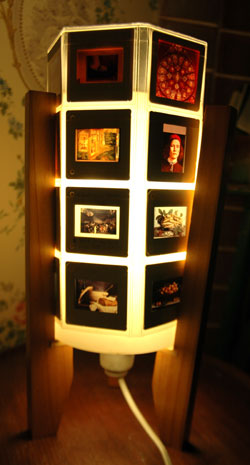 I work late and the day before yesterday I needed to think of something to stop my bedside light shining in Ian’s face while he’s sleeping. I made this fabulous lampshade with my old slide sleeves and slides left over from my teaching days. The boys loved it and I was able to give them a mini art lesson. I can also change the slides easily if I decide I’d like new images.

For my political action I sent off another email about the Anvil Hill coalmine through the Citizens’ Climate Change Campaign.

Today, because I chained myself to my desk for most of the day, I didn’t get much time to think or act on reducing our emissions. We decided it was time for a break so cut our emissions by switching everything off and heading to the local pub for dinner. We rugged up, braved the snow, walked and, as it turned out, stumbled into a friend’s birthday party. I immediately got into someone’s ear and told them about our blog. Meagre as it is, that will have to be my action for today – both personal and political.

While we freeze and it snows outside (but we can warm up in cosy homes) around 44 people seemed to have died in heatwaves across Southern Europe (temps up to 45ÂºC), 250,000 Pakistanis have been left homeless by a cyclone, Britain is flooding, and 200 homes have been destroyed as California goes up in smoke.

Are we there yet?

4 thoughts on “Question everything”