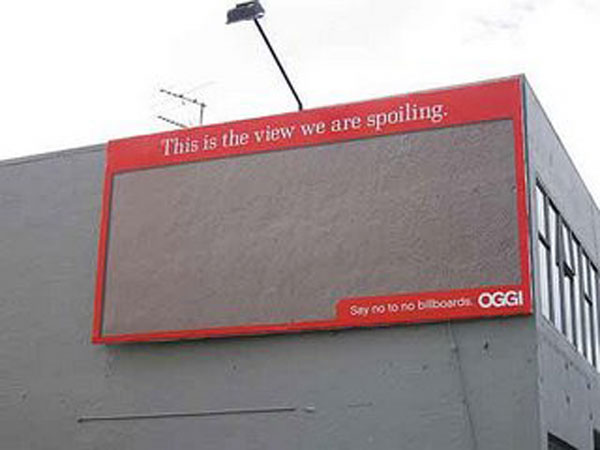 Yesterday I wrote about the ban on outdoor advertising in Sao Paulo. Most people are so stunned by this they’re convinced it’s a hoax. The backlash against outdoor advertising that’s happening worldwide is being matched by a backlash from the billboard industry itself. While it’s true that in some cases billboards can be more appealing than the area they may be covering, the reason for banning billboards is obviously much deeper and more complex than the ad above would have you believe.

Billboards are not just about visual pollution! They are usually about promoting unnecessary consumerism in an age where our consumerism is a leading contributor to global warming. Even forgetting their content, billboards are made of giant sheets of almost
indestructible vinyl. When these sheets are taken down they go into landfill and make huge tracts of land unusable, not to mention the environmental damage of producing all that vinyl in first place. They are also usually lit and, with many now being video billboards, their massive consumption of power is yet another way they add to the world’s unnecessary carbon emissions. Some of the new billboards also produce sound, and it is this noise pollution that is perhaps causing some of the biggest public reactions. 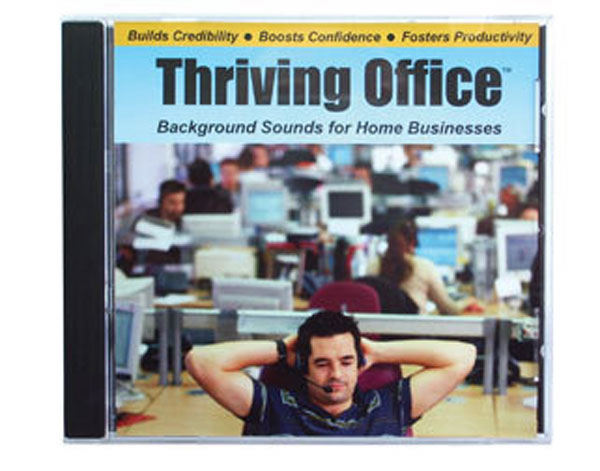 There’s nothing worse, when you’re trying to take a serious business call at home, to have your child call out, at the top of

their lungs, “I did a poooooooohhhhhhh!” It’s hard for some people to take you seriously if they hear things like this and realise that you’re working from home. Rightly or wrongly, perhaps, some people make the judgement that you aren’t fully focussed on the job.

As telecommuting becomes more of a priority in response to peak oil and global warming, more people will be facing the issue of their “home office” not carrying the same legitimacy as working from a business premise. This Thriving Office CD is the solution!

“It replicates the sounds of a bustling work place in a cunning attempt to trick your judgmental clients into thinking your company is more than you and your cat. The disk has two 39-minute tracks, â€œBusyâ€ and â€œVery Busy,â€ so you can obfuscate as much as your career requires.”

… and know that you’re saving the environment and keeping money in your wallet at the same time …. not to mention the opportunity to have a nap when you need one! You can read more about this CD here.

But on a far more serious note for anyone still in doubt as to the seriousness or speed of global warming, check out Leonardo DiCaprio’s The 11th Hour

and more particularly these satellite images from the Real Climate site which show just how much the Arctic has retreated in only 28 years: 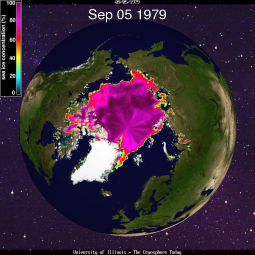 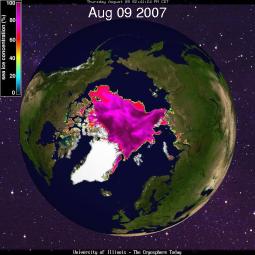 A few people have already remarked on some pretty surprising numbers in Arctic sea ice extent this year (the New York Times has also noticed). The minimum extent is usually in early to mid September, but this year, conditions by Aug 9 had already beaten all previous record minima. Given that there is at least a few more weeks of melting to go, it looks like the record set in 2005 will be unequivocally surpassed. It could be interesting to follow especially in light of model predictions discussed previously.

There are a number of places to go to get Arctic sea ice information. Cryosphere Today has good anomaly plots. The Naval Sea ice center has a few different algorithms (different ways of processing the data) that give some sense of the observational uncertainty, and the National Snow and Ice Data Center give monthly updates. All of them show pretty much the same thing.

My new personal action today has been quite an easy one. Usually at night I blog until quite late and listen to the TV or music at the same time – this means I’m using two electrical appliances…. not to mention giving poor Ian a hard time. Tonight I’ve plugged headphones into my computer so that I can do both from the one machine. In between writing I’m also listening to Lateline and the discussion of our Government’s apalling decision to sell uranium to India. And it just so happens that my laptop is unplugged because its battery is full so I’m currently not using electricity at all.

After all that it’s probably a good idea to listen to some music!

Today I discovered NASA – which stands for North America South America – one of its originators, Squeak E. Clean, is the filmmaker Spike Jonzes’s brother, and if you’d like to listen to a really good megamix on their Myspace site click here

Finally. After 4 1/2 years in the making, NASA has begun countdown to liftoff. NASA is an international collective of musicians spanning the genre spectrum. At the apex, Squeak E. Clean and Dj Zegon. We met in April of 2003 at a friends studio, and began to make music together the next day. We spent all of our time sampling rare Brazilian records from the 60’s and 70’s to make tracks, and soon we began to develop the concept for NASA. We appreciated how we had become such good friends through our passion for music, and decided to make a record with all of our heroes and favorite musicians with this as a model. People from different worlds coming together through shared inspiration and love of music. That’s why all the crazy collaborations like Ol’ Dirty Bastard with Karen O, and Fatlip, David Byrne with Chali 2na and Gift of Gab, or Tom Waits and Kool Keith. We realized that people come together through music and that is a beautiful thing, and we should expand on that concept and make a whole record celebrating it. The idea is to ignore all of the boundaries and boarders that are in place to keep people divided, such as musical genre, race, politics, geography, language, etc. We’ve assembled the craziest and most eclectic collection of musicians ever assembled on one album in the hope that we can show, through music, that all those superficial divisions are an illusion, and that we are all one race of human beings interested in collaboration and unity, ignoring preconceptions, and transcending genre definitions. Through the making of the record, we’ve documented all the sessions on video, and a documentary of the long process is being cut together now. There’s some crazy shit on there.. down @ Sizzla’s compound in Kingston, Jamaica with Amanda Blank.. George Clinton’s consciousness altered recording session, Method Man doing magic tricks. It’s ill, and should be done by in a few months. We’ve also been working with Syd Garon, animator and director of one of our favorite movies ever DJ Qbert’s “Wave Twisters” and a handful of well known artists to do the NASA movie. Similar to the concept of the record, Syd is working with different artists, combining their artwork through his animation to make an artistic cornucopia of sights and sounds. Check it out>> The record is almost done, so look out for it soon @ your neighborhood blog>> Peace!

By the way, Spike Jonze made a couple of great films interviewing Al Gore before he lost the election.

My political act was to lobby for funding for more web based training in telecommuting and communication.

7 thoughts on “Our finest hour?”