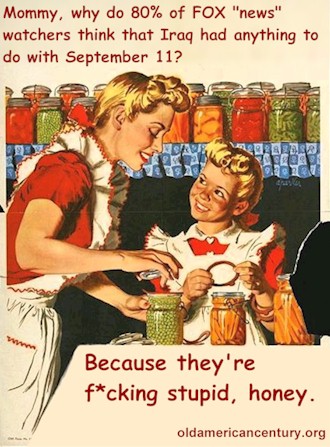 Well, what a week we’ve had!

â€¢ Our Premier described anyone protesting against APEC as a feral …. gracious … Australia must have the highest population of ferals in the world!

â€¢ Our Treasurer Peter Costello has introduced a Bill to gag public debate, allowing the Australian Competition and Consumer Commission to be given the power to sue anyone out of the water if they boycott a product:

Hurt a business simply by arguing that it’s ethically repugnant to buy its products and the commission will be able to step in and sue to recover the company’s lost profits. It’s quite a service.

No free-speech defence is immediately available. You won’t be able to go to court to plead the pros and cons of open-range chooks or gentler methods than mulesing to save sheep from fly strike.

The new law will catch lone campaigners, community groups, NGOs, lobby groups and even the media – anyone whose campaign for what the law calls a “secondary boycott” actually hits the mark and causes financial pain. (David Marr, SMH)

â€¢ and to top it all off, one of my favourite Sydney Morning Herald bloggers, the award-winning Jack Marx, was sacked without warning by Fairfax after he posted a satirical article imagining what Opposition Leader Kevin Rudd got up to at the New York strip club. Purely in the interests of free speech you can hear his side of the story by clicking here in a new podcast. 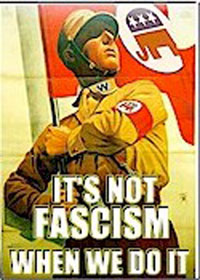 But seriously, one of the most powerful, non-violent forms of resistance we have is our ability to boycott. I am so worried about the new Bill being presented that I’m repeating most of this very good article by Paul Rockwell, written in 2004, to highlight exactly what we are losing if we allow this Bill to go through … and

we only have until September 5 to do something about it … one wonders whether they’re strategically trying to slip it through while we’re all running around frantically trying to stop the Gunns Papermill going ahead? :

The Role of Boycotts in the Fight for Peace

As peace organizations formulate strategy and co-ordinate actions, the teachings of Arundhati Roy, the most visionary and sagacious strategist on the world stage, take on immediate significance.

In her address at the World Social Forum in Porte Allegre, Brazil, January 27th, 2003, Roy put out a call for a new strategy of non-cooperation.

“We could reverse the idea of economic sanctions imposed on poor countries by Empire and its Allies. We could impose a regime of People’s sanctions on every corporation that has been awarded a contract in post-war Iraq. Each one of them should be named, exposed and boycottedâ€”forced out of business. It would be a great start.”

Weekend protests, Roy tells us, are not enough. “What we need to discuss urgently are strategies of resistance…Gandhi’s salt march was not just political theatre. In a simple act of defiance, thousands of Indians marched to the sea and made their own salt. It was a direct strike at the economic underpinning of the British Empire.”

For Roy, it is not enough to communicate ideas, to write letters to Congress. “We must make it materially impossible for the empire to achieve its aims.” She does not ignore elections. But she believes that “Free elections, a free press, and independent judiciary mean little when the free market has reduced them to commodities available for sale to the highest bidder…The machinery of democracy has been effectively subverted.”

Boycotts have often changed the world. The American Revolution began with the Boston Tea Party. The non-violent movement that brought down the British Empire included Gandhi’s boycott against British textiles. The Montgomery bus boycott launched the civil rights movement. The United Farm Workers in the U.S., led by Caesar Chavez, were unionized through laborious national boycotts of lettuce and grapes. And of course, the international boycott of South Africa played a vital role in bringing down the system of apartheid.

I wonder if I can safely link to another blogger’s boycotts without being sued?

Shawn at Kowai has a page where he lists his own Boycotts:

I have a few companies or places to whom I will never give my money. This comes from my belief that the only effective consumer voice is your money. So I choose to not give my money to those with whom I disagree. It likely sounds a little pretentious, but itâ€™s my damn money.

Well, as I cook and clean, looking pretty much like the “Mommy” in the picture above (OK, OK …. so I’m a trifle older!) I am muttering under my breath and saying, “Aikido, Aikido …” as often as possible to reduce my rage. THIS BILL WOULD MEAN, IF WE ASKED OTHERS TO JOIN US, THAT WE WOULD BE SUED FOR REFUSING TO BUY PRODUCTS WE BELIEVED WERE BAD, BUT IF THE COMPANY DAMAGED OUR WORLD AND OUR CHILDREN’S FUTURES ….. whack!!!!! oops, broke too many eggs.

SOMETHING IS STARTING TO SMELL REALLY BAD. My personal action today was to put indoor potplants into nearly every room in the house to try and freshen the air!

My political action was to attend a gathering with the Shadow Environment Minister Peter Garrett to see what he REALLY thinks about uranium mining …. and to ask some hairy questions. Then I came back to my kitchen (where I belong?)