I am such a hoarder! I still have my Moscow Olympics underpants which continue to be a great source of amusement to my friends. Nevertheless, today I was really glad that I’ve had such an inability to throw things out (a part of my life that still needs addressing) because for today’s personal act I decided to stop using tissues as much as possible and go back to using hankies – just me at this stage because I’m not really up to another “marital eco-fight” today. I haven’t used hankies for 25 years or more but managed to find some lurking in the nooks and crannies of my chest of drawers. Up until now I’ve rationalised using tissues because of health and hygiene reasons. If bird flu comes I’ll definitely go back to tissues … but in the meantime, and when I’m only battling hayfever not flu, I’ll use my old hankies. As soon as I picked them up I was flooded with pleasant memories of my childhood. Who would have thought a “snot-rag” could be such an emotional trigger, not to mention the overlay of memory that has now been added to it as I stood sniffling in the icy cold wet weather by the side of the soccer field this morning. 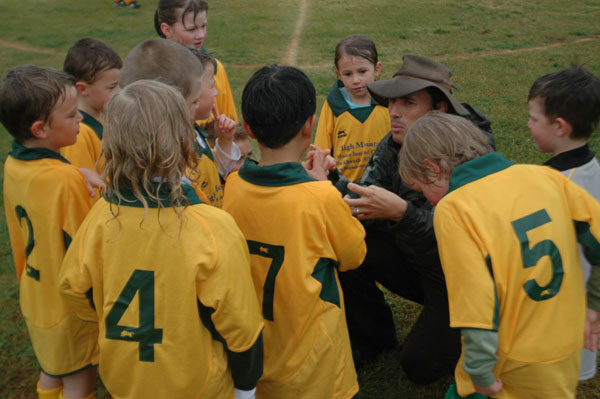 Watching my boys with their coach really highlighted for me the role of good leadership. It was wet and absolutely freezing but they gave the game their all and won. They won because they worked together and trusted their coach who, in turn, knew how to get the best out of them.

For my political act today I asked a couple of the parents to come to Springwood for the parent’s event outside our Federal MP’s office on Monday. If our leader isn’t paying as much attention as we’d like, then its simply up to us to raise our voices.

Every now and then I look at what I’m doing and think how small and insignificant the changes I’m making seem to be. On days like today, though, it becomes clear that the daily persistence of changing one tiny little thing after another slowly adds up and becomes quite a major shift in thinking and behaving … and feeling, for that matter. Today, for example, I went shopping at Aldi for the first time in probably over 6 months because the boys’ soccer season started again and we had to make the hike to Lithgow for them. I used to shop there regularly because, even accounting for the long drive and cost of petrol, the groceries were so much cheaper that it was

Last year when I started trying to drive less I began to buy as much as possible in Blackheath. Before I knew it, I hadn’t driven to Lithgow for over 6 months. When I used to shop there my trolley was always so full things were falling off as I shoved my load to the checkout. Today I barely half filled it.
Instead of getting excited at all the things I could buy I was horrified at how nearly everything was heavily packaged, usually in plastic. Even most of the fruit and veges were heavily packaged. In my previous shopping trips I’d developed an Aldi shopping pattern that I nearly always repeated like clockwork … today, every time I went to reach for something I looked at it quite differently – don’t want that, it’s in plastic; don’t want that it can’t be recycled; don’t want that it’s electrical; don’t want that, it’s imported; don’t want that I can get it from the beekeeper; don’t want that I can buy it in bulk at the co-op or health food store in Blackheath ….. I surprised myself with how much I’d changed … and, as a bonus, how much money I ended up saving. I didn’t let myself get sucked in by the tempting specials that used to lure me there. Every bit of paper and cardboard made me think of our “carbon sink” forests being chopped down, and every bit of plastic made me think of petro-chemicals and people dying around the world fighting for them – not to mention the nasty chemicals leaching out of them and the CO2 emissions to produce plastics from them … and if course the landfill problem later.

Even the boys easily accepted it when I said I wasn’t getting them any toys and, for the first time on a trip to Lithgow, they didn’t ask to go to McDonald’s! I no longer think it’s kind buying them a plastic toy – each new plastic toy makes me wonder whether my act of buying it could be the act that finally takes the world over its tipping point. I DO NOT WANT TO BE LIKE THE PERSON WHO CUT DOWN THE LAST TREE ON EASTER ISLAND. Of course I doubt that I can totally stop buying them things but at least now they quite happily accept that new toys are only for Christmas and Birthdays – not every shopping trip.

Vincent Van Gogh once said: “I want the world to know what is in the heart of such a nobody.” I really want the boys to know when they get older what has been in my heart, how much I loved them, how much I loved this beautiful world and how much I loved being alive. I also want them to know how dreadfully sorry I am that I inadvertently took so many actions that caused damage to the atmosphere and their planet and that I’m now trying as hard as I can to make up for these mistakes. It fills me with great sadness to know that they will inherit from us a world that has been torn apart by our actions – in so many ways a lesser world than the one we had the pleasure of enjoying.

Fortunately, though, on this last Saturday in April, we’re still all alive together and enjoying our world now, so I forced myself to stay away from the computer to have time with them. Instead of weakening and going to the Wattle Cafe for their favourite Sticky Date Pudding, I found a recipe and we all made it together. Oh dear, now I’m worrying about the fact that I used imported dates! The more you start thinking about this the more complicated it gets.

(OK – I just looked it up. Australia does grow dates in Alice Springs – I just need to find out where you can get them. Local production in 1994 was estimated at only 5 tonnes so there is apparently considerable potential for an increase in local production in Central Australia, although they do need quite a lot of water) 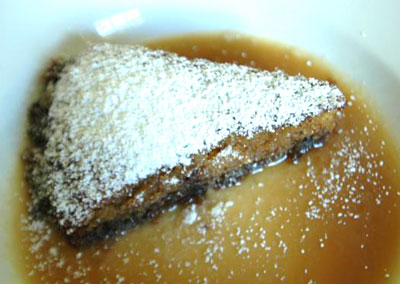 Sprinkle soda on dates, pour on 2/3 cup boiling water and set aside. Cream the butter and sugar, add eggs one at a time, beating until light and fluffy. Stir in the flour, then add the soaked dates. Turn into a greased and lined 20cm springform pan and bake at 190C for 30 minutes, or until it tests done.

Combine sauce ingredients in a saucepan, stir over moderate heat until sugar is dissolved, then bring to the boil. Cool.

Serve warm sprinkled with icing sugar and cream or icecream.

After the boys went to bed I did use local ingredients and cooked up my first ever Chilli Jam from my first real chilli crop. I have been quite stunned at the number of chillis one plant can produce. By combining them with onions and tomatoes from my garden I made enough to fill 7 jars with chilli jam … that should get me through the winter, and the lemons that were cooked in it are absolutely delicious to eat afterwards – they won’t last beyond tomorrow! 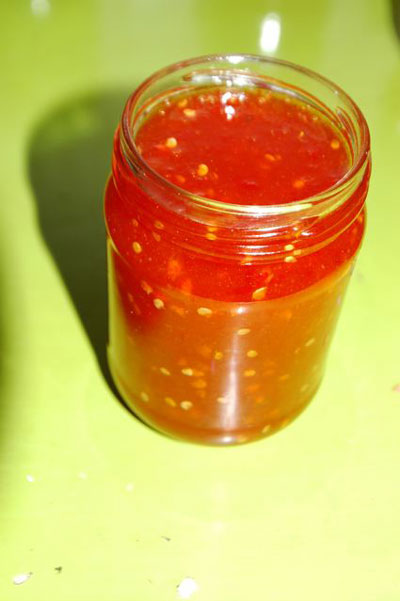 Combine everything in a saucepan and stir until boiling, then boil for at least 40 minutes or until the “jam” has reduce enough to thicken when a bit is placed on a dish in the freezer for two minutes. Take out the lemons (they are delicious), blend and pour into sterilised jars. This should keep over winter if you refrigerate after opening.