Thank goodness the storms have stopped today. I simply couldn’t bring myself to even think about the naked bike riders yesterday in the sort of weather we were having. You can read about them here: Cyclists bared all to protest car culture Having taken my own bike out for its inaugural ride recently I am 100% behind (metaphorically, not literally) what they are doing although not even global warming would get me to do the Lady Godiva. 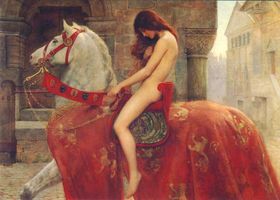 They have a point though – particularly with regard to the fragility of the human body. Lots more people would ride bikes if there were safe biketracks and they didnâ€™t have to risk life and limb to battle for space with cars. Judging by the anger my slow driving elicits in some people I canâ€™t even begin to contemplate how much animosity there is towards bike riders on the road. If, as Iâ€™m told by some, driving at 90km on the highway is dangerous, then what chance do cyclists have? Just over a year ago (end April, 2006) we made a small video at Blackheath Public School called We Have A Dream – it focussed on the dream that the school has of inspiring everyone to help look after the planet through simple actions like walking and riding bikes, not using harmful chemicals, growing your own food and thinking globally while acting locally. Our video was selected from thousands of entries across Australia for the Super School Video competition and screened on Channel 9â€™s Today Show.

We still have a dream … and while many of our earlier dreams for the school are well on their way to being realised (we now have watertanks, we’re putting in garden beds to grow food, we’re running a community market and we’re raising funds for solar panels …) one very big dream is yet to be realised. We need a bike/multi-purpose track to link the towns of the Blue Mountains so that our children will be able to get around safely. As this is a long term

project we need to start now if we want a track by the time they become teenagers. We also NEED a multi-purpose bike trail to allow more people to cycle safely for the following reasons:

â€¢ to reduce congestion on the highway

â€¢ as a back up system when inevitable power outages occur – trains are currently powered by coal fired electricity and will continue to be until better systems are devised. Outages can occur when demand on electricity outstrips supply, when bushfires damage power supply and when prolonged drought reduces water available for coal fired power stations

â€¢ to encourage eco-tourism; As other tourism destinations suffer because they can only be reached by car or plane, the Blue Mountains is in a unique position to be able to attract visitors by rail who will then be able to cycle around the region. As there are so many tourism operators this is crucial for their long term viability and will help the region to withstand inevitable drops in the number of people travelling because of petrol hikes etc

â€¢ to have alternate methods of transport available when oil becomes too expensive, or when there are disruptions to oil supply (extreme weather events, terrorism etc)

I have a dream …. that we will all work together to get a bike/multipurpose trail for the Blue Mountains. One of the best ways to do this is to start lobbying our local councillors and our State and Federal Government. Apparently the Government did release an Action for Bikes: BikePlan 2010 in September 1999 (RTA 1999). It was a 10-year plan for the creation of comprehensive bicycle networks across NSW. The $251-million program was to create an average of 200 kilometres of cycleways each year. Projects implemented in the Sydney area in 1998-99 include stage two of the Parramatta bicycle network, connection of the Parramatta Valley cycleway to Homebush Bay, three cycleway linkages between Homebush Bay, Auburn and Lidcombe railway stations, and educational campaigns and events to promote bicycle use. Time to do something about this now. On the personal front the rain made me realise how quickly we forget. When it was hot and dry and I needed to water the garden I was very frugal with water. As it’s cooled down I suddenly realised my response to the water crisis was starting to cool down too. Because we have a bath, which I share with the boys, we technically don’t need to let any of it run down the drain. Unfortunately, because of the way our house is built, we aren’t able to fit greywater pipes to our bathroom water. We have been bucketing water to the garden (when I feel energetic enough to and when it is hot and dry) and to flush our toilet, but today, while the bathwater was still warm, I bucketed it into our washing machine and did a load of clothes. One bath holds enough water to wash your clothes and flush the toilet all day for a family of four … with a small bit left over for the garden.

Politically I blogged on other sites and went to our monthly Blackheath Climate Action Now meeting.