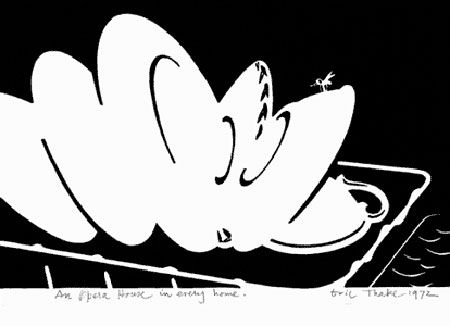 Eric Thake
An Opera House in every home, 1972

On days like today it is so fantastic to be alive! I’m even starting to love catching the train to Sydney. The serendipitous nature of travelling with other people and unexpectedly bumping into friends, or making new ones, is quite a lovely surprise to someone who has always driven a car. Today we bumped into Josephine who was on her way to Queensland to do a week’s voluntary work for Courage to Care

“Courage to Care is directed towards students from years 5 to 12 and comprises an exhibition and an associated education program. The stories of non-Jews who risked their lives to save Jews during the Holocaust are the starting point for the program, which relates these historic events to issues facing todayâ€™s students, such as bullying, racism and stereotyping. It demonstrates the power of each individual to make a difference.”

Josephine told me about her mother, Sabina van der Linden, who was the guest speaker for the opening of the National Holocaust Memorial in Berlin, Germany in 2005:

Holocaust survivor Sabina van der Linden riveted the audience with a deeply personal story of loss, terror and survival in Nazi-occupied Poland.
An 11-year-old girl when the Wehrmacht occupied her town in July 1941, she was sheltered at great risk by a Christian family and later survived by hiding in a forest. Her parents and brother died in the Holocaust.
In a message of reconciliation that won the longest applause of the afternoon, she said there could be no collective guilt for Germans and that her survival represented â€œa victory of all decent people over evil.â€
â€œWhat have I learned?â€ said van der Linden, of Sydney, Australia. â€œI have learned that hatred begets hatred. I have learned that we must not remain silent and that each of us must fight discrimination, racism and inhumanity.â€

On the Courage to Care site I also found this quote by Robert F. Kennedy:

a man stands up for an ideal, or acts to improve the lot of others, or strikes out against injustice, he sends forth a tiny ripple of hope, and crossing each other from a million different centers of energy and daring those ripples build a current which can sweep down the mightiest walls of oppression and resistance.”

In the same carriage we bumped into Alison who taught the boys how to play piano – one of the greatest joys in their lives. She told me that it was now a whole year since her friend Lincoln Hall was rescued on Everest. Apparently his book about the experience has now been published. It reminded me how quickly time flies and how soon the 8 1/2 year tipping point will be upon us. The thought of Lincoln’s courage continued the “courage thread” in the day started by Josephine.

Not long after that we arrived at the Opera House to see Circus Oz’s first Sydney Performance of “Laughing at Gravity”. Aunty Margaret has decided to give the boys tickets to shows as birthday presents, instead of buying more plastic junk. Last year it was Cirque de Soleil, this year it proved to be even better with Circus Oz.

Well, if anyone has courage the performers in Circus Oz do – not just physically but psychologically. We were congratulated for coming to Australia’s prime terrorist target to see the show and then the performers went from one breathtaking stunt to another, with ballsy rock music and with clever and witty references to all that dares to undermine a healthy society for our children. If you know anyone with a child buy them a ticket QUICKLY, before the season sells out – my boys are begging me to go back, my throat is still sore from screaming and cheering, my stomach is aching from laughing and I can hardly type because I bruised my hands so badly from clapping as loudly as I could. Talk about a workout!

It’s worth quoting from Mike Finch’s director’s notes in the catalogue:

“The essence of the Circus is diversity and co-operation – a lesson for the planet. It takes all sorts of people to make a human pyramid. Stong bases, responsive middles, fearless little flyers … For us, Circus Oz is also a place to celebrate our unique Australian culture. Our ensemble is made up of a diverse mob of amazing performers, technicians and organisers with a pretty awesome set of skills, with a strong sense of self and community built from years of trust and travel together across the planet. They also have the rare ability to laugh in the face of adversity, chaos, crisis and gravity.
Our group is our community and reminds us of how important local connections are. We resist (and often lampoon) the homogenous global culture you see all over the media, largely generated in North America. The people in Circus Oz are simultaneously ordinary and extraordinary Australians. When we play to you tonight, we hope you recognise yourselves, your mob, your place, your culture, the inherent danger of living, the thrill of surviving, and YOUR ability to laugh in the face of adversity, chaos, crisis and gravity.”

As one of the performers farewelled us at the end of the show, she told us that “Laughing at Gravity” was dedicated to tolerance, diversity and human kindness.

MIKE FINCH YOU’RE A BLOODY LEGEND! GIVE YOURSELF A PAT ON THE BACK.

Now I want to run away and join the Circus …..

Oh dear, in the face of what Circus Oz is doing my personal acts seem insignificant to say the least. Nevertheless, imagining myself to be one of the technicians doing my bit to keep the show on the road, I resisted all the Opera House marketing and even had the boys agreeing that we would look at all the things for sale and use them as inspiration to make something ourselves. They both agreed that we didn’t need more “stuff” at home (phew because it was all so expensive).

I was then thwarted in my strategy of bringing water bottles from home because we had to leave our backpacks in the cloakroom. If there’s ever a ‘next time’ I’ll know to put a little drink bottle in my handbag. There were jugs of water, which was great, but the only way to drink them was in plastic cups. We all shared a cup and instead of leaving the disposable cup there I did my usual thing of popping it in my bag to take home for my “guilt garden”. This also meant that we were able to reuse it in intermission. It’s a very, very small thing but we only used one plastic cup instead of 6, and the one we did use hasn’t gone into landfill. We bought it home and made our own souvenir with a texta and a bit off a bigger cactus – we helped the environment and saved money: 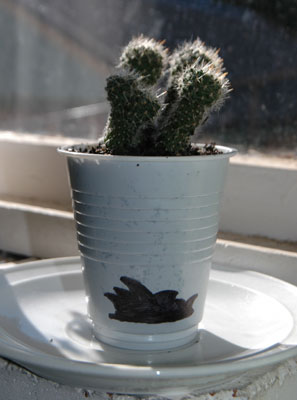 The only Downer (sorry about the pun!) about the whole day was reading the copy of The Daily Telegraph that the people next to us gave us when they got off the train. The article that really dismayed me was “Green flying tax is just plane silly”

I submitted this to their blog and will also send a hard copy as a letter to the editor:

I don’t see myself as an eco snob but as a mother who’s very worried about the future for her 6 year old twin boys. The biggest user of power and therefore producer of Greenhouse gases in our households are our hot water systems. This is also the biggest expense for us in our electricity bills. With power predicted to get MUCH more expensive, it is the average person like me who is going to suffer the most. It looks like power is going to get so expensive, not because of taxes but because power stations need so much water to operate that the drought is forcing them to buy water.

With regard to flying, which is a HUGE emitter of greenhouse gases, perhaps the solution would be to tax according to frequency of flying. As you say Anita, flying has never been cheaper. Because I might only fly once a year, if that, I wouldn’t mind paying a small tax per flight seeing as tickets now really are so cheap. That way I could still show my children the world, but wealthier people who fly as regularly as we catch the train, would have to either pay for the privilege or start planning ahead and using the other tools at their disposal like videoconferencing.

With regard to driving the car, we don’t need to buy new cars. If we all slowed down we could lower our cars’ carbon emissions by 20% and save young people’s lives at the same time because, as well all know, speed kills.