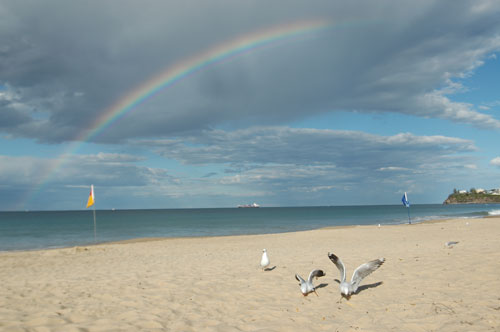 Maxie and Oscar were very surprised to see this rainbow today … Maxie’s response was “I always wondered what was at the end of the rainbow but there isn’t anything … it just ends in the cloud.” Why did it make me feel so sad to hear that? Looking at this scene I wondered if it was a coal ship that I could see on the horizon … sort of near where the rainbow ends?

Judy Garland’s poignant words from Wizard of Oz drifted through my mind ….

Somewhere over the rainbow… way up high
There’s a land that I heard of
Once in a lullaby.

Somewhere over the rainbow… skies are blue
And the dreams that you dare to dream
Really do come true.

Someday I’ll wish upon a star
And wake up where the clouds are far behind me.
Where troubles melt like lemon drops
Away above the chimney tops…
That’s where you’ll find me.

If happy little blue birds fly beyond the rainbow
Why …

This is the second time the Wizard of Oz has crept into this blog but it’s such a metaphor for our times, especially as I read of more tornadoes in America. Even Vogue seemed to think so a couple of years ago: 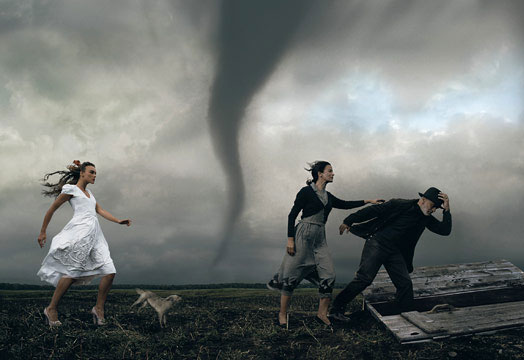 The Wizard saved Dorothy but there still seem to be a lot of scarecrows without brains, tin men without hearts and lions without courage … and they’re all following that very profitable yellow brick/gold bar road … just as they were when the World moved into the second World War (The Wizard of Oz was first screened in 1939). No wonder it’s so relevant to our current Zeitgeist.

Oz, and our children, need a real Wizard now, but where is he or she?

Maybe he/she lives up here around Maleny … it’s certainly as green as the Emerald City! When we visited my mum’s friend Fred today, he talked about how whenever people chop down the trees the dry follows. Maleny still has lots and lots of trees, and lots and lots of rain (“rainforest”) so it’s no wonder that it attracts so many creative and alternate people interested in a self sufficient lifestyle.

Today the boys and I learnt more about gardening from Fred. Here he is in front of the LabLab vine – an edible bean that is unbelievably prolific and is a food staple in Africa and Asia. You do, however, need to boil it twice, in fresh water each time, to take out toxins. 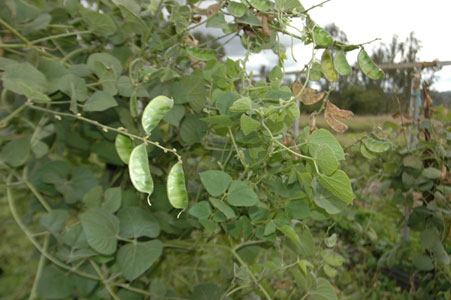 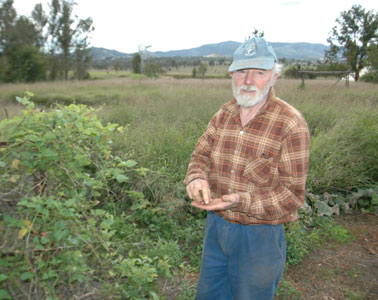 Here are some of the Lablab bean seeds 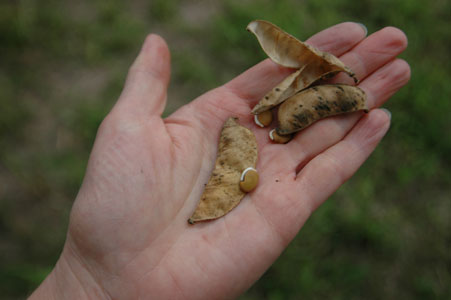 and some Madagascar bean seeds: 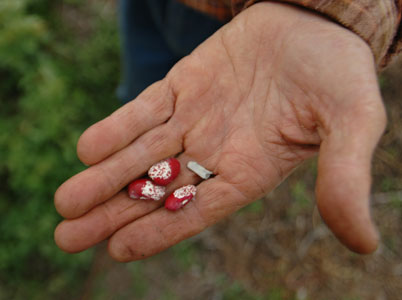 And here are some macadamia nuts growing … 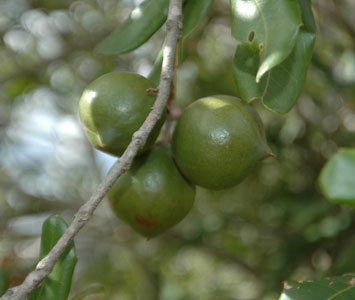 and then Oscar opening one of the ones he found under the tree: 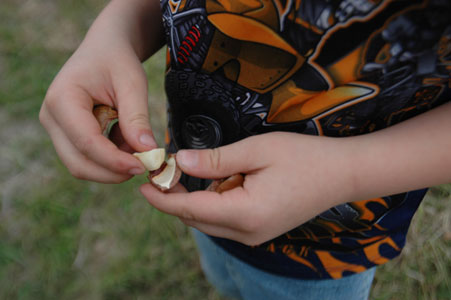 and the thing the boys loved the most … learning, very carefully, how you cut grass with a scythe … much harder than it looks: 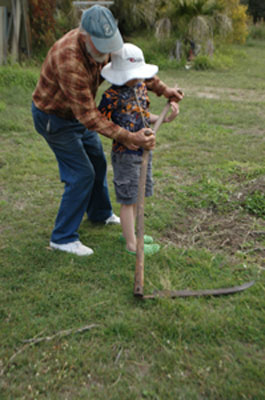 When we got onto the subject of grass we both got very cranky about the planting of Gamba Grass which grows 4 metres tall and burns hotter and more fiercely than anything else in our tropical savannah – it is such a fire risk and believed to be planted deliberately by farmers under trees so that they can landclear unofficially. It is appalling it hasn’t been completely banned in this country. Click here for more about it. When you clear land you not only destroy habitat and trees that soak up carbon, but also moisture and the cooling effect that trees provide.

After leaving Fred we caught the last of the beautiful warm weather at the beach. I got talking to another parent about global warming (as I always do). He told me he’s one of a number of people in the area who’ve worked out how to make cars that run without fuel … all of them want to keep it to themselves because they’ve been burnt by “the big boys”. There is so much going on everywhere and so much suspicion of our “system”. 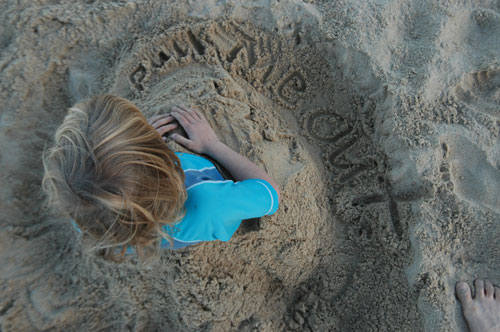 I came home and stayed up most of the night writing letters to politicians about Gamba grass and global warming. The most important thing, no matter how futile it seems, is to keep trying to do something about all this.

I was thrilled to find this on the Consumption Rebellion Blog

The arguments for doing nothing will always be with us:

In politics (“All politicians lie.”),
in economics (“There will always be poor people.”),
in law (“Sure the judicial system is imperfect, just like everything else.”),
in business (“The market forces will correct it.”),
in society (“What are you, a Johnny Do-Gooder?”),
in the military (“War is Hell. That’s what happens.”),
in environmentalism (“The Earth is constantly changing.”),
the list goes on and on.

We got out of the caves because we refused to listen to these arguments.

There will come a time when Mankind looks back upon our time as if we had lived in caves. And they will have progressed to where they are because of a long line of people who refused to do nothing.

There is always a better way.

4 thoughts on “I'm off to find the Wizard, the Wonderful Wizard for Oz”