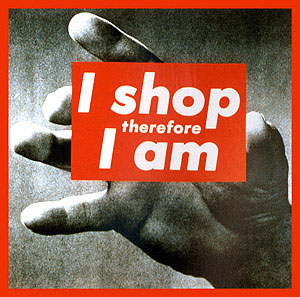 In the past whenever things got a bit rough I resorted to retail therapy. This poster by Barbara Kruger was on my wall twenty years ago. Shopping, however, no longer holds the same allure because the price tag has gone up so steeply. Shopping = money + planet + childrens’ future. Nevertheless, while I don’t really crave the retail part as much anymore, I do still crave the therapy. I think that’s why I’m loving exploring the web and visiting the sites I’ve bookmarked in my blogroll – they’re like a giant shopping mall, but instead of shopping for objects I’m shopping for inspiration and ideas.

last two days have been fairly heavy going so I’ve done a lot of window shopping – today I spent some time at Great Green Goods. This site is jampacked with examples of adaptive reuse and recycling and I always come away from it wanting to start making things myself. I also discovered, in one part of the mall, that Barbara Kruger is still going strong and her work is part of a website of artists dedicated to creating a culture of resistance. Here’s a more recent image that she’s made, based on the American Flag: 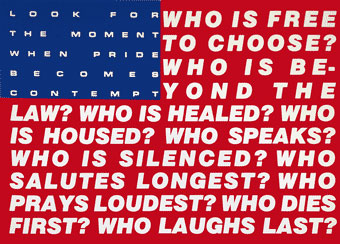 I’ve been unable to stop thinking about the text in the blue corner – “Look for the moment when pride becomes contempt.” I think, in the light of recent news from our leaders in America and Australia, their lack of decisive action on climate change shows the utmost contempt for us and our children. While it’s easy to put off action until after the election, Economists around the world have been ringing clear warnings all year that action now will be cheaper than action later. Unless of course you’re a government wanting to get re-elected. Sound cheap now, sock the silly bastards later …. “Look for the moment when pride becomes contempt”.

Now you know why I’ve been resorting to retail therapy.

After I took the boys to school yesterday I came home, threw myself on the bed and cried and cried and cried. IT WAS ONE OF THOSE DAYS. Everything seemed too huge and insurmountable. It started from the minute I woke up when I read an article from The Independent with the soothing title:

Then, after the disappointment of hearing that the Federal Government is refusing to set carbon emission targets until after the election and that they will be aspirational not mandatory, yesterday’s news said that the polls are starting to turn in the Government’s favour. By choosing not to set targets now the Government is giving a false message that there is still plenty of time to act … and people seem to be buying it.

Why is this so? One reason is that the Green Movement so often only speaks to a certain demographic. Its members are seen as “eco-snobs” (as they’ve been saying in The Daily Telegraph), who drive a Toyota Prius, can afford solar panels and ethical investments, who have the time and space to grow veges and make compost, and who buy carbon credits for anything they do wrong. The Environmental movement’s message doesn’t resonate with people who have no money to pay their rent or their mortgage, no time to read newspapers, absolutely no chance of ever being able to afford solar panels or watertanks, no backyard, and no scientific background or confidence to even begin to understand what something like the IPCC is! Most people in this world are just struggling to get through each day – they can’t even begin to think about 5 years down the track.

This Huffington Post article, The Unbearable Whiteness of Green, spells out the issues in some detail and shows that a green backlash is happening even to the Terminator:

Everyone loves to brag on Governor Arnold Schwarzenegger for signing our global warming legislation. But nobody talks about the fact that a few months earlier, the majority of California voters here REJECTED a clean energy ballot measure.

That’s right. Elected officialdom might be willing to take major green steps. But six months ago, when Californians got to speak up in the ballot booth, ordinary people said no.

It is important that we study this defeat – and pull out the lessons going forward. The idea for Prop 87 was brilliant in its simplicity: California would start taxing the oil and gas that we extract from our soil and shores. And those dollars would go into a huge, “clean-energy” research and technology fund.

Many states and nations have similar excise taxes. But California would have been alone in dedicating the revenues to inventing alternatives to carbon-based energy sources. Had it passed, money from oil would have been used to find a replacement for oil.

It was a brilliant idea. And at first, the measure was polling off the charts. Silicon Valley and Hollywood put $40 million on the table to ensure the measure passed. Al Gore and Bill Clinton campaigned for it. Victory was certain.

The Polluters Will Organize Everyone We Exclude

But in the end, Californians voted the measure down. Why? Because big oil convinced ordinary Californians that the price tag for them would be too high for them to bear.

The oil and gas industry warned that the tax would be passed along to consumers -pushing gas and home fuel costs through the roof and hurting the poorest Californians.

It was a predictable line of attack. It was also a false argument. Our local oil and gas prices are fundamentally set by the huge, global energy market. A teeny local excise tax in one state, in one country, would have had a miniscule or negligible impact on California consumers.

And to the contrary, the benefits of a shift to cleaner energy would have HELPED the poorest in the state – significantly improving both their health and their wealth.

For one thing, disproportionate numbers of low-income people live near oil refineries and other sources of dirty-energy pollution. As a result, they suffer from higher rates of cancer, asthma and other illnesses. Largely uninsured, they then pay through the nose for inferior medical care.

In other words, the dirty energy economy is literally killing poor people. A switch to cleaner energy could save untold lives.

Beyond that, a clean-energy economy actually is more labor intensive – meaning, it creates more jobs. After all, somebody has to install and maintain all those solar panels, build all the wind farms, construct the wave farms, weatherize those millions of homes and office buildings.

It’s worth reading the whole article. On 1st June, Sharon Astyk also tackled the issue in her blog Casaubon’s Book where she quotes Harvey Winston’s reasons for the “lily-whiteness” of environmental movements:

1. The public bigotry of some of our spokes people is a turnoff .
2. Doomerism is a turnoff because it makes the disaster for poor and non-white people seem inevitable, and thus not worth resisting.
3. The war of all against all destroys trust – that is, poor people know that they are the evil marauding hordes everyone is talking about shooting.
4. A lot of prominent peak oil figures don’t believe in collective action
5. Poor people are priced out of most of the solutions available.

She finishes her discussion by saying that:

“the one bright spot in this future is that peak oil and climate change represent the greatest hope for reallocation of wealth and justice in the world.”

Well, apart from window shopping, my “new” actions have been small. Yesterday I tidied all day and started a large bag of clothes for the Smith Family – I’ve been hoarding long enough. I also organised with a friend that we’ll have a joint garage sale in a week to offload more “stuff” that other people can use.

Today I got a large old plastic shampoo bottle and had it filled with Castille soap from the Co-op. I’m going to explore using it to make my own shampoo (although the Wiki entry suggests that it may dry hair out?) and it’s also good to be able to buy soap in bulk without a plastic container.

Politically I’ve been blogging from here to Timbuktoo, signing polls and sending out emails.

But mostly I’ve needed lots and lots of therapy. In my last bout of window shopping I found dozens of amazing new items that have been developed for the poor and showcased in an exciting exhibition in the U.S. called Design for the other 90%

If you feel in the need for some hope go wandering through this site for a while – here’s one example of what you’ll find: 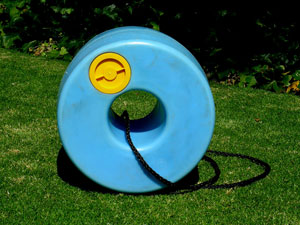 Millions around the world, especially in rural Africa, live kilometers from a reliable source of clean water, leaving them vulnerable to cholera, dysentery, and other water-borne diseases. Water in adequate quantities is too heavy to carry. The Q Drum is a durable container designed to roll easily, and can transport seventy-five liters of clean and potable water. Rolling the water in a cylindrical container, rather than lifting and carrying it, eases the burden of bringing water to those who need it.