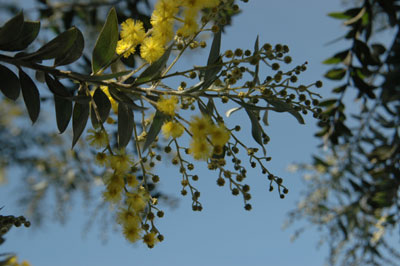 Seeing wattle flowering all the way down to Sydney today kept me focussed on how unnaturally warm it has been. This wattle doesn’t usually flower until July. It’s strange how extremely beautiful weather can be really disturbing when it happens at the wrong time of year. Seeing the wattle made me feel even worse about driving down to Sydney but I found the usual excuses for my behaviour – I’ve got a lot of electrical equipment and boxes to carry to give my climate presentation and then I have to get very quickly from one end of Sydney to the other … meanwhile, 5 hours of carbon emissions later … that was a lot of time to ponder … 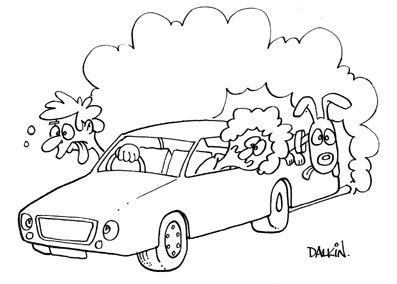 It was then that it came to me … on the road to Damascus Sydney (I’ve been hanging out for an excuse to use that crossing out button on my edit bar!). Until I finally make the move to do something about this car, the easiest thing I can do is to drive more slowly (dur!)

In the EU’s strategy to reduce carbon emissions from cars they write:

So, that’s done it … from now on I’m committing to driving 20km per hour lower than the speed limit (except in 40km zones) … people are definitely going to notice that!

I did it all the way home from Sydney tonight … a 2 hour trip … and it was one of the most surprisingly liberating things I’ve ever done in my entire life. (Get a life, I hear you say!) Hundreds and hundreds of cars passed me and I had this amazing sense of “driving” against the tide … this tide that’s hurtling us into self destruction. Ian will never believe it! He always tells everyone that I have the land speed record for the trips from Orange to Dubbo and Orange to Sydney. I have always been a speed freak … until today. I’m stunned that I did this and also quite surprised at how easy and pleasant it was.

I’m now designing a sign for the back of my car that will say something like this:

I AM DRIVING SLOWLY TO REDUCE MY CARBON EMISSIONS – HONK IF YOU CARE ABOUT THE PLANET TOO!

That way I won’t let anyone with road rage daunt me … if they start beeping at me I’ll just smile and wave because it will obviously mean that they care about the planet too!

An added benefit of course of all of this is that I’ll save a lot of money on fuel.

Also on the programme with me were:

Peter Andrews of ‘Natural Sequence Farming’ talking about his methods of naturally enriching the land with water and nutrients by working with nature rather than against. He was being interviewed on Catalyst tonight.

A lot of what the other two speakers were talking about sounded to me like the principles of Permaculture which I’m studying at the moment – focussing on developing and looking after your soil which is essential for growing things and is also a major carbon sink.

There wasn’t time for much other action because I didn’t get home until 10pm after the first get-together with the Sydney Climate Change Presenters … and my slow driving!