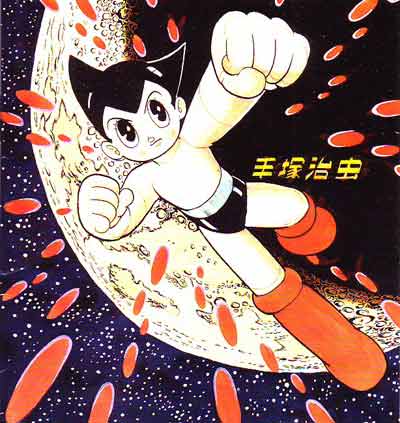 Children love the idea of robots. This morning Maxie was playing his favourite game of being a baby robot. I commented that his piano playing showed a lot of feeling which was unusual for a robot. His arms were moving up and down stiffly as he came in to me and said, in a robot voice, “that’s because I switched on my human flexibilities Mummy Robot”.

Thank goodness for our human “flexibilities” and who knows, maybe one day a baby robot, like Astroboy, will help us save the world.

“The Gravettians of 27,000 years ago were able to survive in harsher climatic conditions than the Neanderthals. They seem to have been more flexible and able to switch mobility patterns, at times settling in large camps with stable supplies, at other times dispersing and diversifying to gather scattered and varied food resources. But the extensive spread of so-called Venus figurines at this time across Europe and Asia, as far east as Lake Baikal, gives a further clue to the success of these Cro-Magnons: their wide social networks. While Neanderthal social groups probably stretched their contacts over miles, through sending social messages in the forms of symbols and trade, the Cro-Magnons straddled continents. This gave them the potential to exchange mates, information, resources and ideas over wide areas and increased their effective group sizes enormously, all important when local resources were unpredictable and it might be necessary at times to rely on the support of neighbours to bale you out.

Of course the Gravettians in Europe probably only ever numbered in tens of thousands, rather than millions, and they only had to worry about crossing social and geographical, rather than political, barriers. However, the importance of cooperation rather than conflict in challenging times is a lesson for Europe and the world today. As stress builds up in the face of serious environmental changes, the continent could go in two different directions, following examples 27,000 years apart: Gravettian (flexibility and cooperation) or Balkan (factionalism and conflict). If we do not cooperate for the common good, we will certainly sink separately (in some cases literally, as sea levels rise). If we can face the challenges of global warming together, we can look to a new and more hopeful future.”

It is our political differences, if not surmounted, which will lead to the kind of defence and border security issues that will stop the cooperation we’ll need for human survival. Ironically, in Australia, it’s not too farfetched to imagine our children running out of water and wanting to migrate to countries with more water. How must those poor desperate mothers who we called “the boat people” have felt. They put their lives at risk to get into dodgy boats with their babies, hoping to get to Australia for their children’s futures, only to find wealthy Australians callously turning their backs on them. What an irony it would be if our children found themselves in a similar position one day.

In an article called The Thirteenth Tipping Point , which is very much worth a read, there is a discussion about how cockroaches have learned to share in ways both prudent and wiseâ€”despite the predictions of game theory, which in its simplest guise posits that cheaters will beat altruists every time. Clearly, nature knows otherwise. 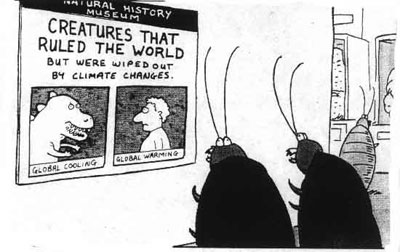 Cockroaches have been on earth about 300 million years … During those eons they have evolved what ethologists call “obligate cooperation”: an evolutionarily stable strategy that reflects the individual’s inescapable dependence on the group. They’ve survived because they’ve worked together.

There are Twelve Climate Tipping Points that have been listed in the article but The Thirteenth Tipping Point is the shift in human perception from personal denial to personal responsibility – and it is this tipping point that is the only one that will allow us to avoid catastrophic climate change.

Despite wanting to run away in order to avoid confrontation I’ve been forcing myself to buck up and continue trying to take personal responsibility for my role in this democracy. Yesterday I rang my Federal MP’s office to ask for an appointment to see him. I was told he was very busy and that I should write again. As I mentioned yesterday, before this blog I would have simply given up at that point.

When the world says, “Give up,”

So I rang the office again today, sent off the email, and in a very short space of time Kerry Bartlett himself rang me personally and made an appointment to see me on the 26th June. I’m thrilled – thrilled that he’s agreed to an appointment and thrilled that I didn’t give up. It is so easy to give up at any point in this struggle but there is far too much at stake to do so. Today I thought about my darling Maxie and his “flexibilities” and it gave me the determination to continue.

I also emailed a Greenpeace letter to Premier Morris Iemma stating my opposition to the proposed Anvil Hill Coal Mine in the Hunter Valley. Its developer Centennial Coal estimates it will produce 10.5 million tones of coal each year. When burned, this coal will produce greenhouse gases equivalent to doubling the number of cars on NSW roads. (it’s an easy action to do, just click on the highlighted link)

For my personal action I started being concerned at the amount of wastage that happens in our kitchen. Our cupboards are full of packages of food that are getting close to, or just past, their “best by” or “use by” dates. Probably once a year we throw all the “old” food out but today I decided to start ploughing my way through my cupboards to use up anything that looked like it was close to being chucked. It’s quite surprising how many packets are opened for one use, then forgotten. I guess it’s another part of the affluence that makes us one of the three highest carbon emitters per capita in the world. I’d never even really considered it before but most of those packets are plastic too and not the ideal containers for long term food storage. As I try and buy things in reusable glass containers rather than plastic, I’m also managing to gather containers to store all this food.

My strategy is to pull out everything with a “use by” date and plan all my meals for the coming week around what I find. I’m going to try one whole week without buying any food at all for myself. (I won’t do it to Ian and the boys, or the tooth fairy will be onto me again). Fortunately I’ve still got tomatoes, broccoli, silverbeet and greens in the garden.

Just before school finished, I pulled out coconut and rolled oats – coconut in particular doesn’t have a really long “use by” date so I made a batch of Anzac cookies for the boys – they loved them and it only took about 20 minutes. It reminded me that a long time ago I used to make my own muesli instead of buying pre-packaged muesli. After I’ve cleared the decks I’ll take all my new containers to the co-op, stock up on fresh, unpackaged ingredients and start making muesli again – but I’m getting ahead of myself and that’s an action for another day.

Preheat oven to 160C (315F). Place flour, coconut, sugar and oats in a bowl. Mix well. Place butter and golden syrup in a saucepan over medium heat and melt. Place bicarbonate of soda in a small bowl and add water. Stir to combine. Add bicarbonate mixture to saucepan and stir. Pour over oat mixture and stir all ingredients together.

Roll teaspoonfuls of biscuit mixture into balls and place on a greased and lined baking tray, leaving room for spreading. Flatten each ball gently with a fork. Bake biscuits for 15-20 minutes, or until biscuits are golden brown a the edges. They must be chewy so be careful not to overcook them. Allow to cool slightly on trays before transferring to a wire rack. Makes 20.