“The era of procrastination, of half-measures, of soothing and baffling expedients, of delays, is coming to its close. In its place we are entering a period of consequences.”
Sir Winston Churchill
November 12, 1936 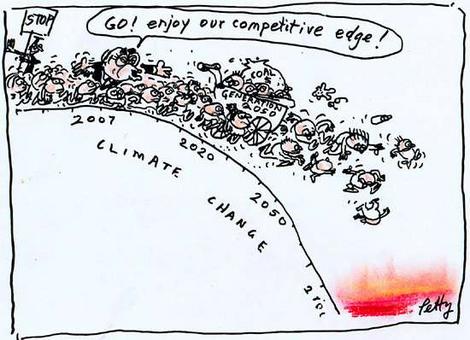 Someone emailed me this great cartoon by Bruce Petty that says it all!

While our Australian Government still refuses to set emissions targets to avert even more serious climate change I’ve decided to set my own targets – to take at least one new personal and one political action every day… in my fantasies 364 other people would hear about it and want to do it too so that, working co-operatively (hints of Kyoto here), we would achieve the equivalent of a year’s action in a day. It is this level of urgent action alone that will help us to secure some sort of liveable world for our children and allow them to live out their lives with hope.

The media keeps referring to NASA scientist James Hansen’s comments that we have 10 years to a tipping point beyond which we will no longer be able to stop the catastrophic accelerated warming of the planet –
everyone seems to be ignoring the fact that James Hansen made that comment in December 2005, almost 18 months ago, which leaves us barely more than 8 1/2 years before the so-called tipping point.

David Suzuki has described us as a fast car heading for a brick wall but everyone inside the car is arguing about which seat to sit in … meanwhile Suzuki is locked in the boot yelling “grab the bloody steering wheel”. We need strong leadership on climate change and its time to demand it.

In the world as I once new it I would have expected change to filter gradually through society over many years, inspired by the actions of individuals and small groups. It was easy to relax and let others move things ahead. The future, however, has suddenly become one that is so threatening and different to anything I’d ever have imagined that I have to pinch myself daily to stay awake and not slip back into my old habit of trusting the system to look after my children’s future.

Our children are going to inherit a hellhole unless we all start to make changes of a magnitude greater than anything we’ve ever imagined. The longer we wait the more dramatic those changes will have to be. If we start now we can whittle away at our currently inappropriate behaviours and prepare ourselves for a different world … and we can put pressure on governments to provide the necessary leadership to take us through the years ahead.

In the past 18 months I’d thought about the urgent need for political action but had stopped short of actually writing to any politicians. I’d made occasional changes, but nothing in the order of what is required to turn our world around. Why is this so? One reason, I believe, is that without consistently applied targets we humans fall too easily into a state of denial which allows us to de-catastrophise situations and therefore procrastinate.

My level of commitment to change has fluctuated and a lot of my behaviours are still only in theory stage. Yes, I no longer take the kids to McDonalds (that was a big one), yes I’ve changed the lightbulbs (well, most of them), yes I try to walk more (but nowhere near enough), yes I only buy what I desperately need (except for chocolate and … ), yes I’ve started to grow my own fruit and vegetables (but I still eat meat and fish), yes I’m trying to recycle (but I still forget to take my shopping bags), yes I’ve stopped flying (not that I did much anyway), yes I’ve switched to 100% accredited Greenpower and yes I chuck a mental if anyone leaves the lights on when they go out of the room or leaves the standby lights on at night (despite the fact that I spend hours on the computer) …. nowhere near enough, but the inadequacy of my response pales against the staggering inaction of our governments.

So much change must take place that it is possibly the enormity of the situation that paralyses everyone into a slow motion inertia. There is, however, an urgency to start taking steps now and keep taking them relentlessly every day.

The magnitude of the problem means that it has to be tackled on both a personal and a political level …. there can no longer be any separation of “us” and “them” – between citizen and leader, between one country and another. Where do “I” end, and “they” begin? Where does my responsibility end and theirs begin? What is personal and what is political?

WE ARE ALL ACCOUNTABLE TO THE CHILDREN OF THIS WORLD WHO ARE RELYING ON US TO ACT FOR THEM.

Many of the tipping points leading the world inexorably to catastrophic climate change have already passed. Let us hope the big one still lies ahead of us and not behind. I do not want to be the person who takes the action that, in retrospect, will be the equivalent of chopping down the last tree on Easter Island. Who will take the one single action that will push our world over that tipping point?

I am now standing up to be counted and taking responsibility by setting myself a firm target – one new personal action and one political action every day.

Let’s step it up and show that if people work co-operatively we can achieve a year’s action in a day!

I did it, I did it, I did it … I’m so excited … I’ve actually done, at last, what I’ve been fantasizing about for the last year … I rang Kerry Bartlett, our Federal MP, to let him know that I’m upset about Australia not signing Kyoto …. I was only able to speak to his secretary but I’m hoping that the irritation in her voice means that I’m not the only one who’s been contacting her.

It was so much easier than I’d even imagined. I wrote down what I wanted to say beforehand but it all flowed easily when she answered the phone. I basically said, “Hi, I’m a mother and I’m really worried about climate change. I don’t understand why the federal government won’t sign Kyoto when it’s so important for the whole world to work co-operatively on tackling this. Why aren’t we joining in with all the other developed countries of the world (except the US of course).” She replied by saying that we’d met our Kyoto targets and that the government had already done a huge amount. “But”, I replied, “we really only reached our Kyoto target because farmers stopped landclearing and they’ve never even been compensated for that … even apart from that though, it still doesn’t address the fact that we’re refusing to work co-operatively with the rest of the world”. She promised to send me a letter outlining everything that the government had done and then I’d have the information I needed to further understand the government’s position.

I did it, I did it! It is so much easier to phone than to write. Perhaps I’ll one day be organised enough to write too.

On the personal front I felt absolutely dreadful this morning after no sleep last night, staying up until 2am reading other fantastic inspiring blogs and planning my own blog for today. Loaded a lot of them onto the “new” section of my website.

Knew that I had to fight my tiredness or I would procrastinate again … more excuses. 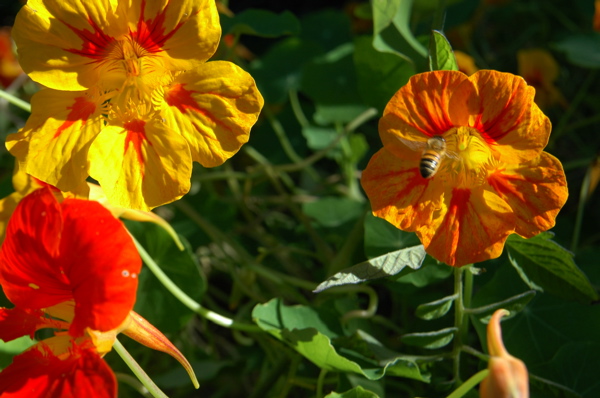 The garden was a balm to my exhausted body and mind. I followed a little bee with pollen laden legs gorging himself on the nasturtiums … if only I had my own bees and could taste some nasturtium honey … perhaps next summer. I got so close with my camera I could hear him/her buzzing but it just made me think even more about the dire news of colony collapse disorder. 70% of the bees on the East Coast of America have died, and almost as many on the West Coast. It is spreading to Europe. They’re now suggesting that mobile phones may be killing the bees off …

First up I walked across the road to buy honey from Jim Crowther the watchmaker. He’s also our local beekeeper so the honey we buy from him doesn’t have to travel long distances to get to us … thereby reducing the carbon emissions of transport and packaging and the increased cost of intermediaries at every stage of the process. Jim’s wife, Barbara, is Maxie and Oscar’s teacher this year. Barbara and Jim told me of the hive beetle which is now destroying hives in Australia – a dreadful new development. Barbara pointed out that mobiles haven’t been around that long and she wouldn’t be surprised if phones had something to do with colony collapse disorder. I wondered whether wireless broadband might also be having an influence and immediately started worrying that I was getting a brain tumour! Even though we live so close to the Crowther’s shop I had never walked over to buy their local honey until today …. my target system is working. Yeeha.

From the Crowther’s I walked to The Bogbean (health food shop) with my two recycled jars clinking in my hessian shopping bag (there’s nothing more satisfying than being prepared). For the first time ever I bought fresh peanut butter made in the shop without oil, salt, sugar or preservatives. By recycling my jars I saved packaging and avoided plastic. One of these days I’m going to get rid of all those horrible petrochemicals in my life. Found a great site today………. Living Plastic Free in 2007 EnviroWoman Makes a Pledge: No New Plastic.

I had a blissful day in the garden preparing two new garden beds … planted one with Anne Jolliffe’s parsnip seeds, Nada’s leek seeds, my coriander and dill seeds, some packet salad seeds, a rocket plant and lettuce seedlings from Rosemary Lathouris; planted another with peas and Nada’s broadbeans. My first every winter crop Levitra no prescription uk planting.

The boys played with Ahlia, and later Saxon – making origami, having a picnic under the trampoline and walking the tightrope (or loose rope as it turned out) … they had a ball (way better than fighting over an X box! and lots more fresh air too) 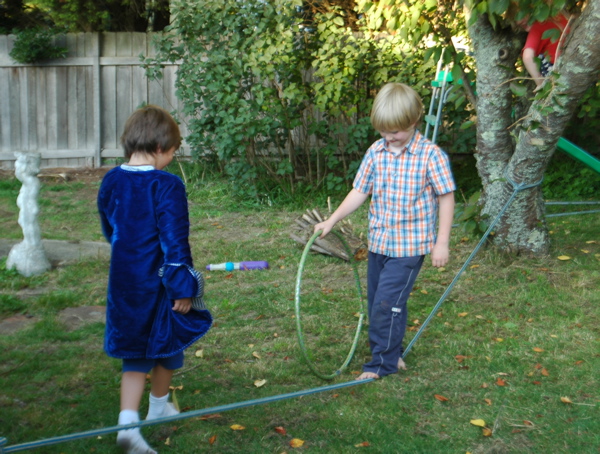