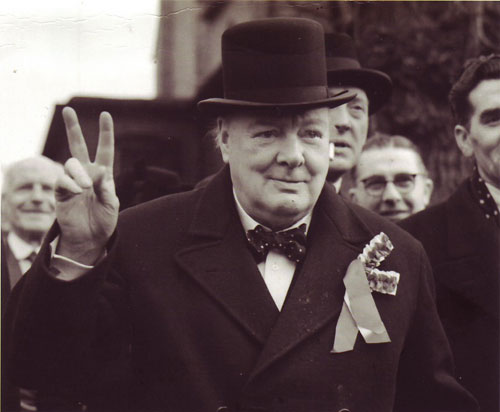 On the 18th April this year I started this blog with Winston Churchill’s quote:

â€œThe era of procrastination, of half-measures, of soothing and baffling expedients, of delays, is coming to its close. In its place we are entering a period of consequences.â€Sir Winston ChurchillNovember 12, 1936

I’ve now been doing one new personal and one political action a day for 55 days but it’s interesting to look back on the actions I’ve chosen to take. Ironically it’s been almost 18 months since I finally grasped the seriousness of climate change. In the 16 months before I started the blog, however, I ran around talking to everyone about global warming but didn’t actually DO that much. The things I did do, but which I procrastinated over for ages, included:

â€¢ changing our electricity account to 100% accredited Greenpower (my money now gets invested in new solar power being built rather than more coal being burnt)â€¢ swapping to energy saving lightbulbs (I was convinced to do this when I read a report by the Union of Concerned Scientists of the US which said that if every household in America changed just one ordinary lightbulb for a compact fluorescent one it would be the equivalent of taking 6.3 million cars off the road – I was stunned)â€¢ switching off anything electrical whenever I could, including all the standby lights at nightâ€¢ starting a fabulous vege garden which has been feeding us all yearâ€¢ generally starting to become aware and reduce my consumptionâ€¢ working on the Cool Ideas for a Hot World puppet festival concept, starting a climate action group, writing weekly green tips for the school newsletter, giving Al Gore slide show presentations; starting the community market and stopping going to McDonalds….

OK, OK, I probably did more than I thought, but most of it was focussed on trying to let everyone know just how serious this situation is.Setting targets with this blog has, however, really started me making the many, many changes that need to be made if I’m to reduce my emissions by 50% as the EU suggests, or 60-90% as the Australian Conservation Foundation suggests. Interestingly, while we

chose the most expensive Greenpower (“Ian, we have to have what’s best for the boys’ future!”) our bills have gone down from last year because we’ve been so much more careful.The trouble is that I HATE CHANGE! Helen observed it the other day when Ian suggested we change over to a better editor for the blog. I nearly became hysterical. Starting a blog was a nightmare. Now I love it, but suggest any changes and I start to panic and seize up inside. As it is, a few years ago Ian had to be like a giant hairy spider in order to drag me kicking and screaming into the “world-wide web”. I like things to stay the same. If it ain’t broke, don’t fix it. I want the future I’d always imagined to stay the same too … but it can’t, unfortunately it IS BROKE. I find that realisation so awful that a big part of me just wants to ignore it and pretend it’s not happening. But I can’t. When you know too much you can’t go back to pretending you don’t… especially if you have little children depending on you to act for their future. Little children who need you to be brave and tackle things you otherwise wouldn’t. So, somehow, I have to deal with change.On the whole I’ve been surprised at how much fun the changes I’ve made have actually been but I’ve also noticed that there are some things I don’t let myself go near – to change them would be far too devastating for me. Like chocolate. I’ve heard little murmurings about chocolate but am so addicted to it that I’ve simply refused to think about it. I pretend it’s nothing really – too small to bother about.Today, at permaculture, where I’d given everyone an earfull about plastics and how bad they are, I got an earfull back about chocolate. Yikes. I am seriously addicted to Cadbury’s Hazelnut Dairy Milk Chocolate. I eat a large block nearly every day. Every time the thought of the aluminium and paper in the packaging crossed my mind I’d momentarily realise I should do something about it but ignored the thought and carried on. I’m not sure if I could keep up this workload without munching on chocolate.I decided to google Cadbury’s and try and find an excuse to keep buying my daily block. Instead I found theEthical Consumer magazine’s online shopper’s guide and in that, Cadbury/Schweppes were given an ethiscore of 7, which is considered to be poor, because Cadbury’s dairy milk chocolate is made with unsustainably farmed palm oil. I decided to keep looking in case that wasn’t too bad?I then found a Friends of the Earth report about Cadbury’s chocolate and palm oil and, oh I wish I’d never started this, it allowed me no room to wriggle and squirm off the path I’d started on. Their Greasy Palms report outlines what can be done to change this.So I guess that’s it then. I’ve just eaten my last bar of Cadbury’s Hazelnut dairy milk chocolate. I quite honestly never, ever thought I’d live to see this day and I’m filled with dread about how I’m going to cope without it. But cope I must, I now know too much to pretend it doesn’t matter. It matters, it really really matters.The other thing that really, really matters is knowing that the paper industry emits the fourth-highest level of carbon dioxide among manufacturers, according to a 2002 study by the American Energy Information Administration. According to Time magazine the industry follows the chemical, petroleum and coal products, and primary metals industries.I’ve always been a notorious collector of pieces of paper. Invitations, flyers, recipe leaflets … anything at all really. Mind you, the price I have to pay is a house full of disorganised piles of them! My second action for the last two days was to put a piece of paper back onto a shop counter. I know this sounds ridiculous but I went back three times to pick up the paper because I was convinced I’d need it to remind me to take the boys to a free juggling class on Saturday at 2pm at the Winter Magic Festival in Katoomba. In my interior battle, needing an action for the blog helped me to walk away from the paper (it continued to beckon me but I was free … yeeha … it now feels so liberating and I have less paper accumulating in the house … that wasn’t so hard after all)

For my political actions I simply clicked on an email, courtesy of the Citizen’s Climate Change campaign, asking the Federal Government to better use the $23 million they are planning to use on advertising campaign. The email rejected the government’s attempts to shift climate responsibility to individuals and not take leadership themselves. Although it didn’t get posted, I also made a comment on Peter Hartcher’s blog in the Herald.