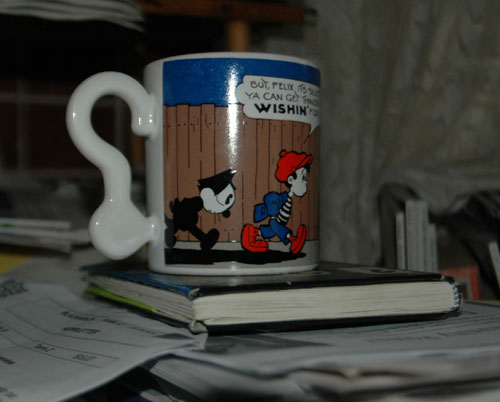 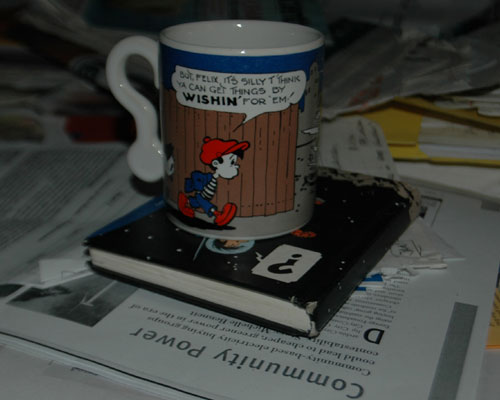 Yesterday I found this old Felix the Cat mug – Felix is wandering behind a little boy with his hands behind his back, his head bent deep in thought, and the little boy is saying, “But Felix, it’s silly t’think ya can get things by wishin’ for em!” The handle of the mug is a question mark. Well, all I can say is, I’m with Felix – I’m thinking and wishing as hard as I can … to find the ways that will help us all act together, and in time to avert some of the worst case scenarios being predicted as a result of global warming and peak oil … Ironically, Felix first went to air in 1928, the year before the Great Depression started … and, with the same sense of foreboding that must have existed before the Depression, I’m aware that we have a lot of work ahead of us if we’re all to change our expectations and our actions.

Today, in The Independent, there was an article about Industry Experts from ExxonMobil, Chevron, ConocoPhillips, Occidental Petroleum, Shell and BP now coming out to say that oil and gas may run short by 2015.

â€œThe world is not running out of energy resources, but many complex challenges could keep the worldâ€™s diverse energy resources from becoming the sufficient, reliable, and economic energy supplies upon which people depend. These challenges are compounded by emerging uncertainties: geopolitical influences on energy development, trade, and security; and increasing constraints on carbon dioxide emissions that could impose changes in future energy use. While risks have always typified the energy business, they are now accumulating and converging in new ways.â€

The Independent goes on to say that we are approaching an unprecedented crisis in which there may not be enough oil and gas produced to keep industrial civilisation running. For this reason it is even more crucial to lobby for renewables now, while we can still afford to make them. The 420 page report called “Facing the Hard Truths about Energy” has been put out by the National Petroleum Council, which includes Lee Raymond, “the recently retired chief executive of ExxonMobil, who led opposition against action to tackle global warming, and became environmentalists’ most prominent bogeyman.” Unlike Felix, he talks about avoiding wishful thinking and recommends tackling our energy future realistically. 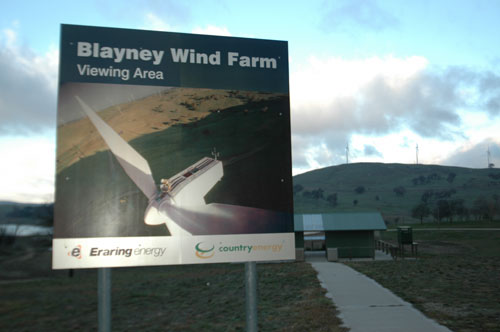 Here’s a novel idea they may not have thought of

The report argues for “an effective global framework” to manage emissions of carbon dioxide â€“ “incorporating all major emitters” â€“ and urges the US to cut the pollution that causes climate change.

Chris Skrebowski, editor of the Energy Institute’s Petroleum Review, said the report’s publication showed the industry “‘fessing up that it really has a problem on its hands”. Until now, he said, “companies, full of share options, have been terrified of frightening the markets” by revealing the truth.

In today’s news our Government has announced that it is pouring a huge amount of money into tackling deforestation in Indonesia … and yet no one talks about reducing the demand for illegally logged timber by reducing our consumption in Australia. At some point everyone will have to admit that it is impossible for the economy to keep growing indefinitely.

Ah well, back to work! Sadly it’s been a whole week since I last posted any actions. I guess the only excuse I can give is that I’ve been juggling too many things, and too many thoughts (not to mention the flu) …. ah yes, I know, the “real world”, not the one I keep “wishin’ for”.

If only I could juggle everything that needs to be done more creatively and in a more inspired way like this performer:

But now for my actions in the last week:

â€¢ One of the things that worries me most about the future is that as resources dwindle and the consequences of peak oil, global warming & our governments’ responses to these become more severe, people’s fears will lead to a self protective isolation and destroy the fabric of our communities. The best way forward is to work cooperatively and so, for the last week, my main political action has been to get together with other creative people to think of as many ideas as possible to strengthen community interaction and the communication networks that exist between groups.

â€¢ I also gave An Inconvenient Truth slide show to the Annual Dinner of the Ag Bureau in Grenfell. Apparently, because America has turned so much production over to corn for ethanol, Australia looks set to get a bumper price for wheat this year … as long as we get enough rain … hopefully this will be some good news at last for Australian farmers. 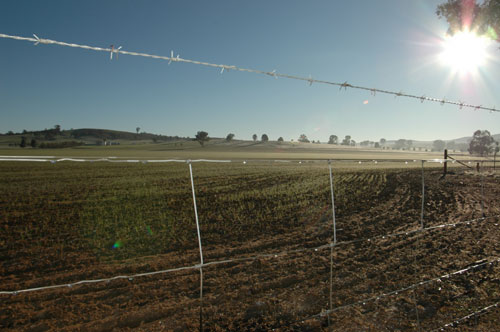 On the way to Grenfell 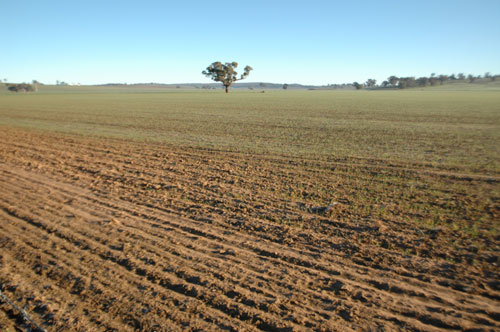 â€¢ Gave another slide show at The Springwood Civic Centre – a wonderful audience, some of whom are already letting me know that they’ve started writing letters calling for action on climate change!

â€¢ Attended a Bike Trail/Multipurpose track meeting at Council – we need to lobby all councillors so that they can see how important the 3m wide track would be to reduce emissions, increase road safety, develop fitness, promote low emission tourism and save everyone money

because of lower fuel costs. NSW is lagging behind the rest of the Country in this regard. According to “Railtrails Australia” the development of Rail Trails in NSW has been hindered by the fact that its disused lines were never ‘closed’. The NSW Department of Lands is pushing for the transfer of some of these disused lines from the State Rail Authority to Crown Land to be managed under the NSW Crown Lands Act. The Recreational Trails Coordinator for the Lands Department is asking NSW groups with a rail trail proposal to contact him to discuss their proposals with the possibility of packaging proposals for closure and transfer. You can email Col.Roberts@lands.nsw.gov.au

I can’t help wishing the tracks had never been closed in the first place.

There’s a book called Rail Trails of Victoria and South Australia, which is already in its 3rd edition and which you can order from here.

â€¢ Clicked on a poll in the SMH to indicate how I’m going to vote! (I know that this doesn’t achieve much but I can’t help myself)

â€¢ Helped do some filming of the wonderful work that Greencorps are doing up at the school – they’re a group of young people who’ve been building a path out of recycled bricks – the bricks are also becoming the borders of the garden beds. They’ve built compost bays and tomorrow they’re starting to make compost. It’s a great way to teach our children about how to create gardens and grow food.

â€¢ Joined the ATA (Alternative Technology Association). They’re a non-profit community group concerned with the promotion and use of appropriate technology. They also publish ReNew magazine (available in most libraries) which features solar, wind, micro-hydro and other renewable energy sources and demonstrates real life applications of these energy sources. It also covers sustainable transportation and housing issues, conservation of resources, recycling and broader environmental issues. The current magazine has an extremely useful article on what to do with halogen downlights. We put some in a few years ago in the workshop and I’ve been regretting it ever since. Now I’m going to tackle them at last.

â€¢ I’ve been trying not to buy anything new but I’ve been worried about using batteries for our torches so I’m ordering a Dynamo Torch from the ATA shop. It’s described as a super-bright LED wind-up torch that will provide light anywhere, anytime, without requiring batteries or an external power source. One minute of winding provides light for up to 30 minutes, and you can switch between one or all three LEDs. I’ll report back on how it goes.

â€¢ I’m also sharing in the glory of Ian finally getting rid of a whole pile of stuff we didn’t need by putting it on Freecycle It was all gone within 24 hours of him posting it … I was stunned that it happened so quickly, but I’m also taking some credit because he couldn’t have done it without me collecting all the stuff in the first place (OK, Ian … I can hear you … stop groaning).

â€¢ Because it has been so very very cold and energy consumption is going through the roof this winter, I’ve gone to bed much earlier all week – dramatically reducing the amount of heating we’ve needed!

â€¢ Also lugged all my gear for the Inconvenient Truth presentation (my data projection unit, computer and speakers) on the train to Springwood. One of the problems is that our public transport system from the Mountains to the Central West in particular, doesn’t run frequently enough for me to be able to get somewhere and back again on the same day, so I’ve always had to drive. At least now, though, I’ve overcome the concern I had that I wouldn’t be able to manage all this gear by myself on the train.

â€¢ Bought a beautiful batch of fruit and nut trees for the garden – an advanced walnut, almond, hazelnuts, redcurrants and blueberries. Am watering at the mouth already imagining the crops we’ll have in a few years’ time. If anyone has any idea where I can get a pistachio tree I’d love to know … can’t find one anywhere!

â€¢ Asked a builder to measure up and draw plans to glass in an open verandah so that it can be a suntrap to warm the house in winter. The doors will concertina open to let cool air in during summer.

Phew … after all that hard work I need a laugh! Here’s Chris Bliss – the juggler you saw earlier, who’s also quite a dab hand at comedy. You may well “laugh so much your sides will ache” … almost as good as watching Felix, the wonderful cat.

5 thoughts on “Getting things by wishin' for em!”