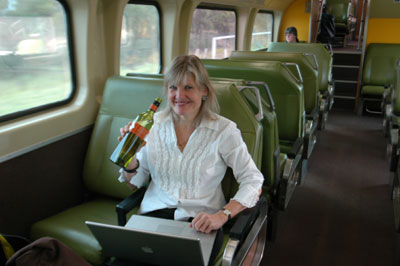 OK, so my new personal action today wasn’t really “very new” in that I HAVE reused glass bottles as drink bottles before, but today was the first time I’ve reused a wine bottle as a water bottle … and all I can say about it, other than that the water tasted very, very nice, was that everywhere I went people noticed!

I caught the train to Sydney for an Australian Conservation Foundation lunch with donors and everyone NOTICED there too. It’s very clear that action is far better than theory … it’s easy to talk about all the things you CAN do, but when you actually start doing them it has far more impact. I have to say too that my wine bottle has been far and away the nicest drinking bottle I’ve ever used. Glass is so much tastier than plastic to drink from, even without thinking about the horrible Bisphenol A that leaches out of plastic, or the petrochemicals that plastic’s made of, or the huge amount of energy required to “recycle” it …

I’m attempting one other personal action too but I can’t report back on how much success I may be having yet. When I finally got home from Sydney I had my first real awareness that I haven’t Chip cialis been wearing deodorant (that’s trying to put it nicely … peeeeooooeeeewwwwwwwwww would be a less nice way of putting it). Sydney being much warmer than Blackheath and with all that running around etc. meant that I may have to start cooking up Helen’s natural deodorant recipe after all …. as soon as I find out what witchhazel is and where you can get it? Looking at (and smelling) my white shirt when I got home I automatically went to throw it into the wash, but then remembered an article about farmers out west who have been so short of water in this drought that they no longer have enough water to wash their clothes. They just hang them out to air. As usual, I stopped in my tracks, surprised again at the mindless squandering of the world’s resources that has so automatically been a part of my life. Throwing things into the wash because they have a tiny spot or a bit of stench about them results in huge amounts of water and electricity being used, more chemicals going into the system etc. Being the chief clothes washer in this house I realised that this was an action I could easily do without incurring yet another marital eco-fight.

There was a tiny speck on my white shirt so I’ve gently washed that off with a washer and soap, and now I’m hanging the shirt out to air. If it works I may well be able to halve the amount of washing I do. I’ve got a sneaking suspicion that my mother used to do this too so, yet again, I’m not really discovering anything new, just unlearning bad habits I’d slipped into.

Like not dusting regularly or looking after our furniture by giving it a weekly “wax and polish as I dust with Mr Sheen.” Inadvertently it’s probably a good thing that I dropped the Mr Sheen. It was the first aerosol cleaning product that helped introduce aerosols to Australia but is no longer considered safe for the environment …

“Perhaps the most significant changes in store for the future of the polish industry are likely to be driven by regulatory concerns. Air pollution legislation is limiting the types of propellants and solvents used in furniture polishes. In the mid-1970s a similar situation occurred in the antiperspirant industry. Safety concerns caused aerosol antiperspirants to almost vanish from the market where they were originally the most popular type. Whether the industry will respond to regulatory challenge with improved aerosol formulations, non-aerosol pump products, or some new delivery system altogether remains to be seen.”

But there’s one Mr Sheen I’d like to see more of in Australia. Mr Martin Sheen who recently appeared as The President in West Wing and is a staunch anti nuclear campaigner. I mentioned this at the ACF luncheon and now have my fingers crossed that someone may be able to invite him here before the election. I think he’d have a huge impact because so many people are confused about nuclear and don’t realise that, apart from all the proliferation and long term waste disposal issues and constant risks of nuclear accidents (how long can I go on …), we simply don’t have time to wait for the nuclear industry to be developed. Also drew everyone’s attention to the fact that we can’t keep saying it’s 10 years to the climate tipping point because, in fact, NASA’s James Hansen made that point 18 months ago. Believing that we’ll always have 10 years is part of the procrastination that is destroying any chance our children have of a liveable future on this planet. We have 8 1/2 years if we’re lucky – but 8 1/2 years is a lot if we start moving ahead at the rate of a Year In A Day.

In terms of political actions I also yacked on to everyone I met on the train and I’m being more political in my blog title today. Discovered as I analysed who’s visiting this site that we appear 3rd on the Google search engine when you type in Katoomba Climate in Autumn … so now I’m going to think a lot more about the type of people I want to attract when I drop those few little words into the title bar!

PS Found this site called Bush or Chimp? when I googled George Bush