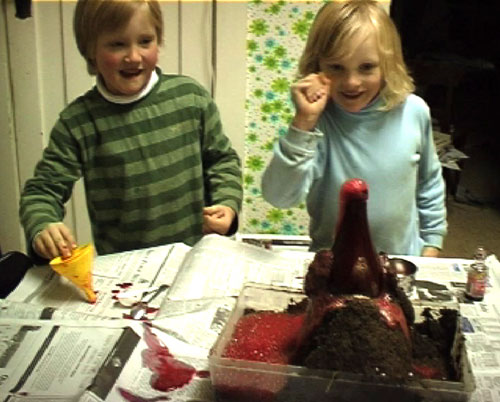 Click here to learn how to build an erupting volcano

Well, it’s the last day of the school holidays and, like our Premier Morris Iemma who also disappeared from duty to be with his family, I’m baaaaaaaaaaaack!

The boys and I decided to finish the holidays “with a bang not a whimper”. Last night we added to the world’s greenhouse emissions by building an erupting volcano – a sort of sendup of whether carbon dioxide is manmade or natural! After being in the ABC’s audience for “The Great Global Warming Swindle”, which denies that global warming is caused by CO2, I decided that the greatest political act I could do for the world was to encourage my boys to love, respect and understand “real” science! I still feel disappointed that the ABC stooped so low as to become part of “The Swindle” – a programme which I wrote about on my 24th May blog. Its discrepancies keep being edited out or changed as people draw attention to them – like Martin Durkin’s claim that volcanoes produce more CO2 than human activities. In fact, the lower limit for global subaerial volcanic degassing of carbon dioxide is 300 million tonnes per year. By comparison, scientists at the Carbon Dioxide Information Center, Oak Ridge laboratory, estimated that 26,778 million tonnes of carbon dioxide were emitted by human use of fossil fuels in 2003. Carbon dioxide emissions from volcanoes, therefore, amount to less than 2 per cent of the annual emissions of carbon dioxide from human use of fossil fuels.

I also feel disappointed that so many of the selected audience were members of the Citizens Electoral Council (I know, I was sitting in between them!) How could that even be remotely representative of our society? – so much for balanced journalism. Cam Smith, an anti-hate campaigner, wrote a review of this rent-a-crowd in Crikey:

One audience member went the climate change believers for relying on methodology “disproved 400 years ago” while three others accused them of running a secret Eugenics agenda. “This is Hitler’s Nazi race science!” yelled one.

The CEC was originally an electoral front for the Australian League of Rights (increasingly elderly “patriots” largely concerned with Holocaust denial and Jewish conspiracies), until it was stacked by local followers of Lyndon Larouche and disagreements over the status of the Queen (ALOR loved her, the Larouchites reckon she runs an international drug empire) forced a split.

Since then, the CEC has spent most of their time losing elections (badly) and raising money (and lots of it).

The CEC is especially dark on the idea of man-made climate change. It is, they say, a fraud perpetrated by agents of the British Crown who wish to kill off billions of people. Why? Because they’re the British, you fool! They’re evil — it’s what they do!

The Larouchites much prefer the theories put forward by Swindle, because it shifts the danger from the consequences of man-made global warming, which are difficult to fight, to the dangers of genocidal global warming proponents, who can be defeated with the stroke of a pen.

So why did it seem like the audience was loaded with Larouchites?

The ABC told Crikey that viewers who contacted the station to congratulate or complain in the lead-up to the airing of the documentary were invited to apply to participate in the studio audience. A balanced mix of believers and sceptics were then selected. The ABC estimates there were around five members of the CEC in the audience of 80.

According to the Larouchites, there were 18 — three of whom were kicked out prior to the show for being “potentially disruptive”. Four of the remaining members asked questions.

Blogs are an important way of countering the sort of rubbish that the ABC chose to screen.
My personal action last Thursday when I went down to the ABC, and one of the easiest ones I’ve done yet, was to choose to have dinner at the Agincourt Hotel – it markets itself as “the first truly carbon neutral hotel in Australia”. 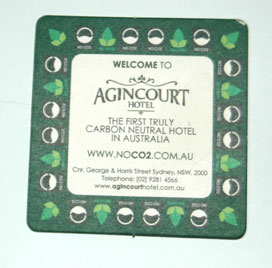 And now to quickly catch up on all the actions I’ve taken in the last week.

Monday 9th – Instead of buying lollies for the boys as a treat I bought them some fresh sugarcanes at the Maleny Co-op – none of us had ever tasted natural sugar out of a cane before so we all enjoyed it – and we walked away cane in hand with no packaging; Celebrated NAIDOC week (National Aborigines and Islanders Day Observance Committee) by learning about the Bunya tree as a source of bushtucker (a talk at Maleny Library) and the boys spent time exploring a new library (instead of a MacDonalds!); Being in Queensland on holiday with limited access for political action I voted on every global warming poll I could find on the web.

Tuesday 10th – My mother asked me for help to remove one of those fold-down couch beds because its folding mechanism had broken. Although I’m not generally a fix-it type of person, I decided I couldn’t bear a whole couch becoming redundant so fiddled with the mechanism and surprisingly got it working (really impressed myself) – one less couch in landfill, and one less needing to be manufactured to replace it.

This was also the day we flew home from Queensland and, while I couldn’t reverse the fact that we were flying, we did at least keep and take back the ear plug headphones that we’d received on the way up; reused them on the homeward trip. I also acted on Josephine’s tip about serviettes and said no to them wherever I could – they came with absolutely everything on the plane. Decided that actively saying no to each waiter and shop assistant all day was a form of political action.

Wednesday 11th July – On the political front I was interviewed by a student from Lithgow High doing an assignment on Global Warming and What Young People Can Do. I also started researching composting toilets but came to the conclusion that it’s probably too difficult (mainly because it’s so cold in Blackheath) to install them here. The boys went to a birthday party and instead of buying wrapping paper we used some white paper I had on a roll from reverse garbage and they decorated it … much nicer and more personal. I’m going to try to never buy new

wrapping paper again if I can. You can wrap presents using all sorts of things like old maps, magazines & newspapers, old scarves ….

Friday 13th – We held our comedy fundraiser “Conference for sole traders” at the Golf Club to raise funds for solar panels for the school. It was a great night. I also met with a Climate Action Now member to do some planning; made the next stage of my sour dough bread; met with the filmmakers again; and read on Grist that it’s better not to put a brick in your toilet because they disintegrate … a plastic bag is better

Saturday 14th – Talked to one of the people who came to the show last night and they wondered if they could offset their travel by donating money to the school for our solar panel. Liked the idea but will continue to research this as a possibility. On the personal front I decided that while I can I’ll stop buying tomatoes in cans and either use all the ones I’ve frozen or bottled or buy them fresh.

Sunday 15th – Continued the long saga of making the sourdough bread and made cupcakes for the boys. They were really keen to have hundreds & thousands on them so, given the choice at the local shop, I bought a very large container rather than small ones that cost more and used more wrapping. 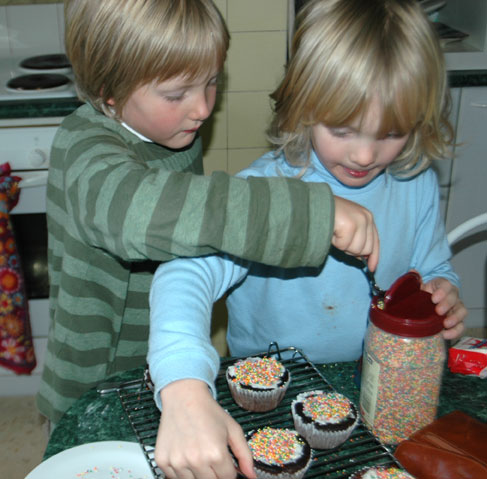 Made and edited the video of the boys building their volcano. Thought about what an important political tool filmmaking can be – especially in an era when I can no longer even trust the ABC. Have begun to plan lots of short films that can be used to educate about global warming. My personal action was to make a pact to no longer buy from Woollies or Coles (except for emergencies) – apparently Woollies is currently trying to squeeze Coles out of the market – it may well be possible that in the future one single company could have control of the bulk of Australia’s fresh food distribution. Well they certainly won’t have control of my bread production. 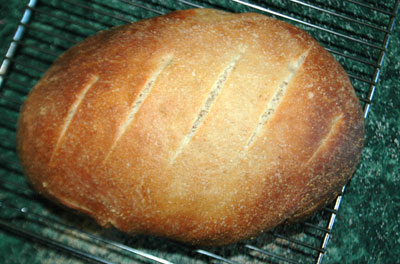 This is my final loaf of sourdough … it was absolutely delicious. Today we finished and ate it and I spent the day hatching plans and trying to contact politicians about an initiative to get Blackheath to become even “greener”.