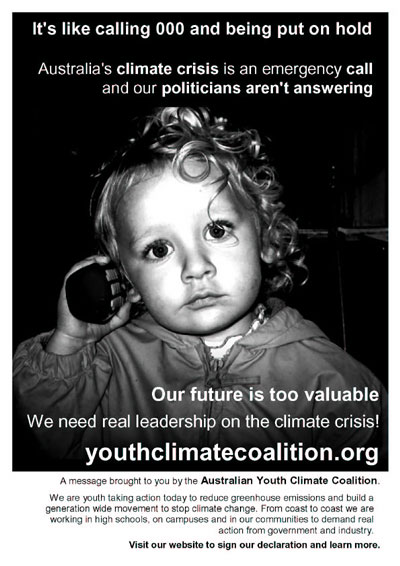 Today I spent the day away from the computer (I got my wish!) attending gatherings of people from every part of the community wanting action on Climate Change. The first was a huge community consultation organised by Blue Mountains City Council which is part of The Cities For Climate Protection Programme.

It was to review the 25 Year Vision for the City – Towards a Sustainable Blue Mountains. What came out loud and clear was that the need to act is even more urgent now and that the gap between rich and poor is getting greater.

With that in mind, it is shameful to see the amount of money being spent by Government to perpetrate fear about terrorism rather than to help us reduce poverty and our dependence on oil which is at the root cause of so much of the terrorism. If you look at this quarter page ad in our local paper it is ironic that the terrorism ad is so big while the St Vincent de Paul Society only has a tiny little strip ad above. It clearly illustrates the priorities of our current leadership … from whom it is our responsibility to demand more! 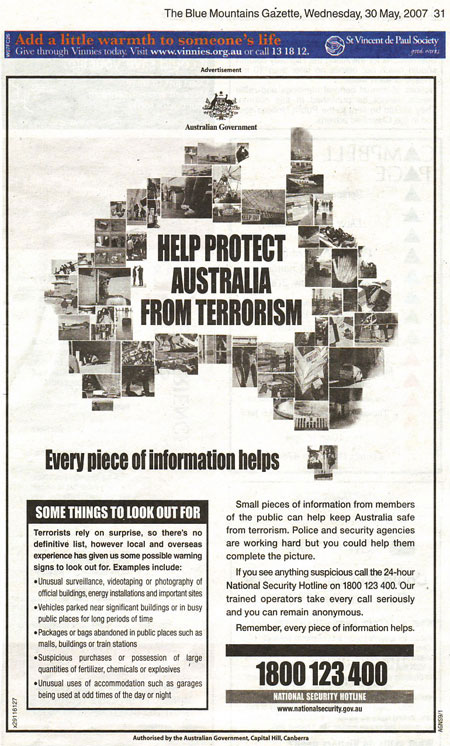 At the BMCC meeting I met one of our blog’s subscribers who told me that she and another of our subscribers are part of a new Katoomba branch of The Compact. (Check our our blog for May 28). Yeeha!

At the meeting I also sat next to Anne Elliot, another of our subscribers, and one of the most active Envirotarts in our region (this is a compliment Anne and meant to be a food pun?!) …. she heads the Slow Food Movement in the Blue Mountains which has just been awarded Cittaslow Accreditation – along with Goolma, the first in the Southern Hemisphere. Click on the links I’ve highlighted to see the many things that Slow Food is involved in, including promoting the establishment of a Kitchen Garden in every home. 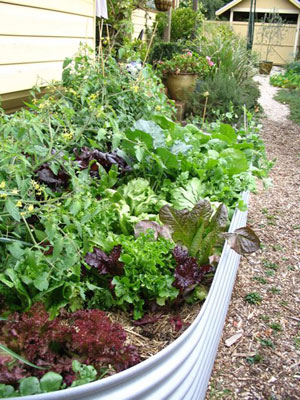 At our Community Market at the Blackheath Public School Hall this Sunday we’ll be celebrating World Environment Day and lots of other local groups will be having stalls and information. We’ll also have the postcard of my favourite poster for sale which fits in beautifully with the Slow Food goals:

Nada, affectionately referred to in Helen’s blog as “completely bonkers” is yet another of our wonderful subscribers. She’s a Blackheath resident and is bravely taking on the 90% Reduction Challenge to reduce personal Greenhouse emissions.

Envirowoman in Canada is our hero and, we are very proud of this, another one of our subscribers! She’s an Investment Banker by day and a mad crazy superhero fighting a neverending battle against plastic by night! (probably all day and night actually)

But back to all my meetings yesterday. I drove slowly home from the meeting in Lawson, hugged the boys, jumped into the batmobile (aptly being renamed the slug mobile) and headed off for the inaugural meeting of a new Katoomba/Leura Climate Action Group that grew out of the Climate Change, Despair and Empowerment Roadshow. (See my blog for April 22) 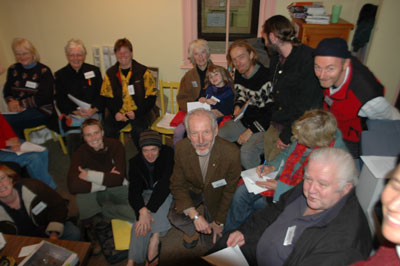 So many people turned up that they could barely squeeze into the room and I certainly couldn’t squeeze them all into the photo. One of those who didn’t get into the image is Natalie – another local hero involved with Friends of the Earth and working tirelessly to effect change. Hooray, she’s joined our blog too! Is it time for a party yet?

All of this local activity, of which this is only a small segment, confirms for me what I’ve read in this excerpt from a very inspiring article by Paul Hawken:

This unnamed movement’s big contribution is the absence of one big idea; in its stead it offers thousands of practical and useful ideas. In place of isms are processes, concerns, and compassion. The movement demonstrates a pliable, resonant, and generous side of humanity.

And it is impossible to pin down. Generalities are largely inaccurate. It is nonviolent, and grassroots; it has no bombs, armies, or helicopters. A charismatic male vertebrate is not in charge. The movement does not agree on everything nor will it ever, because that would be an ideology. But it shares a basic set of fundamental understandings about the Earth, how it functions, and the necessity of fairness and equity for all people partaking of the planet’s life-giving systems.

appear to be insoluble dilemmas: poverty, global climate change, terrorism, ecological degradation, polarization of income, loss of culture. It is not burdened with a syndrome of trying to save the world; it is trying to remake the world.

There is fierceness here. There is no other explanation for the raw courage and heart seen over and again in the people who march, speak, create, resist, and build. It is the fierceness of what it means to know we are human and want to survive.

This movement is relentless and unafraid. It cannot be mollified, pacified, or suppressed. There can be no Berlin Wall moment, no treaty-signing, no morning to awaken when the superpowers agree to stand down. The movement will continue to take myriad forms. It will not rest. There will be no Marx, Alexander, or Kennedy. No book can explain it, no person can represent it, no words can encompass it, because the movement is the breathing, sentient testament of the living world.

And I believe it will prevail. I don’t mean defeat, conquer, or cause harm to someone else. And I don’t tender the claim in an oracular sense. I mean the thinking that informs the movement’s goal — to create a just society conducive to life on Earth — will reign. It will soon suffuse and permeate most institutions. But before then, it will change a sufficient number of people so as to begin the reversal of centuries of frenzied self-destruction.

Inspiration is not garnered from litanies of what is flawed; it resides in humanity’s willingness to restore, redress, reform, recover, reimagine, and reconsider. Healing the wounds of the Earth and its people does not require saintliness or a political party. It is not a liberal or conservative activity. It is a sacred act.

So now, in the face of all this amazing action, I am almost too embarrassed to list my new personal action for today. I was so busy attending and driving slowly between meetings, that the only thing I could think of to do was to keep reusing my cup at the BMCC meeting in Lawson. I realised that we’re all in the habit of picking up a clean cup for morning tea, another clean cup at lunch and another clean cup for afternoon tea. This obviously results in lots of washing (water + electricity). Of course my action, in such a large gathering, would have made no difference whatsoever, but for me it was part of my own personal changing of wasteful habits. My political action was just becoming part of this rising wave of action in the community.

2 thoughts on “Envirowarriors young and old, are rising from their slumber & gathering their forces”