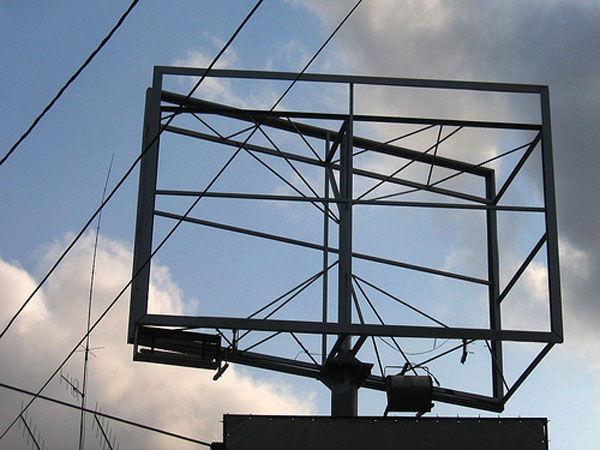 Well, I never thought I’d live to see the day, but this year Sao Paulo, the world’s fourth largest metropolis, has actually banned outdoor advertising and, it seems, Beijing is starting to do the same. This is an excerpt from an article in Adbusters :

Known on one hand for being the countryâ€™s slick commercial capital and on the other for its extreme gang violence and crushing poverty, SÃ£o Pauloâ€™s â€œLei Cidade Limpaâ€ or Clean City Law was an unexpected success, owing largely to the singular determination of the cityâ€™s conservative mayor, Gilberto Kassab.

As the driving force behind the measure, mayor Kassab quelled the rebellion from the advertising industry with the help of key allies amongst the cityâ€™s elite. On many occasions, Kassab made the point that he has nothing against advertising in and of itself, but rather with its excess. He explained, â€œThe Clean City Law came from a necessity to combat pollution . . . pollution of water, sound, air, and the visual. We decided that we should start combating pollution with the most conspicuous sector â€“ visual pollution.â€

Since then, billboards, outdoor video screens and ads on buses have been eliminated at breakneck speed. Even pamphleteering in public spaces has been made illegal, and strict new regulations have drastically reduced the allowable size of storefront signage. Nearly $8 million in fines were issued to cleanse SÃ£o Paulo of the blight on its landscape.

… surveys indicate that the measure is extremely popular with the cityâ€™s residents, with more than 70 percent approval. 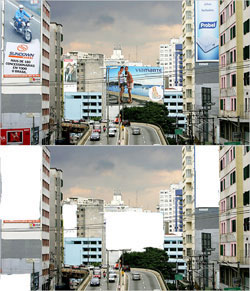 Most interesting. The Wall Street Journal’s recent July 25th article “Beijing Mystery: What’s Happening to the Billboards?” by Jason Leow talks about how the Beijing government is aggressively tearing down all their outdoor billboards and advertising. Most of the ads focus on luxury goods like expensive cars and $6 million villas in suburbs outside the city … Even advertising for the Olympics is impacted. The article quoted mayor Qishan saying “‘Many [billboards] use exaggerated terms that encourage luxury and self-indulgence which are beyond the reach of low-income groups and are therefore not conductive to harmony in the capital'” … and it also quoted China’s Premier Wen Jiabao as saying that builders should “‘focus on developing reasonably priced commercial housing for ordinary people'” and that he thinks “the American economic model will not suit China.” In fact, the Chinese government has already “clamped down on new land approvals and funding for fancy government buildings.” The article explained that the city will restrict billboards and disallow them from having a presence inside the Fifth Ring Road. A video media advertising company with 100,000 video screens inside buildings and spaces around the city said their sales were up 75% in the first quarter of 2007, and they think the decrease in billboards has had a positive impact on their game. (Matthew Waxman, June 30)

Back home in Blackheath I’ve continued to be one of those people who loves to dig in the garden without gloves. I’ve always loved digging in the dirt and never really minded the battering it’s given my hands … until the other night when one of my cuts became infected ….eeeerrrrggggghhhhhh. For the first time I sidestepped Dettol and commercial antibiotic ointments and decided to use a natural antiseptic – Calendula. 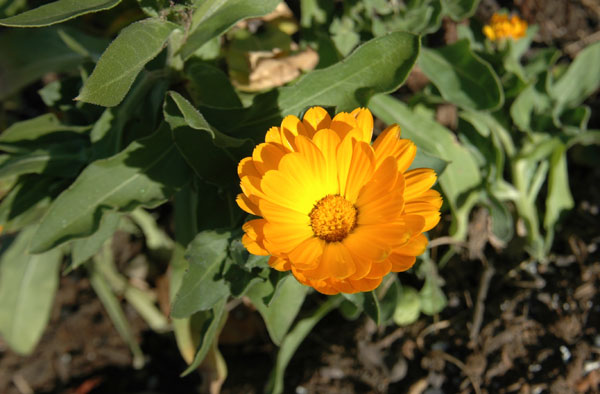 I had some drops that a herbalist friend, Penny, had given me so I diluted them with water and soaked my finger in the solution. Last night my finger was completely swollen and burning with the infection – this morning the wound was almost completely healed and all the infection was gone! I was stunned. A beautiful flower for the garden and the medicine chest.

To make your own calendula oil, soak fresh flowers in vegetable oil for about three days (you can put it out in the sun for a while too), then strain the liquid before bottling it.

Because my flu flared up badly (I’ve had it for 6 weeks now) I spent yesterday resting and drinking juices and an immune boost tea that someone gave me. The tea is absolutely delicious and this morning I felt substantially better. It’s a mixture of Echinacea, lemon thyme, rosehips, yarrow, elderflower and ginger. I’ve checked on the web and other immune boost teas include lemongrass, hibiscus, orange and lemon peel, camomile flowers and peppermint.

I’m going to make sure I have as many of these things as possible in the garden. I’ve also always wanted a use for the orange and lemon peels that can’t go into the compost or the worm farm so I’m now going to start drying them to include in tea.

to give another presentation of the Inconvenient Truth slideshow to the P&F at Blue Mountains Grammar and I’ve also been writing letters to the paper.

2 thoughts on “Could the tide really be turning?”