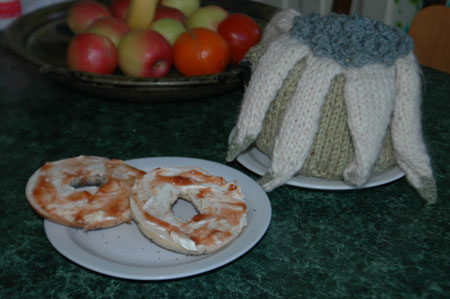 This is the mad crazy tea cosy that my friend Barbara made. It is a giant woollen flannel flower and I’m falling more in love with it day by day. Until this blog I’d never used teapots and teacosies, but today I was blown out to discover that, even in this icy weather, my pot of tea stayed hot enough for two hours! I was stunned and amazed. I just kept pouring myself top-ups and didn’t need to boil the kettle or use the microwave once. Now that’s an energy saving.

Inspired by the link from Nada a few days ago I also rang Trade Winds and ordered bulk packs of certified fairtrade and organic tea and East Timorese coffee. Certified FAIRTRADE products guarantee a higher return to the grower and assist the equalisation of trading disparities between the developed world & transnational traders, and the poorer producing countries. Speaking with the staff there I also discovered that Trade Winds are the only Australian organisation to ensure that their products are actually packed in their country of origin – giving the poorer countries maximum income. In terms of carbon emissions, buying bulk helps reduce packaging and handling and provides support, now, to those people who will suffer most from global warming because of their poverty.

Because I reluctantly had to spend the whole day working at the computer I decided to start being more energy efficient in how I use it. Firstly I’ve switched on the energy saver in the control panels so that the screen dims soon after I stop using it. I’m lucky that I have a laptop because they use the least energy but I also kept an eye on the battery all day. As soon as it was fully charged I unplugged the computer until the battery went flat again. This gave me the equivalent of the 6 – 8 hours I’ve committed to staying off the computer every day (at least in terms of energy savings).

It’s hard because the computer has become a bit of an addiction.

Speaking of addictions, every now and then I’m rather like a recovering alcoholic. I forget how serious the implications of my addiction are and just want to let me hair down like I did “in the old days”. I just want to be spontaneous and follow my feelings instead of worrying about every single thing that I do and feeling responsible for every single action. I just want to have fun.That happened yesterday, unexpectedly. I’d asked a friend of ours, who’s a builder, to come around and give us advice on replacing the roof of our garage so that we could eventually collect clean drinking water off it. Before I knew it we were discussing the possibility of ripping off the back of the house so that we could move the kitchen and create a new indoor/outdoor living area. One with lots of sun. I got really excited about getting a new gourmet gas stove and beautiful big glass windows and a deck and … and … and ….

Of course, global warming aside, letting my hair down and going wild with all these possibilities is not necessarily a recipe for happiness. While it would, of course, be lovely to have a fabulous new kitchen and living area, there is always a price to pay for everything. The price would have been an $80,000 debt (not to mention all the additional emissions associated with building a new room). An $80,000 debt would have required earning more money and being too busy to do anything about global warming and, suddenly, before I knew it, I would have traded my children’s future for immediate and short term comfort. Would they have thanked me for this?

My thinking here is not to criticise new building projects (I’ve done my share of extensions in the past), or being in debt (I had to go through debt to get my home too) but to recognise that sometimes we get sucked into things that we don’t really need. It would be “nice” to put an addition on the house, but when the world is in a state of emergency, and when our home is perfectly adequate the way it is, a new kitchen/living area is not exactly necessary for us. Would I have even remotely considered putting on a new kitchen if I were living in the middle of World War 2? Most scientists are saying that what we are facing now is worse than any War the world has ever experienced. Perhaps it is time to start thinking differently and establishing real priorities.

I pulled myself together and decided against the new rooms. We can make do with what we have.

Interestingly, in the last year and a half, I’ve been on a sort of consumption descent. There are ways to do it that aren’t too painful. I started off by still buying things, but making sure they were re-using or recycling objects that would otherwise have gone into landfill. They were much better for the environment, too, because they didn’t require manufacturing new materials and all the energy that goes with that. Most of all I loved their ingenuity and so did everyone else who saw them.

One example of adaptive reuse that I found inspiring was this Secco bowl made from an old washing machine drum. 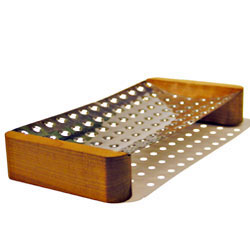 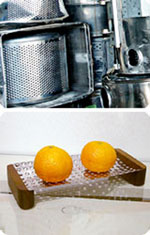 I’m thrilled that one of my favourite blogs is up and running again after a short break. Adaptive Reuse is one of the most inspiring blogs I’ve ever found and also the first blog I ever looked at.

Reuse and recycling has really taken off in the UK where they have a fabulous directory of recycled products and it has become fashionable to swap till you drop.

Actually I’m no longer interested in buying anything unless I really need it which,

all things considered, hasn’t taken long at all. Every time I say no to a purchase I feel as though I’m buying time – time for myself and time for the planet.

On the political front I sent Senator Natasha Stott-Despoja an email expressing my concern about global warming and the government’s failure to act.

I also put a comment on the Online Opionion blog and used the Greens Website site that Jeremy recommended for sending letters to the media to say that the biggest election issue is not the economy (we’re in a giant resources boom) or workplaces it’s the Climate.

Today I also received a letter in reply to the email I sent via the Nature Conservation Councilâ€™s website last week:

Dear Ms BastianThank you for your email to the ABC Board regarding the controversial documentary ‘The Great Global Warming Swindle’, acquired by the ABC and scheduled for broadcast on 12 July 2007. The Chairman has asked me to respond on his behalf.

It is important to note that the ABC has not acquired the original version of ‘The Great Global Warming Swindle’ originally broadcast on Channel 4 in the UK. The filmmaker, Martin Durkin, has edited a new 60-minute international version of the documentary, which no longer includes some of the most heavily criticised content of the original program. The contributions of Professor Carl Wunsch are not included in the 60-minute version the ABC will broadcast.

ABC Television has assessed the program and considers that it complies with the ABC’s Editorial Policies and Code of Practice. Nonetheless, please be assured that your concerns regarding ‘The Great Global Warming Swindle’ are noted and have been conveyed to ABC Television management.

Following broadcast, should you have specific concerns regarding the content of the program, please lodge a complaint via our online form and Audience and Consumer Affairs will investigate your concerns accordingly: http://abc.net.au/contact/. ABC Audience and Consumer Affairs is responsible for the independent investigation of complaints alleging breaches of the Editorial Policies or Code of Practice for programs which have been broadcast.

You may be interested to note that following the broadcast of ‘The Great Global Warming Swindle’ at 8.30pm on 12 July, ABC TV will present an hour-long debate on the issues raised in the program. Following this, ABC Online will host a forum to enable the public to voice their opinions and share their feedback on the program.

You can read an ABC TV Media Release about the program at the following link – http://abc.net.au/corp/pubs/media/s1953927.htm

Thank you again for writing to the ABC.