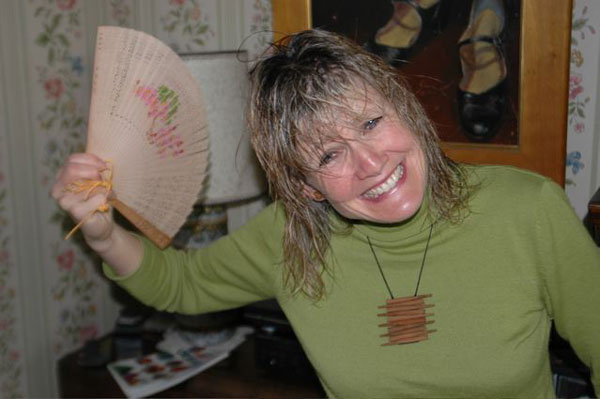 Somehow I don’t think drying hair manually with a fan will take on in the hairdressing salons of the world! Ian’s response: “For godsake get a hairdrier!” I take your point Paula (comment on April 27) but I’m still inspired by The Compact and their desire to find ways to avoid buying anything new if they can. They’ve just celebrated their anniversary and apparently now have over 8000 people around the world who’ve joined them. There’s an Australian group too called “No More Stuff”.

I had to rummage in the bin for our milk cartons this morning. It seems to be taking Ian

a long time to “get” the idea of recycling but, then again, I only “got” the milk carton idea this week myself. Because it’s apparently better to reuse than to recycle (a huge amount of energy actually goes into recycling) I’m using all my milk cartons to plant seeds in and today I used my first two to start my indoor seedraising project over winter. 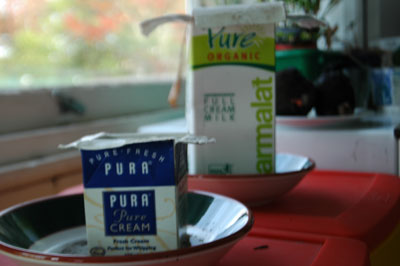 I’ve never attempted to grow anything over winter before – especially not in “Bleakheath”! This year however I’m giving it a shot. I’ve managed to get my broccoli and brussel sprouts established before the first frost, I’ve planted broadbean, coriander and salad green seeds and this morning my first Massey Gem pea shoots appeared in the old potato bed. I’ve planted more pea seeds in the milk cartons just in case these outdoor ones don’t pull through. 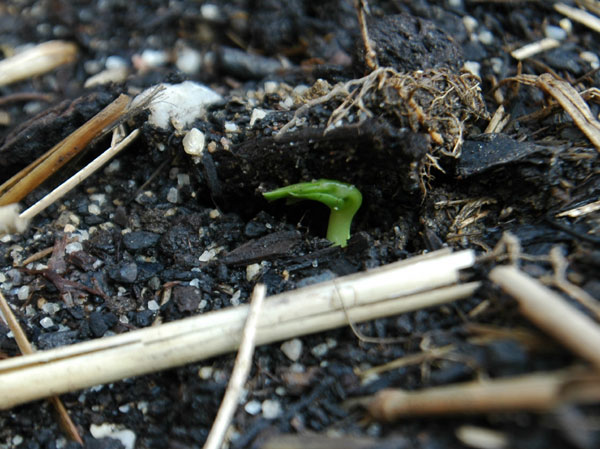 What incredible power in one small seed. No matter how many times I see it, a seed germinating is miraculous and fills me with hope for the strength and tenacity of nature. 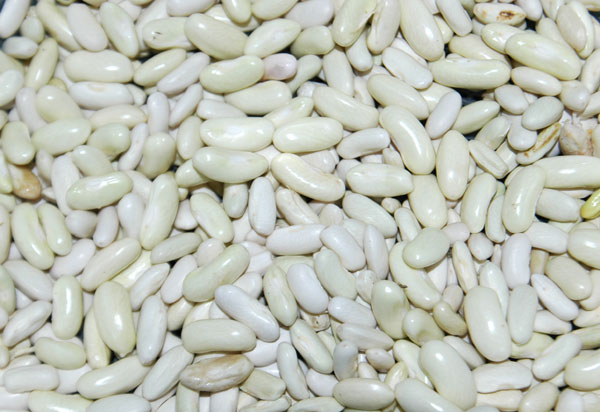 These are the bean seeds that I’ve harvested and hope to use for next year’s beans. 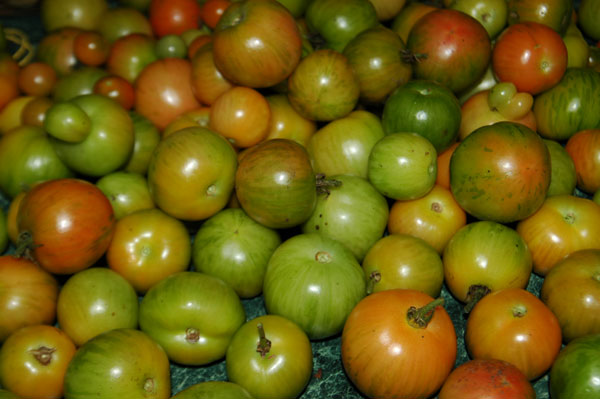 And these are even more tomatoes that I’ve harvested today. Have just cooked these up into a spicy mustardy green tomato relish, adapted from Stephanie Alexander’s The Cook’s Companion – just used the tomatoes that split in the rain this week and am going to try to ripen all the others.

Place all ingredients except cornflour in a large stockpot. Brint to a boil, then lower heat and cook, uncovered, for 1 1/4 hours. Mix cornflour to a cream with a little water. Remove a ladleful of hot liquid from pot and add to cornflour. Stir, then quickly add mixture to pot, giving it a good stir, so that liquid thickens evenly. Cook for 15 minutes, then spoon into hot, sterilised jars and seal at once. Makes 1 litre.

I must say all this cooking and harvesting is extremely enjoyable and I can’t wait to eat more of it. 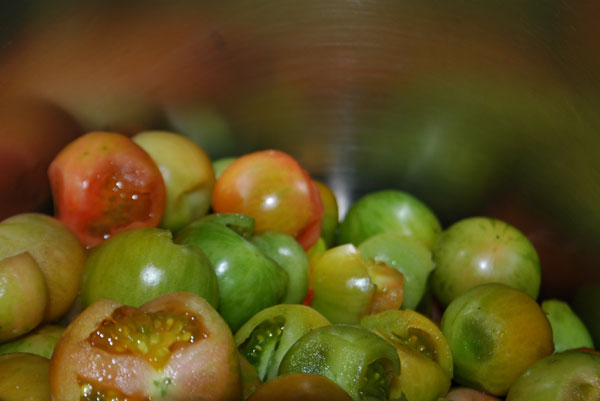 I hit a bit of a brick wall with my political actions today. Rang around over a dozen people but almost everyone is busy at the time of our event in Springwood tomorrow. I had to drag myself out of the garden and kitchen to make the calls and the lack of response made me feel so despondent that I spent the rest of the night cooking.

Was immediately cheered up not long after when I read Helen’s first blogs – Yeeha … we’re doing it … we’re changing the direction of the world by changing our own actions. In the Christian religion Jesus said to his disciples “Wherever two or more are gathered in my name, there I am.” The place we want this world to become is starting right here now in what we’re choosing to do, and in the fact that we’ve chosen to work together to do it. There might be Power in One but there’s a helluva lot more Power in Two … and a lot more fun.