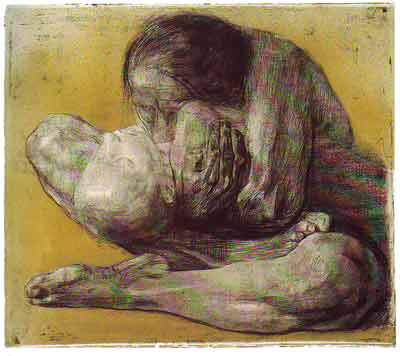 In 1870, Julia Ward Howe, with memories of the Civil War fresh and thoughts of the ongoing Franco-Prussian war heavy on her mind wrote:

while the war was still in progress … the question forced itself upon me, â€˜Why do not the mothers of mankind interfere in these matters, to prevent the waste of that human life of which they alone bear and know the cost?â€™ I had never thought of this before. The august dignity of motherhood and its terrible responsibilities now appeared to me in a new aspect, and I could think of no better way of expressing my sense of these than that of sending forth an appeal to womanhood throughout the world, which I then and there composed.â€

Appeal To Womanhood Throughout The World

Again, in the sight of the Christian world, have the skill and power of two great nations exhausted themselves in mutual murder. Again have the sacred questions of international justice been committed to the fatal mediation of military weapons. In this day of progress, in this century of light, the ambition of rulers has been allowed to barter the dear interests of domestic life for the bloody exchanges of the battle-field. Thus men have done. Thus men will do. But women need no longer be made a party to proceedings which fill the globe with grief and horror. Despite the assumptions of physical force, the mother has a sacred and commanding word to say to the sons who owe their life to her suffering. That word should now be heard, and answered to as never before.

Arise, then, Christian women of this day! Arise, all women who have hearts, whether your baptism be that of water or of tears! Say firmly: â€œWe will not have great questions decided by irrelevant agencies. Our husbands shall not come to us, reeking with carnage, for caresses and applause. Our sons shall not be taken from us to unlearn all that we have been able to teach them of charity, mercy and patience. We, women of one country, will be too tender of those of another country, to allow our sons to be trained to injure theirs.â€ From the bosom of the devastated earth a voice goes up with our own. It says: â€œDisarm, disarm! The sword of murder is not the balance of justice.â€

Howe later went on to suggest a Festival for Peace in America to be called Mother’s Day.

I do not want my precious little boys to grow up to be war fodder or to grow up thinking it is OK to kill other human beings.

The more time I spend with Maxie and Oscar the more I love them … and the angrier I get at the “irrelevant agencies” using up their inheritance. How dare they not take the future of my precious little boys into account. 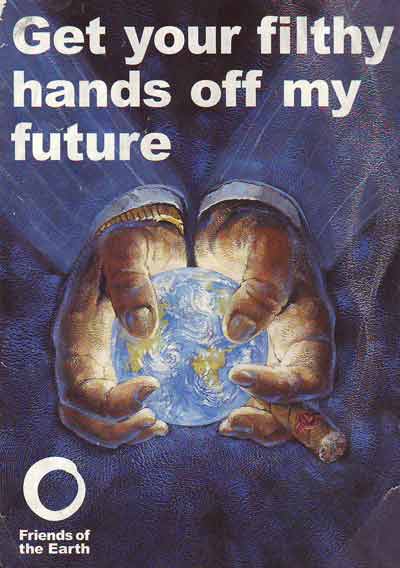 After my breakfast in bed we all went for a walk together up to the Growers’ Market and while Oscar and I selected vegetable seedlings, Maxie filled a punnet with little flower seedlings. A friendly photographer working on a magazine article about the markets took a photo of him and emailed it to me: 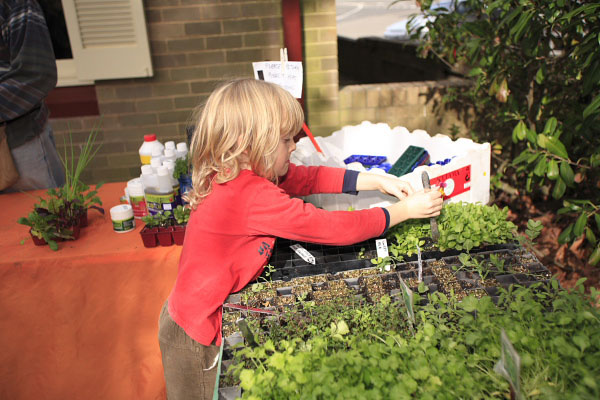 The boys were as excited about Mother’s Day as if it were their own Birthday, and Maxie kept leaping out from behind trees all the way to the market singing Happy Mother’s Day to me – their excitement and joy was infectious. Trees played a big part in their play all morning, like our beautiful white flowering camellia: 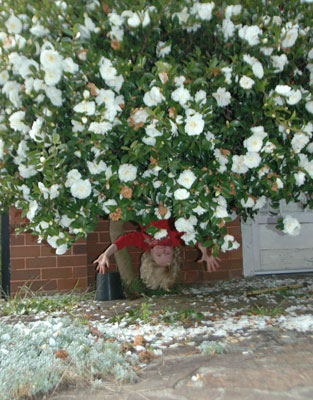 and the lovely tree on the roadside which Oscar seemed to perfectly camouflage with (hopefully not a premonition …) : 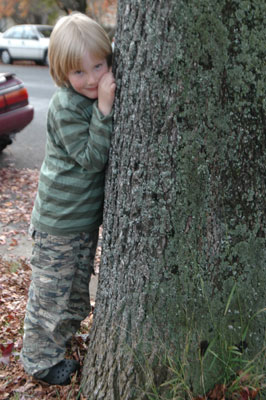 remembering my mother and grandmother and the way they taught me to live. It’s strange how much of that life I’d let slip away. Now I’m trying to relearn it all. Trying to get “less busy” and, paradoxically, finding my life far richer for it.

Mind you, I’ve always started off with the best of intentions. Like once, many years ago, when I bought a stock pot. I’ve used it a lot – but never to make stock. It was always more “convenient” to just buy ready-made stock. Damnation and fury, Al Gore has a lot to answer for. As soon as I hear the word “convenient” I start to panic because I know it’s probably going to be something else I need to change. And stock HAS turned out to be something I needed to reconsider. It had become very “convenient” for me to buy those faux fresh stocks that come in tetrapaks – saltier than buying a “real stock” from the deli but way better than the stock cubes my mum used when I was growing up … as well as cheaper and more “convenient” than fresh stock because they’re able to sit in the cupboard indefinitely until required. The hitch came when I started looking into recycling and discovered that tetrapaks are quite a problem because they’re a mixture of cardboard, plastic and aluminium. Suddenly I had to rethink.

Well today my new action was to make a vegetable stock, with whatever I had at hand, and then to use old icecream containers to store it in the freezer … thereby preventing a tetrapak from being made and also reusing another container that could have ended up in landfill. Not to mention using up veges that were teetering on the brink of being composted. I was immediately rewarded with the most delicious smell and couldn’t believe that I’d reached 47 years of age before experiencing it. Now I also have 4 beautiful containers of stock ready for my next soup or risotto.

The kids are finding it rather bizarre that I’m suddenly always in the kitchen (I mean REALLY bizarre) but they’re gradually getting used to it and seem glad to be able to drop in and show me things while I chop and stir. 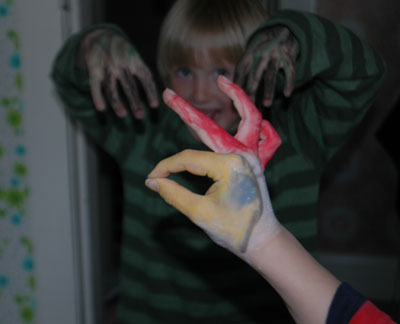 My political action for today was to attend our Blackheath Climate Action Now group meeting – a great group of people who really do fill me with hope. Each one of them is completely committed to doing the something that they can do… and together we’re starting to achieve a huge amount. We’ve agreed to go to shopping centres next Saturday to sign people up for lightbulbs and our Give Your School A Solar Panel Project.

1 thought on “Arise all women who have hearts!”