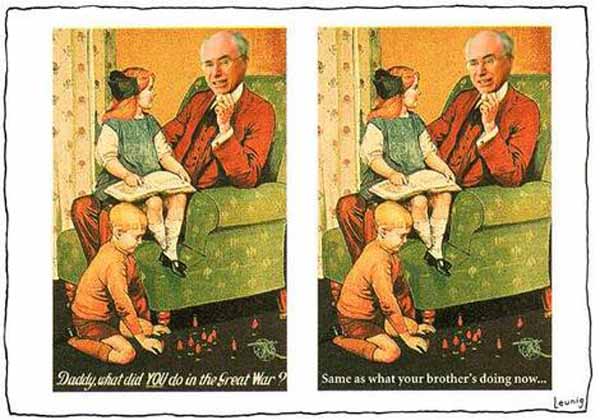 Leunig has done it again with this image

He also wrote a great piece on Hope for the paper last year.

When I woke up this morning I again thought with dismay of John Howard’s cynical comments about renewable energy yesterday. I genuinely do wonder how he is going to explain to his grandchildren why he delayed the growth of renewable energy? It was the first period of stable climate after the last ice age that allowed agriculture to develop. This then allowed the development of civilization. Sadly this civilization, that so many worked and fought for with its hard won human rights, is now being eroded – not just by climate change but by a range of policies that care more about the profit margins of the aluminium, cement, oil, coal, mining and electricity companies than about the children of this world who will inherit the damage they cause.

I do believe that the rhetoric of the debate should shift more from saving “the planet” and “saving the environment” to include saving “civilization”. Until we do this the debate can continue to be polarised between environmentalists and people who care more about jobs (by implication, civilization). A civilized approach, as we try to teach our children, implies working co-operatively (eg Kyoto), not selfishly. Saving carbon sinks by not cutting down forests which absorb CO2, for example, is all about saving people’s lives – not just people in forestry areas but all the people of the world. Everything and everyone is connected.

There is an argument that carbon dioxide will be in the air for 100 years, so therefore we should just get as rich as possible under the deluded belief that wealth will save us. Of course the rich people in the richer countries (New Orleans being a case in point, where the rich got out and the poor didn’t) “may” have the ability to withstand the effects of climate change a little better and “possibly” a little longer (eg. they’ll be able to afford to build desalination plants and put solar panels on their rooves but they still won’t be immune from disease and catastrophes). The rich will attempt to fight off invasion by climate refugees (instead of helping them to survive) or simply move to another country. But what will be the ultimate cost if we go down this path of continued fossil fuel and nuclear use? The cost will be a whole generation of people destined to live without hope because deep down everyone will know that they have put all their faith in finite resources and that the fighting over them will only get worse. Thirty years ago Jimmy Carter was smart enough to recognise the importance of hope in his Crisis of Confidence Speech.

Our children need to grow up with the sort of hope that we were all lucky enough to have …. and I’m determined to keep working for.

Hope that it will be possible for them to have a future without cruel and inhumane border security patrols and major infertility issues (caused by all the chemicals etc) as visualised in Children of Men. Hope that people will work together for a better world, not just fight to the death over limited resources. Hope that being kind, caring and compassionate will always be a respected value rather than a sign of weakness. How can you move on with hope when you have this uneasy knowledge that all the choices your leaders are making will leave behind huge problems (nuclear waste, pollution, war over limited resources etc). Surely the greatest degree of hope comes from knowing that once our energy structures are built they can continue for eternity because there will always be sun, wind and hot rocks and no-one needs to fight over them because there will be enough to go around … which is what I tell my boys about my love for them when they fight for my attention … love is a renewable and an unlimited resource!

Will our gift to our children be to have turned what was once a Lucky Country into a polluted desert or will we act now to give them a future worth striving for?

I’ve been so busy with my new permaculture course (my personal action), picking green tomatoes, struggling to work out the technicalities of setting up this blog, enrolling the children in tumbling and trampolining classes, shopping for food etc etc etc … that I almost made it to the end of the day without doing a political action. Thank goodness for The Getup Campaign!

Even after 11pm at night I can just logon, read about an important action and sign the petition. Today’s one is crucial for climate change action because if the Federal Government’s extraordinary legislation goes through it threatens to cut out many new voters, like young people, who may not yet be enrolled.

The legislation aims to close the rolls for new voters at 8pm on the very night the election is officially called – known as issuing a writ. Last Federal Election, the AEC received a total of 423,975 enrolment cards in the week between the announcement and the close of rolls. 78,816 of those were new enrolments. But this time people won’t get that chance.
Closing the rolls early will make it especially difficult for certain groups, such as Australians overseas. The legislation also contains other problematic elements. There are a lot of questions raised by these changes, so to help you wade through them GetUp has prepared answers to the common questions.

Sign the petition and join the call to overturn this legislation. You can also visit the Australian Electoral Commission website to check your enrolment, register for the first time or update your details.

“The Government should actively respect and encourage the right of every eligible Australian to vote.The recent changes to our Electoral Act should be revoked, and strategies that make it easier, not harder, for Australians to have their say at election time introduced.”