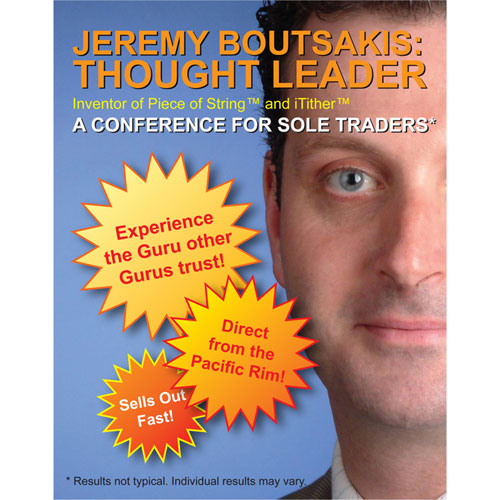 For some time now it’s been bleedingly obvious that we’ve been lacking true leadership – someone with vision, wit and the ability to inspire. At last, however, it appears that a contender has appeared – a visionary who can lead us into our Brave New World!

Thought Leader Jeremy Boutsakis is the leader we deserve. In a country where the economy is God (as I’ve been saying a lot lately) here at last is the motivational-business-thinker guru we’ve been waiting for. Mr Boutsakis knows we need a new strategic plan and has found a way to show us that Sole Trading can liberate us all.

Jeremy is a â€˜one-man brandâ€™ who can teach us that altruism just needs more marketing spend – he is a skewer through the narcissism of our times, a masterclass in self-obsession, and he will be with us in Blackheath for one night only (before heading to the Edinburgh Fringe Festival). His goal is to help shine light on the way we can all move forward with his unique and inspirational CONFERENCE FOR SOLE TRADERS.

This is a once in a lifetime opportunity to experience the Guru other Gurus trust at The Blackheath Golf Club this coming Friday 13th July at 8pm. He has picked this truly scary day to show us that the future need not be filled with fear but can, instead, be tackled with humour and insight.

In a wildly generous gesture Mr Boutsakis will donate the whole proceeds of A CONFERENCE FOR SOLE TRADERS to Blackheath Climate Action Now … yes, that’s right, every $10 that is paid at the door will go to Blackheath CAN. Join with us now to honour and learn from this truly gifted Thought Leader. To see some rare footage of this hero of our times click here or here.

and if you need a lift from the station to the Golf Club, email us before Friday. I promise someone will stay sober enough to drive you back!

Meanwhile, though I don’t have investments myself, I made a point today of clicking on a poll sent out by a Credit Union to gauge people’sÂ  views on investing in uranium stocks (it’s on the right hand side of the page) – this is where it stands currently … even with my vote (and no, this is not a joke):

On a personal level, with school holidays still continuing here in Queensland, I saw the error of my ways earlier this week and packed lunch and snacks in re-usable plastic bread bags …. phew, no more packaging waste today. I was also the firmest I’ve ever been and refused to allow the boys (this is a first for me) to use any of those electronic pinball and other type games that were at the mini-golf – they burn up power and swallow money all day and all I could think about was little children in Africa watching us in disbelief. It was then easy to stand firm.

It is also sobering, now that we have rain and cooler weather, to remember that summer will return and to keep an eye on what’s happening in the northern hemisphere as America is sweltering in record heat – last week Phoenix’s temperature reached 46 C. And in an article by Adam Nossiter for the New York Times on the 4th July:

Drought Is Sapping the Southeast, and Its Farmers

Northern Alabama has become acre after acre of shriveled cornstalks, cracked red dirt for miles and days of unrelenting white heat. The regionâ€™s most severe drought in over a century has farmers here averting their gaze from a future that looks as bleak as their fields.

The drought is worst here, but it is wilting much of the Southeast, causing watering restrictions and curtailed crops in Georgia, premature cattle sales in Mississippi and Tennessee, and rivers so low that power companies in the region are scrambling and barges are unable to navigate. Fourth of July fireworks are out of the question in many tinderbox areas. Hay to feed livestock is in increasingly short supply, watermelons are coming in small and some places have not had good rain since the start of the year.

Struggling to pay their bills, farmers here in the Tennessee Valley say they are burning through cash reserves and staring at bankruptcy, as last yearâ€™s dry weather turned into a singeing drought this year. Gleaming steel grain bins that should be full of corn ready to become ethanol are virtually empty. Cattle sales are several times normal; the farmers have nothing to feed them. Harvest dayâ€™s expected small returns will be make-or-break time, farmers here say.

Meanwhile, elsewhere in Alabama, beetles are boring into bone-dry pine trees, threatening century-old stands. Lake levels are 10 feet below normal, and boathouses are sticking up out of the water.

There is also a drought in Southern California and much of the Southwest, but the one in the Southeast, encompassing more than a dozen farm-reliant states as far north as Ohio and Indiana, is more unusual, producing conditions not seen in more than 50 years in some places, and longer in northern Alabama.

Much of the region, government scientists say, is suffering from a rare sharp dry spell, though they are reluctant to attribute it to climate change. â€œIn terms of its intensity, this one is very severe,â€ said Donald Wilhite, director of the National Drought Mitigation Center at the University of Nebraska, Lincoln.

Most of northern Alabama, along with parts of Mississippi and Georgia, is rated D4, the centerâ€™s highest possible level of drought intensity, signifying an exceptional drought.

Scientists call it a cruel freak of nature, one that is causing misery to farmers at a critical period in the growing cycle and has already ruined a â€œstartlingâ€ proportion of Alabamaâ€™s agricultural output, said Douglas Le Comte, a senior meteorologist at the National Oceanic and Atmospheric Administration. Some 88 percent of the stateâ€™s corn crop is classified by the government as poor to very poor, along with 85 percent of its soybeans and 74 percent of its cotton.

â€œThe reality is, weâ€™re going to lose a significant amount of money this year,â€ said Stuart Sanderson, a fourth-generation farmer in Limestone County, east of here. The foothills of the Appalachians make an alluring backdrop, but the reality on the ground is grim.

â€œA disaster like this is one you never see coming. Weâ€™re looking at a 70 to 80 percent loss,â€ Mr. Sanderson said, standing by a useless field of shrunken cornstalks. The rare, stunted ear could only manage a few malformed grains.

Rainfall is at least 20 inches below the normal 32 inches and in some places far lower than that. Jerry Newby, president of the Alabama Farmers Federation, said: â€œItâ€™s gone from bad to worse. All of the corn is pretty much lost thatâ€™s not under irrigation.â€

On Monday, the entire state was declared a drought disaster area by the federal Department of Agriculture, making many farmers eligible for low-interest emergency loans. â€œNobody alive has

ever seen it like this,â€ said Perry Mobley, the beef and hay director of the farmersâ€™ federation. And the National Weather Service says conditions are unlikely to change until fall.

The governors of Georgia and Alabama called for prayer; rare showers in the following days made the front pages here earlier this week.

Out at Mr. Braggâ€™s 7,000-acre, third-generation spread just north of Huntsville, immediate worries are pressing: he is facing the classic farmerâ€™s debt squeeze, with heavy investment â€” $1 million in giant new silos, a down payment on an ethanol-based future â€” and little revenue to pay for it. Mr. Bragg is contemplating a $500,000 loss.

The drought takes a psychological toll. Mr. Bragg spoke of a tight feeling in the pit of his stomach when drought sets in. â€œMentally, we expect it,â€ he said, â€œbut genetically, we canâ€™t handle it.â€

The true reckoning will be unpleasant , and it will come later this year. â€œI donâ€™t plan on having to sell out this year,â€ Mr. Sanderson said. â€œBut thereâ€™s only so much I can handle. If we come out next year with another year like this, youâ€™re going to see a significant number of farmers go out of business.â€

OK, OK … come and have a drink and a laugh with us on Friday 13th and we’ll raise money for the school’s solar panels and nut trees to plant around Blackheath (while we can).

3 thoughts on “A Conference for Sole Traders”