No, not the blowdryer! Now I’m really angry. My blowdryer burnt itself out today and I can’t, in all conscience, replace it. Apparently you produce something like 240gm CO2 every time you blowdry your hair (a more conservative report suggested 34kg a year but still…) … not to mention all that yucky plastic. So, there you go, through no effort of my own I’ve taken my personal action for today – no more blowdrying.

I’m absolutely devastated. I can handle cutting consumption in almost every area of my life but my hair? not my hair! Ever since I’ve been a kid managing my very fine hair has been a key to keeping self esteem afloat. Miss a wash and its dull and limp. Miss a blowdry and it flattens to look like hair coloured gladwrap draped over my head. And winter! Why did it have

to cark it in winter. Now I’ll have to get up earlier to get my hair to dry before I leave the house. The only other option is to stick my head in the oven!

Oh well, the only thing for it is to try and harness my anger. (Perhaps if I stay angry enough it’ll make my hair stand on end all by itself.) Speaking of anger:

Sooner or later we’re all going to wake up and notice, because the future will be slapping us in the face. I vote sooner. I vote now. I vote today. I vote we scare the fuck out of them, and save the world.” (Sharon Astyk)

Today I started reading my copy of Clive Hamilton’s new book, “Scorcher: The Dirty Politics of Climate Change”. Hamilton is the Executive Director of the Australia Institute, appeared in the SBS series “Decadence” and has also written Growth Fetish, Affluenza and Silencing Dissent.

His book looks at why political leaders have been so slow to act and who the power players are who are setting the political agenda – most notably the aluminium, cement, coal, oil, mining and electricity corporations who happily describe themselves as the “Greenhouse Mafia”. 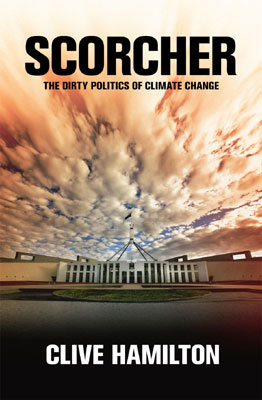 Because the Labor Party is meeting for its Annual Conference this weekend I decided for my action today that I’d ring Kevin Rudd’s office to voice my concern that they would overturn Labor’s No New Mines Policy and I also sent an email to a member of LEAN (Labor Environment Activists Network) suggesting they make building of cycle tracks to link towns an important priority. This is necessary as a safe low carbon transport option, addresses peak oil, is good for young people and would help a struggling tourism industry. Most importantly, as well, it would protect young people from being killed on the road. These things take so many years to get up that if I want my boys to be safe in ten years time I’ll have to put the hard yards in now.

the carbon footprint of one home